The global response to China’s filtering software Green Dam Youth Escort and the Iranian election are not only proof of the power of the internet as a democratic form of communication, but also as a lever for democracy itself. Columbia Professor Guobin Yang shows how. The Green Dam software program that the Chinese government is requiring all computers to carry starting July 1 is facing intense opposition. Meant to protect children from internet pornography, Green Dam also filers out politically sensitive web sites, leading many to question the software’s real intent. Indeed, the insidious nature of the program as well as its various flaws in protecting privacy – as noted by many netizens – has fomented a groundswell in opposition that has left Beijing struggling to save face. But as the Chinese citizens face encroachment of civil liberties, the Iranians have used the internet – by many twists and turns – to express themselves freely in the aftermath of the election debacle via Twitter and Facebook. The ballooning interest in human rights in China and Iran by netizens of multiple nationalities elucidates how the power of digital democracy is borderless. – YaleGlobal 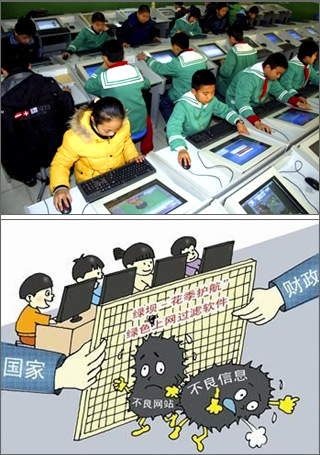 Damming evil: Chinese government is trying to prevent citizens and children from an unhealthy influence on the Internet with Green Dam Youth Escort software (below)

NEW YORK: Recent events in Iran and China have again demonstrated the global power of the Internet. Iranians used web technologies to broadcast their street protests to the world while Chinese netizens challenged a government policy to require computers to pre-install a new filtering software.

In Iran, protesters used the social-networking tool Twitter to communicate with the outside world when journalists’ access was restricted. Large numbers of tweeters individually reported the events with photographs, short messages, and links to videos and web sites. The result was a real-time communication network that beamed out information about the current Iranian crisis almost non-stop. This is the power of a new type of CNN – a Citizen News Network.

In China, the announcement of a government policy to require computers to pre-install a software called “Green Dam-Youth Escort” triggered a backlash of online protest. The policy was allegedly designed to protect minors from pornography and other “unhealthy contents” online. Although few would object to protecting minors and China undoubtedly has its share of trouble in battling Internet pornography, the new policy raises serious questions about its hidden intentions. People protested against an apparently intrusive policy suddenly imposed from above without going through any process of public consultation. The Chinese government has not changed the policy yet, but wide-spread online protest has put it on the defensive. 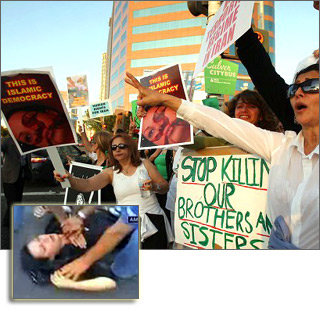 Internet control and activism are long-standing issues in the global arena. International media opinion typically swings back and forth between hope and despair in reaction to setbacks in control or victories of counter-control activism. News about the Chinese “Green Dam” software instantly set off fears about broadening Internet surveillance. Just as quickly, with a strong outpouring of opposition, fears changed to optimism. Such giddy change in public sentiments reflects the fluid nature of Internet politics in authoritarian countries. Yet behind the façade, one stubborn message persists – the Internet empowers ordinary citizens, especially under politically restrictive circumstances.

State efforts to contain the Internet in China and Iran are widely known. In China, the “Green Dam” policy marks only the latest attempt. What is puzzling is that such efforts have gone on for almost twenty years, and yet online citizen activism is becoming more, not less, powerful. Why?

Obviously, protest reflects people’s grievances. The protests in Iran are about possible election fraud and people’s demand for truthful information. Bloodshed and police brutality add fire to the oil of protests. In China, the protest against the “Green Dam” policy is about the blunt use of political power to force filtering software on consumers and people’s anger with the lack of transparency in the government’s policy-making process. Both cases come out of deep-seated frustrations with authoritarian government behavior. Both events draw crowds, online or offline, because the issues resonate with the public. In this sense, online activism will continue as long as people have grievances.

Yet there are more specific causes as well. First, the age-old truism about the dialectics of domination and resistance still holds in the information age, and with a digital touch. Part of the oppositional power derives from users’ sophisticated technical skills. In the “Green Dam” case, Chinese netizens lost no time in testing the software. International computer specialists like J. Alex Halderman and his colleagues in the University of Michigan joined in. The software was soon found to have serious security vulnerabilities and held up to mockery by Chinese netizens.

Mocking is an effective form of opposition in the Internet age, because savvy Internet users can mobilize all their technical and artistic skills to invent imaginative forms. Following an established trend of mocking state authorities in Chinese cyberspace, Chinese netizens created cartoon images of a so-called “Green Dam Girl” set to purify the web with the well-known surveillance tool kit of filters and censors (see images here). An instant hit, these hilarious images undermine state power through laughter. 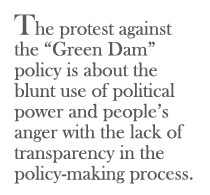 Increasingly, in China at least, online oppositional power depends on a new type of activist-bloggers. They write about a broad range of public issues, usually expressing dissent. Whenever major events or crises occur, readers can invariably turn to these bloggers for critical commentaries. Fully aware of the expectations of their audience, these activist-bloggers rarely fail to publish their critical responses. Indeed, the culture of the blogosphere is such that bloggers are compelled to produce for their audience to keep their names in the limelight. In the Green Dam case, it is these activist-bloggers (whom I will not name here) that quickly became the leading critical voices in Chinese cyberspace. Online activism hardly happens out of the blue, but has found a social basis in these activist-bloggers and their followers.

Further, online activism has sustained its power because it has become a vital link with the mass media. Tweets of protests in Iran would not have become so widely known and influential if they had not been picked up by the most powerful global cable networks. Similarly, online protests about the “Green Dam” software in China were encouraged when even some official media stories questioned the policy. This is by no means to underestimate the power of the Internet. One might just as well argue that mass media would not have been as powerful without citizens’constant news feeds from their tweets and blogs. The truth is that web power has become part and parcel of mainstream media power. Media scholars sometimes talk about the growing convergence between “old” and “new” media. Converging or not, the spectrum of media channels has vital connections, and the power of old or new media is enhanced by establishing such linkages.

To seize the attention of the mainstream media and the general public, Internet activists also depend on two mutually reinforcing resources: size and rhetoric. Large gatherings in the Freedom Square in Tehran or Tiananmen in Beijing generate a sense of power. On the Internet, large volumes of traffic are a sign of web power. And just as passionate rhetoric attracts crowds in the streets, so do surging passions online expand participation.

The tragedy of Neda, the young Iranian woman whose death by gunshot during a peaceful protest was captured on grisly video and subsequently posted on YouTube, is a telling example. The #Neda tag in Twitter stays among the top trending topics, because Neda has become a symbolic vehicle for ordinary people to express their political passions. “Just saw the YouTube video of Neda being murdered in the #iranelection protest. Absolutely horrifying,” goes one Twitter message. Another states: “In Memory of Neda. You did not die in vain.” When millions of such tweets shoot through cyberspace, their message reverberates far beyond. It is a message about the power of the web and of the people, and in the Internet age, web power is people power.

Guobin Yang is an associate professor at Barnard College, Columbia University. He is the author of “The Power of the Internet in China: Citizen Activism Online.” Click here for an excerpt.