Coping With the Newest Threat to Global Health - Fat

Obesity is as great a threat to global health as malnutrition, says Derek Yach, the Representative of the Director-General of the WHO. One billion people -or one out of six --are overweight worldwide - the same number as are malnourished - and some 300 million of those are clinically obese, leading to a global rise in chronic conditions such as cardiovascular disease, cancer, and diabetes. Surprisingly, the vast majority of deaths and disabilities from these obesity-related diseases occur in the developing world, taxing their already overburdened healthcare systems. Yach blames the globalization of marketing of food rich in fat and sugar, as well as urbanization and a decrease in physical activity for this phenomenon. He argues that the best way to counteract the trend is for the international community to create an environment that encourages companies to promote healthy choices. The WHO currently advocates a plan that incorporates the expertise of private sectors, NGOs, and consumer groups - steered by government action. Yach calls on the UN to get involved and amend the Global Compact to make health a condition for membership. New health criteria, Yach concludes, would challenge food companies' core business areas and strike a blow against global epidemics of obesity. - YaleGlobal

Coping With the Newest Threat to Global Health - Fat 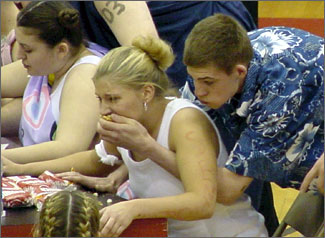 GENEVA: While malnutrition continues to afflict some one billion people globally, an equal number of people are now overweight, some 300 million of them clinically obese. Chronic conditions such as cardiovascular disease (CVD), cancers, diabetes and obesity, now account for almost 60% of total global deaths and 45% of the global burden of disease. Diet-related risk factors such as high blood pressure and high cholesterol now affect many hundreds of millions of people worldwide.

And these are no longer rich country afflictions. The globalization of the marketing and distribution of foods high in fats, sugar and salt, urbanization, together with a marked decrease in physical activity, are amongst the key causes that have resulted in chronic diseases dominating the disease profile of five out of World Health Organization's (WHO's) six regions; only in Africa do communicable diseases still dominate. The majority of this high toll of death and disability now falls in developing countries. Cardiovascular disease, which already accounts for one in three global deaths, is expected to be the leading cause of death in developing countries by 2010. India now has the most diabetes sufferers worldwide, with an estimated 31.5 million in 2000; China follows closely behind with 20.17 million. 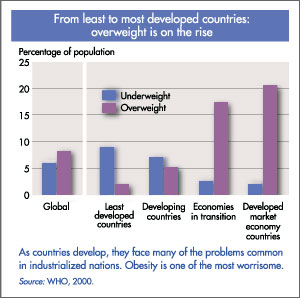 From least to most developed countries, overweight is on the rise.

This is leading governments worldwide to closely examine the mounting costs of health care. And for developing world countries, it is increasingly imposing a double burden of chronic disease, along with existing infectious and malnutrition-related conditions, upon health systems that are already inadequate.

Some western governments have already actively considered options such as taxing fatty food in the hope that, like the “sin” taxes on alcohol and tobacco, they will discourage consumption of unhealthy food. WHO has been engaged for the past year in proactive discussions with private sector food and beverage companies to urge them to commit to creating healthier food choices as part of wide-ranging consultations on the Global Strategy being developed on diet, physical activity, and health.

Imagine, then, that a major food company were to announce a review of its product lines to incrementally reduce sugar, salt and saturated fats. That it pledged to scrap trans-fatty acids - the main source of which is hydrogenated vegetable oils - from all products; ensure that marketing to children did not encourage excess consumption, but did stimulate physical activity; offer more fresh fruits, vegetables, and whole grain products; invest in new products with enhanced health potential; advocate mandatory physical activity in schools; and retire their most “obesity-related” lines.

How would the public health community react? Would they call it trickery, another profit-seeking gimmick? Or would they recognize it as a potentially massive gain for public health, and a positive signal to investors?

In July of this year, US food giant Kraft Corp laid down just such a challenge. WHO welcomed Kraft's announcement that it intended to reduce the fat content in its food, phase out in-school marketing and review the type of foods it supplied in food vending machines. Notwithstanding Kraft's motives, for a major food company to acknowledge that the global availability and marketing of unhealthy food poses a serious public health challenge - as Kraft did - is a highly significant step. 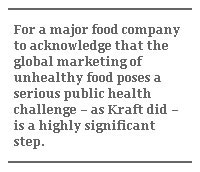 We are aware that other companies are researching similar strategic shifts, and encourage any serious attempts to ensure that healthy choices become easy choices for consumers worldwide. Such changes would be a victory for many in public health who have advocated and tried to legislate healthier choices related to diet and physical activity. But most importantly, consumers worldwide would benefit. If food companies go a step further, and acknowledge that making “healthy choices, easy choices” requires government and non-government actions to complement industry initiatives, real progress will happen.

WHO advocates a comprehensive approach to diet, nutrition and physical activity that draws upon the expertise and abilities of the private sector, NGOs and consumer groups - steered by government action. Only a few months ago, several food companies and their trade associations responded to this inclusive approach by denying that there was a global public health problem related to diet. When they did acknowledge it, many tended to minimize the role of industry in creating or resolving the problem.

Industry groups maintained that more physical activity was the solution to obesity, that most diet-related problems could be solved by individuals taking responsibility for what they ate and for a more active lifestyle. But they denied that specific foods played a role in obesity, cardiovascular disease or dental caries.

Now, a combination of pressures is influencing boardroom decisions like never before. These forces include a wave of popular books and media coverage; investment analyst reports on the financial risks for companies with "obesogenic" products; litigation against food companies and the attendant damage to brand image (even if cases fail); new legal and regulatory initiatives around the world; and consumer demand for healthier options.

Food company innovation to address public health demands will be based upon enlightened self-interest. This is understandable in a free market environment. Corporate leaders will stress that food companies are not like tobacco companies, and that policy measures used for tobacco control - such as those included in the WHO Framework Convention on Tobacco Control - do not apply to their products. More specifically, they are likely to push hard for an incentive-driven approach that acknowledges industry's role as part of the solution, and creates conditions for companies to compete on health grounds for future customers.

The public health community needs to be ready for these new approaches. It will take considerable skill and foresight to ensure that positive offers are embraced, and that areas of disagreement continue to be discussed.

In all likelihood we will head into relatively uncharted waters for food and nutrition policy. Food companies will expect better economic and regulatory incentives for them to be able to move faster. NGOs and consumer groups will continue to push for stronger regulations and laws in areas such as advertising to children, taxes on "bad foods", and better labeling. What may emerge is a collaborative approach that brings governments, industry and consumers together to review and resolve these issues. One existing example of such a co-regulatory approach is the Forest Stewardship Council.

At an international level, one policy change worth pushing is amendment of the UN Global Compact so that health, alongside environment, human rights and labor, is a condition for membership. New health criteria would challenge food companies' core business areas and, if implemented, lead to real health gains.

Over the next few months, public health advocates and policy-makers will find that food companies are changing faster than anyone anticipated. We need to be ready to suggest how to interact with those that demonstrate leadership in health and wellness. We need to avoid endless debates with trade associations that continue to oppose change. Provided we keep our focus on the attainment of public health, we should be able to use new forms of public-private interaction to make rapid progress against epidemics of diet and physical activity-related chronic disease.