Global corporate social responsibility (CSR) is often agreed about in theory, and has informed the policy of some governments. However, its implementation is still far from ideal. While some countries make no effort to promote CSR, even the ones that do have left the terms of compliance uncertain. CSR principles are often mandated, but corporations are rarely monitored. A number of European countries have created stiffer policies to help foster CSR. Canada hopes to make its own a government a model of social responsibility. The US, on the other hand, has yet to establish whether the government should play a role in global CSR. Many multinational corporations wish to be responsible global actors but lack a map for global corporate responsibility. Nevertheless, while multinational corporations can do more to prevent their presence from undermining sustainable development and the promotion of human rights, it is ultimately up to governments to define proper responsibilities. – YaleGlobal

WASHINGTON: After the flush days of the late 20th century, 2002 was not the best year for global capitalism. Global trade and investment declined dramatically. 2003 also looks to be a difficult year. As stock markets fall, and other dampers on the world economy like the war in Iraq, transatlantic trade tensions, and recession in the United States continue to proceed, global growth seems unlikely.

While the pace of globalization has slowed, investors continue to invest overseas in nations with inadequate governance. They do so for a wide range of reasons. For example, the cost of labor or regulatory compliance is often cheaper in the developing world than in their home countries. Sometimes firms have no choice: extractive industry firms must go where the oil or minerals are. Other times firms invest abroad because the potential market is large, as in the case of China. These factors may lead executives to pay less attention to potential problems such as an inadequate legal and regulatory system.

However, problems of inadequate governance can come back to haunt overseas investors. In early April, ChevronTexaco and Shell announced that they were reducing production and removing their employees from their Niger Basin, Nigeria operations because of continued violence by rebels and the government. These firms have been under considerable pressure to disinvest, although both firms have tried hard to encourage sustainable development in the areas of Nigeria where they operate. In this example, the firms were reluctant to disinvest after years of costly operations. But firms can also run into trouble with problems in their supply chain. In a March 31, 2002 ruling, US District Court Judge Jose E. Martinez ruled that cases brought by Colombian plaintiffs for human rights violations can go forward. The bottlers allegedly hired subcontractors to frighten workers who sought to unionize a Coca Cola bottling plant in Colombia.

In recent years, activist consumers and investors have developed a wide range of tactics to press global firms to promote human rights and environmental protection in developing countries. One such tactic is litigation. Some of the world's most prominent firms have been sued in American, Australian, Canadian, Belgian, and British courts for allegedly aiding and abetting human rights violations by governments of developing countries. Other stakeholders have used proxy fights, consumer boycotts, or public pressure to ensure that multinationals adopt corporate social responsibility strategies.

Most business leaders want their firms to behave responsibly everywhere they operate. But they, like policymakers and activists, are unclear about the proper role of the private sector around the world. There is no roadmap for global corporate behavior. Moreover, many executives believe they are simply market actors who meet their corporate responsibility by maximizing shareholder value. Others, however, believe that they must find ways to manage their operations in a socially and environmentally responsible manner.

In response to these developments, government leaders in many countries are trying to help business promote global corporate social responsibility. Citizens cannot rely solely on market forces to promote ethical behavior. Although markets have encouraged more firms to act in a responsible manner in the global economy, market forces have not been sufficient to ensure responsible behavior all of the time. The right mix of public policies can ensure that market forces do not penalize responsible firms for promoting human rights and sustainable development.

Our research in 2002 found that most governments have a wide range of policies that provide very explicit signals to corporations regarding their global corporate behavior. However, few governments have bundled these policies in a consistent, coherent manner or clearly defined the social and environmental responsibilities of multinational business. Great Britain, the Netherlands, and Canada are doing the most to promote global corporate social responsibility. The British government stands out because it has both developed a wide range of CSR policies and devised systems to evaluate them. Since 2001, Britain has appointed a CSR minister whose mission is to coordinate and evaluate CSR policies. The British government has also made promoting global CSR a foreign policy priority. They have led in promoting the OECD Guidelines on International Investment and Multinational Enterprises. The Guidelines address a wide range of issues regarding global corporate behavior, including child labor, human rights, sustainable development, technology transfer, and even how to encourage suppliers and subcontractors to abide by the Guidelines. The Guidelines have been signed by 36 nations, determined to set norms for global corporate operations. The signatories include all OECD members and Argentina, Brazil, Chile, Slovakia.

Governments who have signed the OECD Guidelines are required to establish a National Contact Point (NCP) to monitor implementation of the Guidelines and explain them to citizens and corporations. However, the Dutch government, has made the Guidelines the centerpiece of their CSR strategy. The Dutch Parliament mandated that all firms that want access to Dutch government funded export credits must show they are trying to adhere to these voluntary Guidelines. Executives from these firms must say they have read the Guidelines, but they do not have to detail how they have put the Guidelines into operation.

The Canadian government has taken a different approach. It is trying to ensure that the government itself becomes a CSR role model in the economy through its procurement, subsidies and employment policies. The government has issued standards for ethical procurement in recognition that government purchases are significant enough to change market behavior.

Several other governments have made major changes to corporate reporting requirements to encourage global corporate responsibility. For example, in 2002, the French government overhauled French corporate law and mandated the disclosure of companies' social and environmental as well as profit performance. The British, Germans and Belgians, among others, require pension funds to report on the social, environmental, as well as profit performance of their investments. Europeans also are beginning to debate whether CSR strategies can help European firms gain market share and more patient capital.

But the U.S. lags behind in discussing whether government can or should play any role in promoting global corporate social responsibility. America has a wide range of public policies that can promote global corporate responsibility. But many of these policies are not well known or effectively coordinated with other related policies. Global CSR policies include EPA regulations designed to ensure that corporations publish their environmental liabilities; procurement guidelines; legislation to ensure that managers act ethically in their international dealings (the Foreign Corrupt Practices Act); and human rights policies promoted by the Department of State. But these policies suffer from a lack of clear and consistent policy guidance. For instance, the US government has yet to clarify if firms are liable for the misuse of their products if such products are used to commit human rights abuses years later. 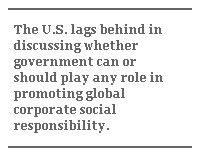 In addition, US policies are often inconsistent. They mandate certain behaviors, yet neither agencies nor private firms are monitored or evaluated for their adherence to such performance requirements. US policies can also send conflicting messages about the importance of policy goals. For example, the US says that protection of human rights should be a priority. However, the State Department has repeatedly asked that judges dismiss several key cases where plaintiffs seek to determine whether corporations can be held accountable in US courts for human rights abuses carried out by foreign governments against US citizens. And the US allows firms operating overseas to sell or use pesticides that are banned in the United States. While it is difficult to coordinate fully America's wide ranging policy goals, the United States should send consistent messages that human rights and sustainable development are foreign policy priorities.

Multinational corporations alone acting responsibly cannot save the world. General Electric may, as its jingle says, "bring good things to life", but it cannot end poverty. Archer Daniels Midland may claim it is the supermarket to the world, but it cannot ensure that no child goes hungry. Problems of poverty, malnutrition, and environmental degradation stem from inadequate governance. At the same time, the world's multinationals must do more to ensure that their global footprint does not undermine human rights or destroy the global commons. Ultimately, however, policymakers must do more to ensure that the rights and responsibilities of companies, citizens, and governments are well defined.

Susan Ariel Aaronson, PhD, and James T. Reeves are the Director and Associate Director of the Global CSR Policies Project at the Washington office of the Kenan Institute of Private Enterprise, Kenan Flagler Business School, University of North Carolina. They are the authors of Corporate Responsibility in the Global Village: The Role of Public Policy.