Crimes Under Flags of Convenience

The Sept. 11 attacks on the US may have awakened the world to the dangers of a passenger airliner being turned into a missile, but in malevolent hands a much more traditional mode of transport - a ship on the oceans - could be turned into dangerous tool. On the high seas, ships registered under flags of cash-strapped nations operate with very little oversight or regulation. As Singapore-based writer Michael Richardson shows, drugs, banned weapons, and contraband items are hidden in the cargo hulls of ships officially meant to be carrying goods as innocuous as timber or scrap iron. In the most recent extension of the global war on terrorism, however, the US is considering partnering with allies to interdict suspect ships on the open seas. Whether Washington will pursue this without a mandate from the United Nations is still uncertain. One course would be to tighten shipping regulations and enforce them better. But if there is any indication of an imminent transfer of weapons of mass destruction to a likely hostile group or nation, Washington - in its current mood - may decide that the end justifies the means. - YaleGlobal

Crimes Under Flags of Convenience 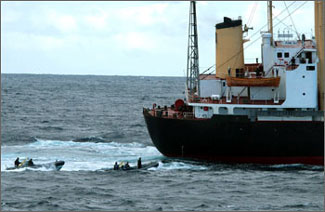 SINGAPORE - The recent capture of a North Korean freighter attempting to smuggle heroin worth $50 million into Australia has exposed yet again a fatally weak link in the regulation of global shipping. At a time when North Korea's nuclear ambition is causing world-wide concern, this fresh discovery is prompting the United States to consider working with like-minded nations to remedy the weakness. The strategy would be to scour the seas and interdict any North Korean-owned vessel suspected of trying to export dangerous materials to rogue states and terrorist groups.

The impounding of the 4,000-tonne Pong Su in Australia and the detention of its North Korean crew of 30 until they appear in court on August 12 is the latest of a long series of abuses involving ships sailing under a "flag of convenience" - the flag of a nation other than the home state. The Pong Su was registered in the small South Pacific island-nation of Tuvalu. The abuse of this practice has grown in recent years with the global recession and pressures to cut freight cost.

The problem facing the U.S. and other countries determined to stop weapons of mass destruction and the means of delivering them from getting into the hands of unfriendly states and terrorist organizations is that international shipping is vast and unevenly regulated. For a small fee, seagoing vessels owned by North Korea or other interests with criminal or terrorist aims can easily find the flag of another state under which to operate. 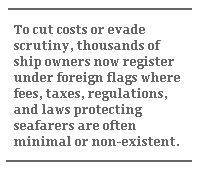 The North Korean freighter Sosun that was found to be carrying 15 scud missiles, conventional warheads and rocket propellant under a cargo of cement after it was stopped last December by U.S. and Spanish naval vessels in the Arabian Sea was registered in Cambodia. The Sosun was searched but then allowed to proceed to its destination in Yemen, an ally of the U.S. in the fight against terrorism.

The seizure of the Pong Su is the latest evidence of state-organized maritime smuggling of drugs and arms by North Korea to help pay for its nuclear and missile development program, prop up the embattled regime of Kim Jong-il, and prevent the derelict North Korean economy from completely collapsing.

Hawks in the Bush administration are arguing that the U.S. should seek to cordon off North Korean exports of drugs, missiles, and weapons of mass destruction, either through an economic embargo or by interdicting North Korean ships at sea.

Under international law, every ship must sail under the flag of a sovereign state to gain the protection of a government while on the high seas. The rules are also supposed to ensure that safety and other standards are maintained.

But to cut costs or evade scrutiny, thousands of ship owners now register under foreign flags where fees, taxes, regulations, and laws protecting seafarers are often minimal or non-existent.

As global trade shrinks because of the economic downturn, shippers demand lower freight costs. Some ship owners, often the least scrupulous with the oldest vessels, respond by registering wherever it is cheapest to do so. 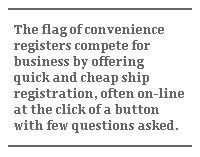 "Globalization has helped fuel this rush to the bottom," said David Cockroft, General Secretary of the International Transport Workers' Federation. "In an increasingly fierce competitive shipping market, each new flag of convenience is forced to promote itself by offering the lowest possible fees and the minimum regulation."

At least 40 states around the world, most of them developing countries, sanction open registers, or flags of convenience, as a way of making money. Some don't even have access to the sea. Land-locked Mongolia, for example, opened a register last March in Singapore, one of the world's busiest seaports.

The flag of convenience registers compete for business by offering quick and cheap ship registration, often on-line at the click of a button with few questions asked.

Nik Winchester, an analyst in the Seafarers' International Research Centre at Cardiff University in Wales, and a colleague spent three years researching and analyzing the regulatory capacity of 37 states that offer shipping flags, including national flags and open registers. Tuvalu was not among them. Nor was Mongolia.

But their flag state audit released earlier this year rated Cambodia and St Vincent and the Grenadines has having a "poor" capacity to regulate ships on their registers. It concluded that Antigua and Barbuda, the Bahamas, Barbados, Belize, Bolivia, Equatorial Guinea, Honduras, Lebanon, Liberia, Malta, the Marshall Islands, Panama and Vanuatu had only a "modest" regulatory capacity.

"A large number of open registers have failed to produce adequate regulatory regimes that ensure the safe operation of vessels, safeguard labor standards and ensure the transparency of vessel ownership," Winchester said.

The ITF says that in 2001, 63% of all reported ship losses at sea, measured by tonnage, were accounted for by just 13 flag of convenience registers and that the five worst performers were Panama, Cyprus, St. Vincent, Cambodia and Malta.

Cockroft said that since the terrorist attacks on the U.S. in September 2001, concerns had increased that terrorist organizations can own and operate ships in the flag of convenience system with impunity. “Arms smuggling, the ability to conceal large sums of money, trafficking in goods and people, and other illegal activities can also thrive in the unregulated havens which the flag of convenience system provides,” he added.

A Congressional panel in Washington last year held hearings on open registers amid reports that the U.S. and NATO countries were hunting up to 23 ships believed to be controlled by Al-Qaeda and operating under flags of convenience. There is also concern that a weapon of mass destruction could be smuggled by terrorists into the U.S. or another target nation via ship as a result of lax rules and checks.

Rohan Gunaratna, a terrorism expert at Singapore's Institute for Defense and Strategic Studies, said that transparent ship ownership was a very important issue because 95 percent of the world's trade goes by ship. "Many terrorist organizations have been known to use vessels registered in the 'HonPaLib' countries," he said, referring to Honduras, Panama and Liberia.

The Cambodian register has been among the most notorious flag of convenience operations in recent years - so notorious that the government in Phnom Penh - under pressure from the U.S. and the European Union - decided to terminate its contract last September after a series of scandals involving some of the more than 1,600 Cambodian-flagged ships.

In June, 2002, French commandos boarded the Cambodian-registered freighter Winner in international waters in the Atlantic amid an exchange of gunfire that injured one of the 12 crew members. The troops seized more than one tonne of Colombian cocaine worth well over $100 million in a cargo that was registered as scrap iron destined for Bilbao in Spain. Officials said that the raid was the result of 15-months of surveillance involving U.S., French, Spanish and Greek authorities.

In November, 2001, Irish customs officers found 20 million smuggled cigarettes on the Maria M, a Cambodian-registered freighter that arrived in Estonia supposedly carrying a cargo of timber. The cigarettes, concealed in the center of bales of timber, were liable to tax amounting to about three million Irish pounds. They were the largest haul of smuggled tobacco ever seized in Ireland.

Anti-terrorist officials said that the operation was organized by criminals with links to the Real IRA, a terrorist faction opposed the peace accord in Northern Ireland agreed to by the mainstream IRA, the Irish Republican Army.

South Korean and U.S. intelligence agencies had been concerned about an official North Korean connection to the Cambodia Shipping Corp., the company appointed by the Cambodian government in 1994 as the exclusive agent to register ships under the Cambodian flag. The connection was through a senior North Korean diplomat who was stationed for many years in Phnom Penh and was one of the founding investors in the company.

Intelligence agencies had noted the inclusion of North Korean vessels among ships that flew the Cambodian flag. A South Korean analyst said that such ships were suspected of smuggling North Korean ballistic missiles and components to Pakistan, Iran and Iraq.