When natural disasters strike citizens expect government – authoritarian or democratic – to provide fast, efficient relief using all means possible. This YaleGlobal series explores various responses to two crises, the fierce cyclone that struck the Irrawaddy Delta of Burma and the earthquake that hit the Sichuan province of China. Burmese generals have been slow to admit the need for assistance, deciding to let in aid workers from neighboring ASEAN nations and UN helicopters more than two weeks after the tragedy. Ships with relief supplies and more helicopters for quick delivery wait in the Bay of Bengal. But the generals fear too much help coming from any source other than their tightly controlled government would expose their own vulnerability and might encourage renewed protest against the regime. But that strategy is dangerous, explains author and journalist Bertil Lintner. The Burmese public, already reeling from the government’s brutal crackdown on protests led by monks in September 2007, may find the delays and resultant massive suffering unbearable. It might even enrage Burmese troops whose relatives are among the victims. Tactical gains from a closed-door policy could prove costly for the junta. – YaleGlobal

Afraid that a foreign presence would embolden citizens to protest, the Burmese junta limits access to the disaster area
Bertil Lintner
Wednesday, May 21, 2008 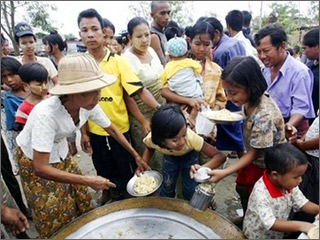 into the country compounds the misery caused by Cyclone Nargis; Burmese

queue for free rice on the outskirts of Rangoon

CHIANG MAI: Burma has at long last agreed to allow foreign medical workers into the country to help the victims of the devastating cyclone that hit the Irrawaddy Delta region and the main city of Rangoon on 2 May – but with a catch. Setting conditions that fall short of what the international community, including the United Nations and its various agencies, had requested, the ruling military junta insists that the foreign medics and other aid workers come from neighboring countries.

Singapore’s Foreign Minister George Yeo announced the decision after a meeting with the Association of Southeast Asian Nations, or ASEAN, of which Burma is a member. ASEAN will also serve as a “bridge” between international agencies and the worst-affected areas of southern Burma.

It’s unclear how this effort will be coordinated, especially given the magnitude of the disaster. According to the United Nations, 2.4 million people have lost their homes or planted rice fields. Experts at Johns Hopkins University’s School of Public Health, based on their own research, said as many as 3.2 million Burmese have been affected. 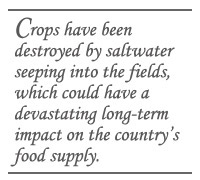 More than 40 percent of those affected are children – that in a region where young people already suffer from malnutrition. Drinking water is in short supply as most sources have been contaminated by decomposing corpses. Entire villages have been wiped out with hardly a building standing – except for the Buddhist temples, usually built from stronger material than ordinary, wooden houses. Crops have been destroyed by saltwater seeping into the fields, which could have a devastating long-term impact on the country’s food supply.

The situation in Burma today is comparable only to what happened in Aceh, Indonesia, after the December 2004 tsunami, and clearly requires more extensive international effort than what the military rulers of Burma have accepted.

Behind their reluctance to admit foreigners lies the main fear: to lose control and, ultimately, power. Burma’s partners in ASEAN are seen as no threat, but the regime is loath to allow aid providers from Western countries, which have been sharply critical of the military regime.

Unfortunately for Burmese victims, only the Western countries have the capacity of response matching the magnitude of the crisis. The US amphibious assault ship USS Essex, is moored 60 nautical miles off Burma’s southern coast, while the French naval ship Le Mistral waits in the same waters. Tens of thousands of gallons of drinking water, ambulances, heavy trucks and medical teams could reach Burma within an hour by helicopters and landing craft from the USS Essex. Le Mistral carries a cargo of 1,000 tons of food, enough to feed at least 100,000 people for two weeks, as well as thousands of shelters for the homeless.

Burma’s reclusive government is unlikely to allow those ships to carry out their missions. If foreign troops – which must oversee the distribution of the supplies – entered Burma, their presence could embolden the country’s citizens to launch another uprising against the regime. Ordinary Burmese are already angered because of the bloody crackdown on pro-democracy demonstrations led by Buddhist monks in September 2007. If anti-government activists thought they could count on foreign protection – even if the foreign troops were in Burma on a purely humanitarian mission – they could take to the streets again.

Whatever sympathy there might have been for the country’s military junta has dwindled in the wake of the cyclone. The generals must be aware of this – worrying more about their future now than they had eight months ago. Hence, troops from foreign countries that have criticized the regime and expressed support for Burma’s pro-democracy movement must be kept out at all cost, no matter how much food and medicine they could supply. Similar concern about the regime’s stability has led the military to try keeping the country’s Buddhist clergy from participating in relief efforts, fearing a renewed alliance between the monks and population at large.

Much depends therefore on what happens when the ASEAN teams arrive on the scene. India has also pledged to send medics, if needed, and more than 60 Chinese doctors reportedly wait across the border in Yunnan for permission to travel to the affected areas. So even without Western participation, it will be the biggest foreign intervention in Burma since independence from Britain in 1948. And even if the teams are made up of “friendly neighbors,” leery of interfering in the internal affairs of Burma, the generals risk losing control of the situation – which in the long run, could undermine their grip on power.

Under such circumstances, it’s likely that Burma’s generals will continue to cling to their ASEAN partners. India and China are big and powerful, and the generals don’t really trust either. China, more than any other country, may have supplied Burma with military hardware since the generals crushed the first main uprising against their rule in August-September 1988. But China is a new friend for the generals. During the decade spanning 1968-78, China provided massive support for the insurgent Communist Party of Burma (CPB) – and junta leader General Than Shwe as well as his deputy General Maung Aye spent years fighting the CPB in the northeastern mountains, watching Chinese bullets kill their men. The CPB collapsed in April 1989 following a mutiny among the hill-tribe rank and file of its army against the party’s aging, mainly Burman Maoist leadership.

But China continues to maintain close relations with the successor of the CPB, the United Wa State Army. The UWSA has a ceasefire agreement with the Burmese government, but nevertheless has strengthened its forces in recent years and, according to Jane’s Intelligence Review of March 2008, taken delivery of Chinese-made 12.7-millimeter and 14.5-millimeter anti-aircraft guns and 122-millimeter howitzers, apart from mortars and small arms. Clearly, the Chinese are not putting all their eggs in one basket; if something were to happen to the military rulers of Burma, Beijing would still have a foothold inside the country. 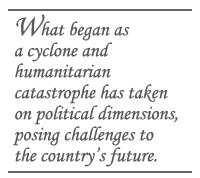 Relations with India are more complex. The role Indian migrants played as intermediaries between the colonial British and the native population has not been forgotten and has given rise to sometimes fierce anti-Indian sentiments. Even today, people of South Asian origin are often looked down upon in Burma, referred to as “kala,” a Burmese pejorative for “foreigner” or “Indian.” As for the generals, they remember that India until recently was a staunch supporter of the country’s pro-democracy movement. But, to counter China’s growing influence in Burma – and take advantage of new trade arrangements – India has moved closer to the generals.

Burma is likely to accept some aid from China and India, while keeping some distance. ASEAN will remain the main partner on the ground and conduit for aid from other countries. At the same time, international pressure on Burma is bound to continue, especially if the limited effort proves inadequate for Burma’s needs.

In short, Burma’s generals are in for a delicate balancing act. They must also maintain the hitherto remarkable unity among top level officers – as well as the loyalty of the rank and file of the armed forces, many of whom have relatives affected by the cyclone.

What began as a cyclone and humanitarian catastrophe has taken on political dimensions, which could open a series of challenges and different scenarios for the country’s future. Generals Than Shwe and Maung Aye should consider their options – because it’s far from certain that they’ll be part of that future.