The United States and Cuba are reopening their respective embassies and preparing for more exchanges in diplomacy and trade. “Cubans and Americans are equally curious about exploring the other side since December when President Barack Obama and Raúl Castro made the surprise announcement on restoration of full diplomatic relations between the two countries,” writes Patricia Alejandro, a Harvard law student. “Both sides concede the process will be gradual, yet changes in leadership that paved the way for rapprochement are inevitable – Obama leaves office in January 2017, and Castro, now 84, announced intentions to retire in 2018.” The Cuban-American community could help boost ties between the two countries. As of 2013, more than 1.1 million Cuban immigrants resided in the United States, reports the US Congressional Research Service. The Cuban government is wary about foreign investment, and the United States will press for improved human rights. Cubans are eager for an end to the US embargo, along with new electronics, cars and internet service, while US tourists are nostalgic for the Cuba of the early 20th century. Economic imbalances and challenges to normalize relations are many, but there's likely no going back. – YaleGlobal

Castro and Obama balance gradual normalization with showing benefits for both US and Cuba
Patricia Alejandro
Thursday, July 23, 2015

CAMBRIDGE, MA: During the 1990s, the popular assumption was that most Cubans, if they had a choice, would leave their country for the United States in a heartbeat. Today, while many Cubans still try to cross international waters to reach the United States, many more are looking towards developing Cuba, from inside and outside. US tourists are drawn to the mythical colonial Cuba, of antique American cars and fine cigars, and investors hope to rebuild golf courses and resorts. Cubans want to move into the future as quickly as possible, craving electronics, accessible internet and new cars.

Cubans and Americans are equally curious about exploring the other side since December when President Barack Obama and Raúl Castro made the surprise announcement on restoration of full diplomatic relations between the two countries. Both sides concede the process will be gradual, yet changes in leadership that paved the way for rapprochement are inevitable – Obama leaves office in January 2017, and Castro, now 84, announced intentions to retire in 2018. Normalizing relations ends near six decades of hostility that began in 1956 after Raúl’s older brother, Fidel Castro, led an army of guerrilla fighters into Havana and became prime minister. The United States broke off relations and imposed a trade embargo in 1960 after Cuba nationalized US businesses without compensation.

Cuba has been reluctant to allow foreign direct investment and relinquish control – less than 1 percent of GDP – at 0.1 percent. US businesses are eager to return to the island nation. US congressmen, governors and corporate leaders have traveled to Cuba to discuss trade opportunities. Other countries, such as Canada, have had a head start in doing business in Cuba. China, a leading creditor for Cuba and its second largest trading partner after Venezuela, already invests heavily in the tourism industry and oil drilling.

The United States could benefit from its community of Cuban Americans, more than 1 million in all, connected and aware of Cuban culture and ways of doing business. Despite excitement about the potential for reviving commerce, barriers remain including the US embargo and Cuban’s dual-currency system. The Cuban government plans to unify the system before 2016. Currently, most Cuban wages are paid in pesos, but commerce and tourism rely on convertible pesos, pegged to the US dollar and equal to 24 pesos. Cuban Central Bank officials have told foreign businesses that devaluation of the convertible peso will progress gradually. Meanwhile, tourists currently cannot use credit cards or conduct internet transactions with Cuban vendors. Airbnb, the online service that matches visitors with residents willing to rent out all or parts of their home, opened in Cuba this year and conducts transactions using a middleman agency.

Ditching the dual-currency system will ease tourist transactions, but reduce Cuban salaries, already considerably low. The government still controls most salaries in Cuba, so future raises depend on what the government can afford. Doctors recently had a 150 percent pay raise, from around $25 to more than $60 per month, but the average Cuban continues to earn around $20 per month. Meanwhile, Cuban foreign debt is in the billions, even after Russia forgave $32 billion of Soviet-era debt in 2014. 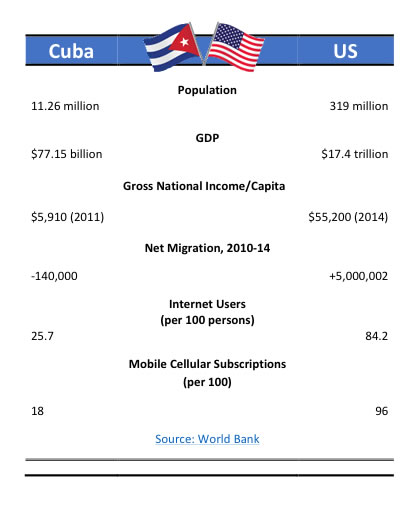 The UN General Assembly has voted 23 times to end the US embargo, with the United States and Israel typically opposed and a handful abstained. Obama has chipped away at the embargo, contributing to more agricultural trade and people-to-people exchanges. Each year at the Summit of the Americans, members criticized the United States, but only Congress can eliminate the embargo in its entirety. Congressional ranks and Cuban Americans are divided. Demographics have shifted, with most Cuban-American constituents supporting restored relations. Surveys conducted by the Institute of Public Research and the Cuban Research Institute of Florida International University show that 68 percent of Cuban Americans support dialogue with the Cuban government compared with 40 percent in 1991. Groups like Engage Cuba lobby Congress and businesses to support the normalization of relations and reforms in US travel and trade restrictions.

Cuba’s pristine white sand beaches and preserved colonial architecture are already a lively tourism destination, with near 3 million visitors last year, most from Canada and Europe. In the first quarter of 2015, one million tourists visited the island, including more than 50,000 Americans. With Cuba in the news, tourism has surged and the numbers could strain accommodations and services. Since January, Americans no longer need to obtain special permission to travel directly to Cuba and need only declare that they fall into one of 12 special categories including family visits, official government business, journalism, professional research, and education and religious activities.

Self-employed entrepreneurs, or cuentapropistas, have increased since the Cuba government loosened restrictions a few years ago. Still, many struggle to find supplies required to run their businesses. Restaurant owners make do without ingredients as basic as wheat, milk or butter, let alone high-end ingredients expected by tourists. The country still imports more than three quarters of its food, and business owners lack capital, with many relying on remittances and supplies sent by family members abroad.

Only 200 occupations are open for Cuban entrepreneurs, who are barred from opening private retail or imported-clothing stores, private medical practices, or private martial arts studios. Retail stores are government-owned, and US investors will proceed cautiously, assessing the stability of the Cuban market and political risks before opening operations in Havana. The US Department of Commerce is preparing small business owners for the intricacies of global markets with programs like the Presidential Ambassadors for Global Entrepreneurship.

With an entrenched black market and associated corruption, the road is not easy for foreign investors or small businesses in either market.

Most Cubans have never been abroad, with a plane ticket costing more than what the average Cuban earns in a year. In 2013, the Cuban government eased restrictions on Cubans leaving, allowing travel with passport and national identity card and removing the requirement of a re-entry permit. But Cubans must still obtain entry visas from other countries. In 2013, the United States began issuing multiple-entry visas that last five years.

Recently, Cubans have increased educational and professional development trips to Miami, but the government remains concerned with a brain drain and will monitor if economic development and improved relations encourage professionals, particularly health care workers, to remain in Cuba or seek lucrative positions overseas. Notable defectors in recent years include US Major League Baseball’s Yasiel Puig, physician Ramona Rodriguez, and six dancers with the National Ballet of Cuba.

Rapid economic development could interfere with the tourism industry’s attachment to 1950s-era Cuba, a tropical paradise of beaches, casinos and nightclubs. For now, Obama and Castro express determination for gradual improvements in diplomatic relations, economic development and the tourist sector to avoid social disruption.

With embassies reopened, the US and Cuba anticipate the appointment of ambassadors soon. The policy will help US ties with other Latin American nations. The United States removed Cuba from its list of state sponsors of terrorism, and negotiations progress steadily. The United States expects freedom of movement for its diplomats and greater respect for human rights, while Cuba remains wary about US intervention in its internal affairs, including assisting dissidents and democratic initiatives.

More than 11 million Cubans along with thousands more who left their homeland since 1956 anticipate normalization of relations to proceed with benefits for all involved.