Dams in China Turn the Mekong Into a River of Discord

The Mekong, one of the world’s major rivers, starting in Tibet and flowing through south China, Burma, Thailand, Laos, Cambodia, and Vietnam, provides sustenance through irrigation and fishing to those living in its basin. But it also provides hydroelectric power through dams, three of which were built in China and with more planned. And it is precisely these dams that are now threatening the water supply, the livelihood of those living downstream, and the relations between China and its southern neighbors, according to Michael Richardson, senior research fellow of the Institute of South East Asian Studies. A fourth Chinese dam, Xiaowan, that should generate 4,200 megawatts of power, could affect the level of fish stocks in Cambodia and water supply for Vietnam’s rice fields. But China contends controlling the water flow will prevent the adverse effects of erosion caused by the Mekong’s flooding cycle and will supply renewable energy. Winning the debate or coming to a workable compromise is further complicated by China’s refusal to join the Mekong River Commission, an inter-government agency whose members include the four of the downstream countries. And though the global financial crisis has put on hold other dams being planned by the downstream countries, China is moving ahead with its plans. For now, there is time to assess how China’s dams may affect the other regions. But as this story shows, exploiting the natural resources that cross borders on a fair and equitable basis requires not only inter-government coordination, but also a knack for expecting the unexpected. – YaleGlobal

Dams in China Turn the Mekong Into a River of Discord

SINGAPORE: Back in 1986, when China began building the first of a series of dams on the Mekong River, hardly anyone in the downstream countries of Southeast Asia paid attention. But today, as China races to finish the fourth dam for generating electricity on the upper reaches of Southeast Asia’s biggest river, concerns about possible environmental impacts in the region are rising fast. Moreover, fear about antagonizing China and Southeast Asia’s internecine dispute might make any concerted move unlikely.

The sheer scale of China’s engineering to harness the power of the Mekong and change its natural flow is setting off alarm bells, especially in Vietnam, Cambodia, Thailand and Laos, the four countries of the lower Mekong basin where more than 60 million people depend on the river for food, water and transportation.

A report in May by the United Nations Environment Programme (UNEP) and the Asian Institute of Technology (AIT) warned that China’s plan for a cascade of eight dams on the Mekong, which it calls the Lancang Jiang, might pose “a considerable threat” to the river and its natural riches. In June, Thailand’s prime minister was handed a petition calling for a halt to dam building. It was signed by over 11,000 people, many of them subsistence farmers and fishermen who live along the river’s mainstream and its many tributaries.

Some analysts say that if the worst fears of critics are realized, relations between China and its neighbors in mainland Southeast Asia will be severely damaged. But mindful of the growing power and influence of China, Southeast Asian governments have muffled their concern. Meanwhile, Laos, Cambodia and Thailand have put forward plans to dam their sections of the Mekong mainstream, prompting Vietnam to object and undermining the local environmentalists’ case against China.

Although the Mekong is widely regarded as a Southeast Asian river, its source is in the glaciers high in Tibet. Nearly half of the 4,880 kilometer river flows through China’s Yunnan province before it reaches Southeast Asia. Since there is no international treaty governing use of trans-boundary rivers, China is in a dominant position, controlling the Mekong’s headwater. It has the right to develop its section of the river as it sees fit, and has done so without consulting its neighbors, let alone seeking their approval.

The Mekong River basin drains water from an area of 795,000 square kilometers. The Mekong River Commission (MRC), an inter-governmental agency formed in 1995 by the four lower basin countries estimates that the sustainable hydropower potential of the lower basin alone is a massive 30,000 megawatts. But it also says that there are major challenges in balancing the benefits of clean electricity, water storage and flood control from the dams against negative impacts. These include population displacement, obstruction to fish movements up and down the river, and changes in water and sediment flow. 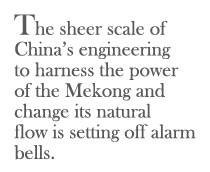 The cascade of dams being constructed in Yunnan will generate over 15,500 megawatts of electricity for cities and industries, helping to replace polluting fossil fuels, particularly coal and oil. The eight Yunnan dams will produce about the same amount of electricity as 30 big coal-burning plants.

The fourth of China’s Mekong dams, at Xiaowan, is due to be completed by 2012 at a cost of nearly US$4 billion. Rising 292 meters, the dam wall will be the world’s tallest. Its reservoir will hold 15 billion cubic meters of water, more than five times the combined capacity of the first three Chinese dams. Since the end of 2008, when the river diversion channel of the Xiaowan hydropower dam was closed by Chinese engineers, the reservoir has been filling with water, paving the way to start the first electricity generating turbine in September. When full, the reservoir will cover an area of over 190 square kilometers. With a capacity to generate 4,200 megawatts of electricity, Xiaowan will be the largest dam so far on the Mekong.

However, by 2014, China plans to finish another dam below the Xiaowan at Nuozhadu. It will not be quite as high but will impound even more water, nearly 23 billion cubic meters, and generate 5,000 megawatts of power.

Chinese officials have assured Southeast Asia that the Yunnan dams will have a positive environmental impact. They say that by holding some water back in the wet season, the dams will help control flooding and river bank erosion downstream. Conversely, releases from the hydropower reservoirs to generate power in the summer will help ease water shortages in the lower Mekong during the dry season.

However, the UNEP-AIT report said that Cambodia’s great central lake Tonle Sap, the nursery of the lower Mekong’s fish stocks, and Vietnam’s Mekong Delta, its rice bowl, were particularly at risk from changes to the river’s unique cycle of flood and drought. The Cambodian lake is linked to the Mekong by the Tonle Sap River. Scientists are concerned that reductions in the Mekong’s natural floodwater flow will cause falls in the lake’s water level and fish stocks, already under pressure from over-harvesting and pollution.

Vietnam worries that dwindling water volumes will aggravate the problem of sea water intrusion and salination in the low-lying Mekong Delta, where climate change and sea level rise threaten to inundate large areas of productive farm land and displace millions of people by the end of this century.

The MRC says it has been discussing technical cooperation with Chinese experts to assess downstream river changes caused by hydropower development. But China has refused to join the MRC or to agree to observe its resource management guidelines, preferring to remain a “dialogue partner”. Full membership would intensify scrutiny of its dam plans by downstream Southeast Asian states and increase pressure on Beijing, which controls 21 per cent of the water, to take their interests into account. 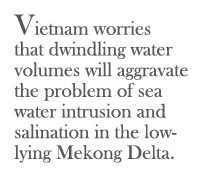 While China’s program to dam the Mekong is moving ahead on schedule, proposals to do the same on the Southeast Asian section of the river have been put on hold. Before the global credit crisis and economic slow-down hit Asia’s export-oriented economies with full force this year, Cambodia, Laos and Thailand had announced plans to follow China’s lead on the upper Mekong by building a series of dams on the mainstream of the river in the lower basin. There are now over 3,200 megawatts of electricity being generated on Mekong tributaries in Laos. But that too is being hurt by the crisis as Thailand, the main consumer of electricity in the lower Mekong, has announced that because of the global economic downturn, it expects to cut substantially the amount of power it imports from Laos.

The slowdown, however, provides a breathing space for Southeast Asian countries to assess how the Mekong mainstream dam projects will affect the interests of people in the river basin. But without China’s full participation, no Mekong management plan can be effective.

Beijing is intent on forging closer economic integration with mainland Southeast Asia through trade, investment, communication, transport and energy cooperation with its neighbors in the Greater Mekong Subregion. But this strategy may backfire if the region concludes that Chinese dams are having an adverse impact on their future development prospects.

Michael Richardson is a visiting senior research fellow at the Institute of South East Asian Studies in Singapore.