A Dangerous Void in Pakistan

Many analysts had hoped that the democratic elections in 2008 and the resulting civilian government might stabilize Pakistan. Instead, a dithering and weak government which tried to buy off Islamic militants by a controversial ceasefire now face a breakdown of the ceasefire, in the midst of new terrorist attacks, political protests and economic meltdown. The result is that NATO and the US, fighting to bring order to Afghanistan since 2001, and about to send more troops to the region, can no longer count on Pakistan as a reliable ally, explains journalist and author Ahmed Rashid. Instead, Taliban militants extend their reach and rigid ways into the Swat Valley, barely 100 miles from the capital Islamabad and threaten the doorstep of Peshawar. In an audacious move, the terrorists attacked the Sri Lankan cricket team right in the heart of Lahore, the cultural capital of Pakistan. The Obama administration may try a regional approach in pursuing stability, but extremists too are uniting diverse factions together to challenge the US forces in Afghanistan. The fast spread of extremism, combined with a lack of strong political leadership in Pakistan, guarantee chaos in the months ahead as the US and international forces gear up for the spring offensive from the reinvigorated Taliban. – YaleGlobal

A Dangerous Void in Pakistan

As the US plans to send more troops to Afghanistan, the country next door seems rudderless
Ahmed Rashid
Wednesday, March 4, 2009 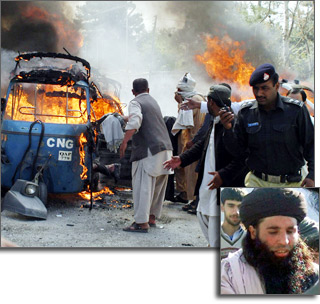 LAHORE: Just as the Obama administration tries to get a handle on Pakistan – a critical part of its regional approach to sorting out Afghanistan and defeating the Taliban – the country takes another spiral downwards, virtually negating options Washington considered before. Almost in a mirror image of the financial crisis that galloped ahead of the solutions that governments devised, the situation in Pakistan deteriorates at a pace faster than policymakers can grasp. Most worrisome in the developing crisis is the leadership void in Pakistan, without which talk of any solution would be a fruitless exercise.

The governmental weakness was demonstrated dramatically recently while Pakistani Foreign Minister Shah Mahmood Qureshi took part in a crucial trilateral meeting in Washington with the US and Afghanistan, back home the government virtually ceded control of part of the country to the Taliban. The meeting was designed to input policy options before Richard Holbrooke, the US Special Envoy for Afghanistan and Pakistan which President Barack Obama is supposed to sell to NATO at its summit on April 2. Meanwhile in Pakistan, a controversial ceasefire with Taliban militants in the Swat valley was on the verge of breaking down, economic indicators spiraled down further and the Supreme Court's controversial verdict to disqualify opposition leader Nawaz Sharif from taking part in politics and ousting his brother Shabaz Sharif from being chief minister of Punjab province, plunged the country into fresh political crisis. A terrible week was capped by a terrorist attack on the visiting Sri Lankan cricket team in the heart of Lahore. 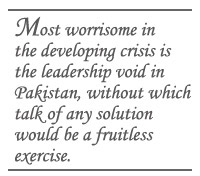 Hopes that the 2008 election of the democratic and secular Pakistan Peoples Party government would bring political parties together to address these problems have been thwarted by the PPP trying to isolate the long-time rival Sharif brothers. President Asif Ali Zardari is now deeply unpopular for refusing to reconcile with the opposition and failing to address long-term issues such as terrorism and the economy.

The Sharifs are now rallying their supporters to join lawyers who plan a protest in Islamabad for mid March ostensibly to reinstate the former Chief Justice Iftikhar Chaudry, but in reality to try and topple Zardari. The country that can least afford more political turmoil will see just that. With such a rolling crisis, US policy options to help Pakistan are more difficult to ascertain. And yet Pakistan's crisis is a matter of major concern for not just Pakistan, but the region and the international community. President Obama told a US television station recently that Pakistan ''was endangered as much as we are.'' The expansion of the Pakistani Taliban across northern Pakistan and the safe haven that the leaders of the Afghan Taliban and Al Qaeda have along Pakistan's borders with Afghanistan present a major global security threat, as does its collapsing economy.

Both the government and the army have already agreed to a controversial ceasefire in the Swat valley east of Federal Administered Tribal Area and just 100 miles from Islamabad - which virtually cedes control of the valley to another branch of the Pakistani Taliban.

The deal has been struck with Maulana Sufi Mohammed, a radical cleric freed last year after spending six years in jail for leading 10,000 Pashtun tribesmen in a vain attempt to oppose the US invasion of Afghanistan in 2001. He led a peace march through Swat to convince his son-in-law Maulana Fazlullah, who leads the Swati contingent of the Pakistani Taliban and is closely allied to Al Qaeda, to accept the government's offer of a ceasefire in exchange for enforcement of Sharia law in the valley.

The US is adamantly opposed to such ceasefires, which in the past have only strengthened the Taliban, while the exhausted and demoralized Pakistan army welcomes them. The government insists the legal change will be a limited application of Islamic justice through the local courts, the Taliban interpret it as allowing full application of Sharia law for all aspects of education, administration and law and order in the region. Fazlullah's men, aided by Uzbek, Chechen and Arab jihadis fought bloody battles with the army over the past two years, finally driving the army out and taking control of most of Swat last year. The fighting has led to some 1200 civilian deaths and the forced exodus of an estimated 350,000 people out of a population of 1.5 million. Fazlullah has blown up 200 girls schools, hanged policemen and teachers, set up Sharia courts and now runs a parallel government.

Even though the former military regime of President Pervez Musharraf concluded several controversial short lived ceasefires with the Pakistani Taliban, the government never previously conceded major changes to the legal or political system. 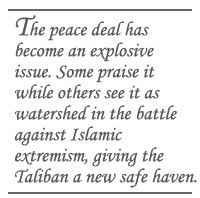 The peace deal has become an explosive issue in Pakistan: Right wing, religious-minded citizens and politicians praise it for bringing peace to Swat, while liberal Pakistanis see it as an unmistakable watershed in the country's battle against Islamic extremism, giving Al Qaeda and the Taliban a new safe haven. Swat is vital for the militants because it is well out of range of US drones, which successfully attack their leaders in FATA. Pakistan has objected to the US use of drones to bomb its territory and it will be politically unacceptable if the US extends drone attacks in Swat, several hundred miles from the Afghan border.

The Taliban are unlikely to stop with Swat. From FATA, the Taliban have already expanded their influence into the settled areas of North West Frontier Province and virtually laid siege to the capital Peshawar.

To add to the US and NATO woes three rival Pakistani Taliban leaders, who have fought the Pakistan army on and off since it deployed into FATA in 2004, have formed a new alliance called the Shura-e-Ittehad ul Mujaheddin or Council of United Holy Warriors. Under the influence of Mullah Mohammed Omar, the Afghan Taliban leader who also has a sanctuary in Pakistan, the new council aims to broker ceasefires with the Pakistan army so that both the Pakistani and Afghan Taliban can concentrate their firepower on the 17,000 new US troops being sent to Afghanistan in spring by the Obama administration.

The US military is trying to convince the army to retrain some of its regular forces in modern counter insurgency tactics. Last year after months of dialogue the army allowed the US to retrain and re-equip its paramilitary Frontier Corps, but not regular forces because it considers India a larger threat still expecting a conventional war.

Meanwhile extremist attacks like the one in Lahore only further depress the economy which faces increasing joblessness, inflation and capital flight. Last year Pakistan received a two year US$7.6 billion IMF loan, but any hope for bilateral aid from Europe and other donors has not materialized so far. 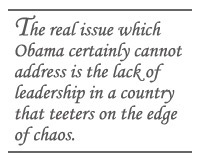 The Obama administration has promised Pakistan US$1.5 billion a year for the next five years, but it will take many months before the US Congress will make such money available, while conditions Congress will likely impose - such as decisively combating extremism - Pakistan may be unwilling or unable to fulfill.

The crisis in Pakistan leaves the US with few policy options. Large injections of cash are desperately needed to give the government the time to reestablish the writ of the state and revive the moribund economy. Yet the real issue which Obama certainly cannot address is the lack of leadership in a country that teeters on the edge of chaos.

Ahmed Rashid is a Pakistani journalist and author, most recently of “Descent into Chaos: The US and the Disaster in Pakistan, Afghanistan and Central Asia.”