The Day A Nuclear Conflict Was Averted

In a book to be published this week, former US Deputy Secretary of State Strobe Talbott tells the story of President Bill Clinton’s personal diplomacy in averting a possible nuclear war in South Asia. The conflict began in May 1999, when Pakistani commandos infiltrated the Indian part of Kashmir in the Kargil region. By the end of June, a furious Indian response with air and artillery assaults threatened to overwhelm Pakistan. Intelligence reports suggested that a cornered Pakistan might turn to the ultimate: nuclear weapons, which both India and Pakistan had tested in 1998. On July 4, 1999, while the US celebrated its Independence Day, an alarmed Clinton and his national security aides went to an unannounced meeting with Pakistan’s Prime Minister Nawaz Sharif – a meeting that US national security adviser Sandy Berger said could be “the single most important meeting with a foreign leader of his entire presidency.” The following story about that momentous day is adapted from Talbott's “Engaging India: Diplomacy, Democracy and the Bomb” (Brookings Institution Press). – YaleGlobal

The Day A Nuclear Conflict Was Averted 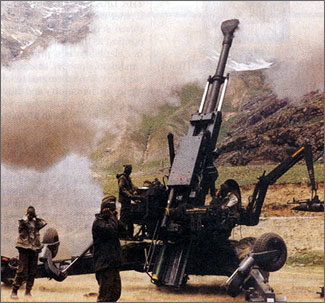 On the brink of a catastrophe: Indian artillery pound Pakistani infiltrators in the Kargil region of Kashmir. Pakistan was reported to be readying its nuclear weapons until President Clinton intervened

WASHINGTON: During the first week in June [1999], just as Milosevic was acceding to NATO’s demands over Kosovo, Clinton turned his own attention to India and Pakistan.

In letters to Nawaz Sharif and Vajpayee, the president went beyond the studied neutrality that both prime ministers were expecting—in Pakistan’s case with hope, and in India’s with trepidation. Clinton made Pakistan’s withdrawal a precondition for a settlement and the price it must pay for the U.S. diplomatic involvement it had long sought. Clinton followed up with phone calls to the two leaders in mid-June emphasizing this point.

The United States condemned Pakistan’s “infiltration of armed intruders” and went public with information that most of the seven hundred men who had crossed the Line of Control were attached to the Pakistani Army’s 10th Corps.

In late June Clinton called Nawaz Sharif to stress that the United States saw Pakistan as the aggressor and to reject the fiction that the fighters were separatist guerrillas. The administration let it be known that if Sharif did not order a pullback, we would hold up a $100 million International Monetary Fund loan that Pakistan sorely needed. Sharif went to Beijing, hoping for comfort from Pakistan’s staunchest friend, but got none.

Pakistan was almost universally seen to have precipitated the crisis, ruining the promising peace process that had begun in Lahore and inviting an Indian counteroffensive.

On Friday, July 2, Sharif phoned Clinton and pleaded for his personal intervention in South Asia. Clinton replied that he would consider it only if it was understood up-front that Pakistani withdrawal would have to be immediate and unconditional.

The next day Sharif called Clinton to say that he was packing his bags and getting ready to fly immediately to Washington—never mind that he had not been invited. ..He warned Sharif not to come unless he was prepared to announce unconditional withdrawal; otherwise, his trip would make a bad situation worse. The Pakistani leader did not accept Clinton’s condition for the meeting—he just said he was on his way.

“This guy’s coming literally on a wing and a prayer,” said the president.” That’s right,” said Bruce Riedel [NSC aide], “and he’s praying that we don’t make him do the one thing he’s got to do to end this thing.”

It was not hard to anticipate what Sharif would ask for. His opening proposal would be a cease-fire to be followed by negotiations under American auspices. His fallback would make Pakistani withdrawal conditional on Indian agreement to direct negotiations sponsored and probably mediated by the United States. Either way, he would be able to claim that the incursion had forced India, under American pressure, to accept Pakistani terms.

After several long meetings in Sandy Berger’s office, we decided to recommend that Clinton confront Sharif with a stark choice that included neither of his preferred options. We would put before him two press statements and let Sharif decide which would be released at the end of the Blair House talks. The first would hail him as a peacemaker for retreating—or, as we would put it euphemistically, “restoring and respecting the sanctity of the Line of Control.” The second would blame him for starting the crisis and for the escalation sure to follow his failed mission to Washington.

On the eve of Sharif’s arrival, we learned that Pakistan might be preparing its nuclear forces for deployment. There was, among those of us preparing for the meeting, a sense of vast and nearly unprecedented peril. When Clinton assembled his advisers in the Oval Office for a last minute huddle, Sandy told him that overnight we had gotten more disturbing reports of steps Pakistan was taking with its nuclear arsenal. Clinton said he would like to use this information “to scare the hell out of Sharif.”

Sandy told the president that he was heading into what would probably be the single most important meeting with a foreign leader of his entire presidency. It would also be one of the most delicate. The overriding objective was to induce Pakistani withdrawal. But another, probably incompatible, goal was to increase the chances of Sharif’s political survival. “If he arrives as a prime minister but stays as an exile,” said Sandy, “he’s not going to be able to make stick whatever deal you get out of him.” We had to find a way to provide Sharif just enough cover to go home and give the necessary orders to Musharraf and the military.

The conversation had already convinced Clinton of what he feared: the world was closer even than during the Cuban missile crisis to a nuclear war. Unlike Kennedy and Khrushchev in 1962, Vajpayee and Sharif did not realize how close they were to the brink, so there was an even greater risk that they would blindly stumble across it.

Adding to the danger was evidence that Sharif neither knew everything his military high command was doing nor had complete control over it. When Clinton asked him if he understood how far along his military was in preparing nuclear-armed missiles for possible use in a war against India, Sharif acted as though he was genuinely surprised. He could believe that the Indians were taking such steps, he said, but he neither acknowledged nor seemed aware of anything like that on his own side.

Clinton decided to invoke the Cuban missile crisis, noting that it had been a formative experience for him (he was sixteen at the time). Now India and Pakistan were similarly on the edge of a precipice. If even one bomb were used…Sharif finished the sentence: “. . . it would be a catastrophe.”

[Clinton] returned to the offensive. He could see they were getting nowhere. Fearing that might be the result, he had a statement ready to release to the press in time for the evening news shows that would lay all the blame for the crisis on Pakistan. Sharif went ashen.

Clinton bore down harder. Having listened to Sharif’s complaints against the United States, he had a list of his own, and it started with terrorism. Pakistan was the principal sponsor of the Taliban, which in turn allowed Osama bin Laden to run his worldwide network out of Afghanistan. Clinton had asked Sharif repeatedly to cooperate in bringing Osama to justice. Sharif had promised to do so but failed to deliver. The statement the United States would make to the press would mention Pakistan’s role in supporting terrorism in Afghanistan—and, through its backing of Kashmiri militants, in India as well. Was that what Sharif wanted?

Clinton had worked himself back into real anger—his face flushed, eyes narrowed, lips pursed, cheek muscles pulsing, fists clenched. He said it was crazy enough for Sharif to have let his military violate the Line of Control, start a border war with India, and now prepare nuclear forces for action. On top of that, he had put Clinton in the middle of the mess and set him up for a diplomatic failure. Sharif seemed beaten, physically and emotionally. He denied he had given any orders with regard to nuclear weaponry and said he was worried for his life.

When the two leaders had been at it for an hour and a half, Clinton suggested a break so that both could consult with their teams. The president and Bruce briefed Sandy, Rick, and me on what had happened. Now that he had made maximum use of the “bad statement” we had prepared in advance, Clinton said, it was time to deploy the good one. ..Clinton took a cat nap on a sofa in a small study off the main entryway while Bruce, Sandy, Rick, and I cobbled together a new version of the “good statement,” incorporating some of the Pakistani language from the paper that Sharif had claimed was in play between him and Vajpayee. But the key sentence in the new document was ours, not his, and it would nail the one thing we had to get out of the talks: “The prime minister has agreed to take concrete and immediate steps for the restoration of the Line of Control.” The paper called for a cease-fire but only after the Pakistanis were back on their side of the line. It reaffirmed Clinton’s longstanding plan to visit South Asia. The meeting came quickly to a happy and friendly end, at least on Clinton’s part.

Indian govt should have insisted that the Americans ask Nawaz Shareif to withdraw the Pakistani forces to withdraw from POK too. It would have been an apt reply to the arrogance shown by a military code to a democratic country. Also it would have put an end to any future attacks by the Pakistan military.