One tends to tar the Islamic militants with the same brush of terrorism, and the internet is seen as the outlet for their propaganda and grisly videos. However, conflicting perspectives of Al Qaeda and other terrorist factions found on the web could be a valuable tool for understanding their motivations and strategies, thus enabling governments to develop effective counter-strategies and prevent an organized attack. Gabriel Weimann, an expert on terrorists' use of the internet, reports on his eight-year study of exchanges via the web and how terrorist-identified groups debate suicide missions, strategies, as well as attacks on other Muslims or unarmed non-Muslims. He says analysis of such internet debates and discussions can provide new tools to combat terrorism. – YaleGlobal 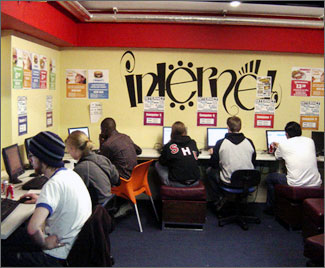 WASHINGTON: Terrorism and the internet conjure up images of online beheadings and dire warnings of attacks by Al Qaeda. Use of the internet to recruit terrorists or coordinate attacks is also well known. Less understood is how the internet has emerged as a battleground for ideas among terrorists and Islamic militants. The open, often vicious debate on the web dispels the common view of all militants being of the same feather and offers clues to the motivations and fears of disparate groups tarred by the same brush of terrorism.

Members of the terrorist community use the internet to present disagreement within their network, with examples found in online discourse of Al Qaeda supporters and mentors. For example, a lingering inner debate focused on Al Qaeda's attacks in Saudi Arabia during 2001-2003. Al Qaeda's online magazine, “Sawt al-Jihad,” or “Voice of Jihad,” devoted an issue to this debate in January 2004. One anonymous author seeks to justify the jihad in Saudi Arabia:

"My Muslim Mujahid brother, can you not see Muslims killed in Afghanistan, and then in Iraq...? Can you not see the Muslims in this worst condition of shame, humiliation, pain, harm, and injury? Can you not see that the headquarters of the war was from the [Arabian] Peninsula and that the center of all kinds of logistical support was this land, which the Prophet, may peace be upon him, commanded be purified from the polytheist?"

Terrorists also use the internet to attack, sometimes ferociously, other groups. The Chechen rebels, for example, criticized Hamas for eagerness to meet with Russian leaders after their victory in the 2006 Palestinian election. On May 30, 2004, Hamas published a press release on its official website, discussing the Khobar attack in Saudi Arabia, where 22 people, most foreigners, were killed by an Al Qaeda–related group during a 25-hour hostage ordeal:

"While we reject this kind of attacks, we wish to emphasize that they harm the security and peace of our countries, and the national and Islamic interests. Therefore, we call those responsible for these attacks to stop them, and preserve the interests and security of their country and nation, especially while our nation is facing external threats and challenges."

With the internet, terrorists also launch personal campaigns against other terrorists. Jihadi websites, as well as the Arab media, often criticized Abu Musab al-Zarqawi, “the Emir of Al-Qaeda in Iraq” until his death in June 2006. The first criticism came from an influential cleric of the Jihadi-Salafi movement: Abu Muhammad al-Maqdesi, the Jordanian-Palestinian Islamist scholar and spiritual guide of al-Tawhid wal-Jihad in Jordan and Iraq. In an online interview, he criticized Islamist insurgents in Iraq for the mass killing of Muslims. On 5 July 2005, he repeated his criticism that “the indiscriminate attacks might distort the true Jihad,” generating a wave of online responses by Jihadi scholars, clerics and youth.

Later, a religious dispute emerged between al-Zarqawi and his spiritual mentor Abu Muhammad al-Maqdisi, primarily on Islamist websites and from there spreading to the Arab media. The debate focused on the legitimacy of attacking Muslims and noncombatant non-Muslims: al-Maqdisi criticized “the extensive use of suicide operations” that killed many Muslims, and stated that suicide operations were not a traditional Islamic means of warfare, but rather an exceptional means, for use only in specific circumstances. Posting an online audiotape in May 2005, al-Zarqawi responded, trying to justify the victimization of Muslim civilians within the context of Jihad and suggesting that Allah had ordered the killing of infidels by all means, even if this resulted in the death of infidel women, children or Muslims. In July 2005, al-Zarqawi published another statement, discarding al-Maqdisi's accusations, rejecting his teachings and praising the advice of other trusted ulama. He argued that al-Maqdisi had no right to criticize the fighters in Iraq since he had not taken part in the Iraq Jihad.

Specific operations also become the focus of heated online debates. For example, Abu Basir al-Tartusi, a Syrian Jihadi scholar residing in London, leveled harsh criticism against the 7 July 2005 London bombings. On 9 July 2005, he published a fatwa on his website that protested the killing of British civilians as a “disgraceful and shameful act, with no manhood, bravery, or morality. We cannot approve it nor accept it, and it is denied islamically and politically.” Abu Basir’s fatwa drew angry responses in Jihadi forums, which led him to publish another online declaration, “The Love of Revenge or the Legal Ruling,” on 11 July 2005. This in turn produced a long, unsigned online response, “The Base of Legitimacy for the London Bombings and Response to the Disgraceful Statement by Abu Basir al-Tartusi,” which recalled some Islamist justifications for the September 11 attacks.

The anonymous author of the counter-fatwa claims that Muslims need no fatwa each time an attack takes place on enemy soil since “This is an integral part of the Muslim Sunnah,” or the Prophet’s traditions. He urges that Muslims show joy for every tragedy suffered by oppressors, resisting any sympathy. Moreover, he claims that any condemnations of the London bombings contradict Islam: “I warn my believing brothers to stop criticizing their brothers, the Mujahidin, especially these days.”

Often the virtual battle is among various terrorist websites, representing different groups affiliated with the same movement. The Al-Tajdeed site (www.tajdeed.org.uk), operated by the Saudi Islamist opposition in London, launched such a struggle against www.alhesbah.org, a leading Islamist site that often posts messages from Al Qaeda. Al-Tajdeed accused Al-Hesbah of serving Arab and Western intelligence agencies, as well as exposing the founders of the famous Al-Ansar website (www.al-ansar.org), including the operator known as "Irhabi 007" and other members of the Global Islamic Media Front. On March 5, 2006, Al-Tajdeed published an article signed by "Omar bin Hanif," titled "A Series of Exposures of Spies - [Who Is] the Traitor who Sold Irhabi 007?"

After Al-Hesbah went offline, Al-Tajdeed attempted to attract Jihadists who had used Al-Hesbah by promoting alternative websites such as Al-Akhbar and Al-Alamiyya. However, on April 4, 2006, Al Qaeda posted a communiqué on several forums rejecting the accusations against Al-Hesbah for the arrest of Al Qaeda members and Irhabi 007: “we stress that these allegations are false. Everything we know about our brothers in Al-Hesbah is good – and even if we assume, for the sake of argument, that [the website] had been infiltrated, [we assure you that] … the fall of the brothers had nothing to do with the Internet.” Al-Tajeed responded immediately, arguing that the communiqué was fake, an attempt by Arab-Zionist intelligence apparatuses to maintain “the Al-Hesbah espionage site.” The site reappeared April 14, 2006, with a statement blaming the attacks for the website’s month-long absence and noting that precautions had since been taken.

Terrorists rely on the internet as a channel of communication, not always harmonious. The analysis of the online controversies and disputes reveals the terrorists’ mindset, opening a window to a world we know little about. These sites can serve those who fight terrorism. By learning the inner cleavages, security officials can find practical ways to support the voices that oppose terror, to broaden gaps within these dangerous communities and to channel the discourse to non-violent forms of action.

Gabriel Weimann, is professor of communication at Haifa University, Israel, and a former senior fellow at the US Institute of Peace, Washington, DC. He is currently a visiting professor at the School of International Service, American University, Washington, DC. An extended version of this article on terrorist debates will be published in an upcoming issue of “Studies in Conflict & Terrorism.” His e-mail is Weimann@soc.haifa.ac.il.
Click here to read an excerpt from his book, “Terror on the Internet: The New Arena, the New Challenges,” published in April 2006.

© 2006 The Yale Center for the Study of Globalization