Democracy in Burma: Does Anybody Really Care?

Upon its 1967 founding, the Association of Southeast Asian Nations (ASEAN) stated its collective goals, wherein members, "through joint efforts and sacrifices, secure for their peoples and for posterity the blessings of peace, freedom, and prosperity." Unfortunately, in Burma – one of the 10 member states – the ruling junta has provided none of the aforementioned "blessings" for its people, and the Asian organization has done little to change the situation. The Burmese military dictatorship has been a source of controversy within the bloc, raising questions about ASEAN's legitimacy in regional governance. As Amitav Acharya writes, the decision for Burma to cede its 2006 ASEAN chairmanship averted a major political crisis – temporarily. "But without more focused action by ASEAN and the international community," Acharya warns, "the move will be little more than ASEAN's traditional practice of sweeping problems under the carpet." Western nations, for their part, have had little action to back their criticisms of Burma's corrupt regime. Acharya suggests a coordinated international and regional diplomatic effort to urge the junta to reform. He writes, "If the US could engage in six-party negotiations…to deal with the North Korea problem, why should it not encourage a similar move…to deal with the Burma issue?" – YaleGlobal

Democracy in Burma: Does Anybody Really Care?

ASEAN wants to push the issue under the carpet, while the West is content with grandstanding
Amitav Acharya
Thursday, September 1, 2005 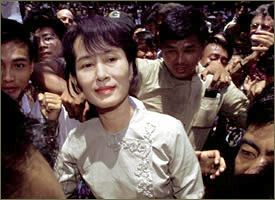 SINGAPORE: A July 2005 agreement among the members of the Association of Southeast Asian Nations (ASEAN) that Burma would relinquish its turn at the chairmanship has averted a major diplomatic crisis for the organization. Western nations, including the United States and the European Union, who attend the annual ASEAN meetings as "dialogue partners," had threatened to boycott the 2006 meeting if Burma was in the chair.

Founded in 1967, ASEAN now includes 10 countries of Southeast Asia. Under its rotational leadership, Burma, which joined the group in 1997, was due to assume the chairmanship of its Standing Committee in 2006.

The Western dialogue partners of ASEAN are protesting against continued political repression and human rights abuses by the Burmese regime, which has ruled the country since 1962. The regime has refused to accept the result of the 1990 national election, which was won by the opposition National League for Democracy (NLD). The party leader, Aung San Suu Kyi, has since spent most of her time under detention.

By giving up its claim to lead ASEAN in 2006, the junta managed to take the heat off the question of domestic reform. And ASEAN avoided a Western boycott of its 2006 meeting. But without more focused action by ASEAN and the international community to move Burma towards democracy, the move will be little more than ASEAN's traditional practice of sweeping problems under the carpet.

The discussion in Laos was not about how to improve the political situation in the country. The issue was Burma's leadership, rather than membership in ASEAN. ASEAN has not made Burma's continued membership of the association subject to political reform.

ASEAN has been reluctant to push Burma towards political reform out of deference to its doctrine of non-interference. The Burmese junta has started drafting a new constitution, due to be completed in 2007, which it says would lead to political liberalization. Presumably, this would make Burma eligible to assume the leadership in ASEAN.

ASEAN members agree and hope that this will be the case. But its Western partners dismiss the constitution-drafting process. Suu Kyi and her party have boycotted the National Convention drafting the constitution, whose delegates were hand-picked and tightly controlled by the junta. The Bush administration in May 2004 stated that because "Rangoon's constitutional convention has not allowed for substantive dialogue and the full participation of all political groups, including the NLD, it lacks legitimacy." If approved by a popular majority in the electorate in a free and fair referendum – which is by no means guaranteed – the constitution would still accord the military a privileged position in the political system, including sole claim to the presidency.

ASEAN's role in Burma has been very different from its role in the Cambodia conflict during the 1980s, when it led efforts to find a peaceful settlement to the dispute, which resulted in the Paris Peace Agreement in 1991. That conflict was originally a civil war, although it had been internationalized by Vietnamese intervention and occupation of Cambodia. There has been no outside intervention in Burma, which is one justification for ASEAN's hands-off policy. But Burma has proven to be a major embarrassment for ASEAN.

ASEAN's diplomatic options in dealing with Burma are limited by intra-mural differences within the grouping over how to deal with the junta. Some members – Indonesia, Malaysia, Philippines, and Singapore – are increasingly concerned about the group's relationship with Western nations, if not its international public reputation per se. Thus, these ASEAN countries want to see the association play a role in nudging the junta to reform. Others, like Vietnam, stick to the principle of non-interference, and are worried about setting a precedent of allowing regionalist pressure for domestic political reform – a precedent that would likely come back to haunt them.

ASEAN's capacity for inducing political reform in Burma is also constrained by the fact that the junta has secured backing from both China and India, its two most powerful neighbors, playing them against one other. Hence, the junta can ignore any demand for political change that ASEAN may bring to bear on it.

China and India are critical to any intervention by the international community in Burma. But is the West really interested in advancing political change in Burma? There is no serious diplomatic effort ongoing today – of the kind one finds in Sri Lanka or Aceh – that might help bring about political reconciliation in Burma. The Bush administration snubbed ASEAN by canceling Secretary of State Condoleezza Rice's attendance at the Vientiane meeting. But this posturing was almost entirely cost-free, thanks to good bilateral relations with key Asian nations, as indicated by a separate Rice stopover in Bangkok before the Vientiane meeting. Diplomatic snubs and economic sanctions are no substitute for a policy of seeking a solution to Burma's political woes.

Burma's strategic location or economic potential may be apparent to India and China, but not to the US. Burma is not regarded by the Bush administration as a terrorist haven, although it claims to side with the US on the war on terror, supposedly against extremist elements among its Rohingya muslim minority. When asked by the author as to why the US is not actively seeking a role in the Burma problem, a senior official in the first Bush administration replied that because there is no significant domestic interest or constituency in the United States pushing for such a role. The administration's democracy-promotion agenda does not extend to Burma, despite the fact that Secretary Rice named Burma as one of six "outposts of tyranny" during her Senate confirmation hearing in January.

Yet, a diplomatic effort backed by the US and involving Burma's giant Asian neighbors would be necessary and timely. Denying Burma the chairmanship of ASEAN is good posturing, but it does not advance the cause of democratic transformation in the country. If the US could engage in six-party negotiations involving China, Japan, Russia, and South Korea to deal with the North Korea problem, why should it not encourage a similar move involving China, India, and ASEAN to deal with the Burma issue?

The international community needs to prove that while taking a moral high ground on Burma's crisis; it must also offer concrete ideas and approaches to advance the democratization and national reconciliation process beyond the current policy of sanctions and boycott. A necessary step in that direction would be a new diplomatic initiative to persuade the Rangoon regime to broaden the constitution-drafting process – with the participation of freed opposition leaders and a firm time-table for internationally-supervised elections. Such an initiative could be spearheaded jointly by ASEAN, China and India, with the backing of the US and the EU and other members of the international community.

Ultimately, ASEAN must come out of its non-interference closet and address the issue head-on. Otherwise, its hands-off approach will continue to cloud its legitimacy and credibility as a regional organization with a mandate for seeking "regional solutions to regional problems."

Amitav Acharya is Deputy Director and Head of Research at the Institute of Defence and Strategic Studies, Nanyang Technological University.