As economic crisis sweeps the globe, citizens expect their political leaders to create jobs, but it leads to other problems in the process. For example, in the US, President Barack Obama has vowed to end “tax breaks” for companies that ship jobs overseas, causing consternation among some in the Indian IT industry. Indian IT provides services to financial, banking and insurance firms around the globe and is already hit hard by the financial fallout. But IT analysts are less perturbed, knowing that offshoring can save firms money and jobs during hard times while encouraging fast delivery of new products and the flow of new talent. “The outsourcing business is so deep that it would be impossible to reverse the trend in a short period of time,” notes journalist and author Dinesh C. Sharma. For now, rhetoric over protecting jobs is still stronger than any actual job-protection programs. Market forces influence both products and people, and Sharma cautions that tinkering with tax breaks or legal restrictions can do little to stop the flows associated with supply and demand. – YaleGlobal

A global recession is the time for outsourcing some tasks and reducing costs as well as anxiety
Dinesh C. Sharma
Monday, March 9, 2009 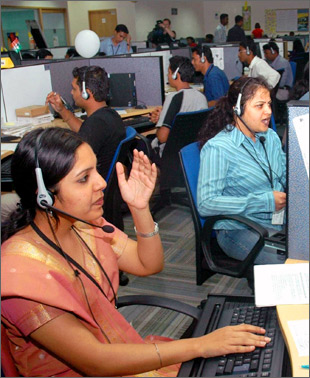 NEW DELHI: Ever since taking over as US president, Barack Obama has caused some nervous moments for India’s gigantic outsourcing industry, which depends on American corporations for the bulk of its business. First, it was the issue of curtailing the number of H1B visas that allow foreign workers to take up employment with US companies. Then came the announcement about “ending tax breaks for corporations that ship our jobs overseas” in his February 24 speech to Congress.

So, is India’s outsourcing industry in trouble? A closer look at India’s information technology sector where US involvement is the deepest shows it to be a storm over an Indian teacup.

The latest pronouncement of Obama is continuation of the political rhetoric on this subject that he indulged in throughout the presidential campaign last year, following the footsteps of Democratic candidate John Kerry in the 2004 campaign. So, in effect, Obama is trying to send a message that he’s ready to deliver on his election promise relating to offshoring. For an economy facing its worst crisis in recent history, any semblance of protecting jobs would offer some much needed relief. 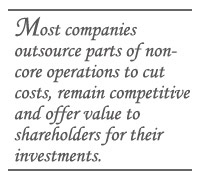 However, if one examines closely what Obama is projecting as a major stride to tame the tide of offshoring, it would appear that it’s not even half a step. American firms that transfer jobs overseas or outsource work to distant locations do not get any tax break as such. They are only entitled to a concession in the US tax code under which they are allowed to defer income tax payments on offshore profits until they are repatriated back home. Obama wants to eliminate this and tries to present it as a tax break, making it palatable to beleaguered Americans.

India reacts to this along expected lines: Some in the business and government circles call it a protectionist measure, while others feel it may not have any significant impact. In any case, the Indian outsourcing industry has been under pressure since the downturn began in US financial, banking and insurance markets last year as this segment constitutes a large chunk of its business. The industry also suffered an image problem in wake of large-scale fraud unraveled in one of its star firms, Satyam, a few months ago. These two factors are bound to affect bottom lines of major Indian outsourcing firms in coming quarters.

But all this does not change the fundamentals of outsourcing business. Most companies outsource parts of their non-core operations to cut costs, remain competitive and offer good value to shareholders for their investments. All this becomes far more important when there is recession. Simple economics suggests that one should further cut costs when the going is bad. If American companies wish to remain afloat in these bad times, perhaps it is prudent to outsource more rather than do the reverse and add to costs. It is likely that corporations will outsource more and more of their business processes to India or elsewhere as the recession deepens. 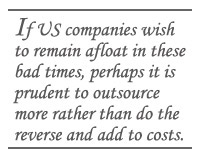 Yet another reason why companies outsource is to bring new products faster to markets. This happens in two ways. By outsourcing routine functions of their businesses to offshore locations, they have the room to deploy their workforce in core business areas such as getting new customers and developing new products. In some cases, they may outsource segments of the product development process also. Development of chips is a classic case of this phenomenon. In the past few years, the entire design chain of a semiconductor chip has been unbundled. This allows American chip makers and consumer electronics companies to farm out segments of chip design, fabrication and testing to different locations in the world, in order to slash development lead time and achieve faster time to market.

There are other reasons, too, why offshoring makes economic sense to America. For every dollar spent on outsourcing, the US economy receives $1.12 to $1.14 in return, according to estimates made by McKinsey a few years ago. Outsourcing results in far more indirect benefits than direct cost savings to corporations. As head of an Indian information technology firms had said famously that “we use American hardware, software and networking devices; young people who work in our companies buy all American labels – shoes, jeans, watches – see American movies, eat at McDonald, Pizza Hut and Papa John, drink Pepsi and Coke. All this leads to growth of American corporations and that country’s economy.”

The American public is not aware of this magnitude of the outsourcing business. The brouhaha over job loss is mainly due to highly visible operations such as overseas call centers, where US customers directly interface with foreign agents. And this is only a small part of the offshoring pie. 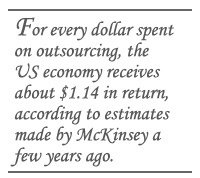 The outsourcing business is so deep that it would be impossible to reverse the trend in a short period of time. It operates at different levels and in complex ways. Even a seemingly simple job of application software development can happen in different ways – fully developed in India or partly onsite and partly offsite, or handled by subsidiaries of Indian companies in US or in a third country where Indian companies have offshore operations. Alternatively, US corporations may get the job done at their own captive units in India, China or the Philippines. It would be difficult to make out which job is getting shipped where and to whom. Some people like to call this global sourcing.

Similarly, the business of outsourced research and development has also grown tremendously in recent years. According to some estimates, nearly 200 Fortune-500 companies have set up R & D centers in India. These companies belong to sectors ranging from chip makers to aviation companies. Firms like General Electric have invested several hundred million dollars in large facilities that employ thousands of research workers. Such units produce substantial numbers of patents and commercial products. The intellectual property generated by these units in India belongs to parent American corporations and so they earn all the royalty earned through commercialization and related products ultimately sold in mass consumption markets like India. 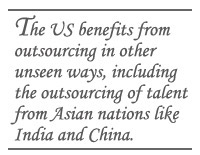 The US benefits from outsourcing in other unseen ways, including the outsourcing of talent from Asian nations like India and China. A constant flow of talent and skilled manpower comes to the US in the form of students arriving at institutions like the Massachusetts Institute of Technology as well as trained professionals such as doctors and nurses. Most students who study tend to stay and contribute to the US economy. Innovation hubs like Route 128 and the Silicon Valley are populated by companies floated by such outsourced talent. These companies hire local people and generate of billions of dollars in revenue every year. So, in effect, the American economy gains at the cost of taxpayers’ money spent on training such workers abroad.

In a globalized world, the flow of people, services and jobs will follow a natural trajectory determined by market forces. Tax breaks, trade barriers, legal restrictions and political posturing play only a limited role in affecting this trend. Political pronouncements notwithstanding, the case would not be different with US companies outsourcing work to India.

Dinesh C. Sharma is science editor of Mail Today and the author of “The Long Revolution: The Birth and Growth of India’s IT Industry,” published by HarperCollins Publishers, India. Click here to read an excerpt from his book.