Despite TV Appearances, Al Qaeda Is Not Winning the War

In his latest videotape, Ayman al-Zawahiri, deputy to Osama bin Laden, postures that Al Qaeda is at full force. While many Muslims find Al Qaeda’s grievances against the US foreign policy compelling, few endorse terrorism or line up for martyrdom. Instead, Osama bin Laden’s warriors are increasingly at odds with the “Umma,” or the international Muslim community they seek to represent, as well as with one another. Middle East scholar Fawaz Gerges contends that the Iraq war has benefited Al Qaeda by creating a distraction from the divisive civil war raging within the jihadist movement between ultra-militant and non-violent factions – as well as bin Laden’s serious miscalculations. Gerges suggests that the real fight against Al Qaeda for the US is not on the battlefield. The US could win support from the larger Muslim community by removing the troops from Iraq, facilitating peace between Israel and Palestine, and investing with socio-political and economic capital in the rule of law and democracy in the Muslim world. – YaleGlobal

Despite TV Appearances, Al Qaeda Is Not Winning the War

Al Qaeda fails to win hearts and minds of Muslims, but the US should change its strategy
Fawaz A. Gerges
Tuesday, January 31, 2006 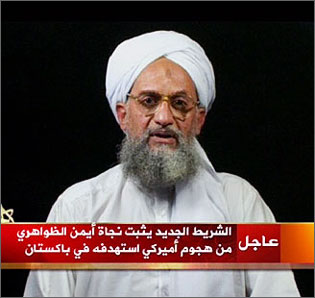 TV taunt: Ayaman al-Zawahiri popped up on television again to prove he is alive but his movement is not winning converts. (Photo: Aljazeera.Net)

NEW YORK: Ayman al-Zawahiri, Osama bin Laden’s deputy, emerged this week in a new videotape, taunting US President Bush for failing to kill him with a January 13th missile attack in Pakistan. The tape, proof that al-Zawahri lives, promises defeat for the US and targets Bush: “Butcher of Washington, you are not only defeated and a liar, but also a failure. You are a curse on your nation and you have brought and will bring them only catastrophes and tragedies,” al Zawahiri thundered.

In an earlier tape, Osama bin Laden claimed that Al Qaeda is winning its global war and that his warriors “are increasing in number and strength” to bring about America’s “ultimate failure.” The tape threatened to penetrate US defenses and carry out another spectacular attack.

Separating Al Qaeda’s rhetoric from reality is not easy. Bin Laden and his jihadist cohorts are waging an ideological war for Muslim hearts and minds, one they consider as vital as their military campaign. Last October the US government intercepted a letter from al-Zawahiri to Abu Musab al-Zarqawi, leader of Al Qaeda in Iraq, reprimanding him for videotaped and widely broadcast images of hostage beheadings, and bombings that have slaughtered ordinary Shia Muslims, sometimes within mosques. Muslim public opinion abhors these “terror” methods, wrote al-Zawahiri, the ideologue and brains of Al Qaeda, and “will never find them palatable.” He continued, “We are in a race for the hearts and minds of our Umma,” referring to the worldwide Muslim community.

Al-Zawahiri and bin Laden seek to convince Muslims, particularly militant Islamists, that Al Qaeda is winning its war against America. Such conviction, they reason, would incite their sympathizers to attack US interests around the world. “War in Iraq is raging with no let-up,” bin Laden declared on his latest tape, “and operations in Afghanistan are escalating in our favor.”

The bin Laden tape addresses the American people, both threatening fresh attacks and offering hudna, or long-term truce, if America withdraws from Iraq and Afghanistan. He knows that Americans, unconvinced by the arguments behind his attacks against the US, won’t buy his truce offer. In reality, the tape was for Muslim ears: bin Laden intends to establish himself in the eyes of his putative constituency as a legitimate leader, concerned with wartime diplomacy - that like George W. Bush, he is a wartime leader. The tape also answers Muslim critics who faulted him for violating Islam’s fundamental rule of war: Americans were not thoroughly warned before the September 11 attacks - for that matter, neither were Africans, Iraqis, Indonesians, Jordanians, and others.

These subtexts are the tape’s real messages. Osama bin Laden is a fugitive; he must assure his supporters, anxious about his fate, that all is well. In mid-January, a US air strike in Pakistan that targeted al-Zawahiri reportedly killed four principal Al Qaeda figures. The Al Qaeda cohort is being closely tracked, and Al Qaeda cannot win if its top leaders spend most of their time in hiding, trying to survive. If nothing else, the bin Laden and al-Zawahiri tapes say “we are winning because we are alive.”

Al Qaeda’s grand failure is its inability to win the war for Muslim hearts and minds. A major miscalculation of bin Laden and al-Zawahiri was believing that a US attack would mobilize Muslims against their pro-Western rulers and those rulers’ superpower patron. Al Qaeda expected a river of volunteers to flow into Afghanistan to fight the US. Only a trickle turned out. While public surveys show many Muslims sympathize with Al Qaeda’s foreign policy grievances against the US, they oppose its terrorism and are unwilling to kill or be killed on its behalf.

Al Qaeda has failed since September 11 to reinvigorate and unify a splintered, war-torn jihadist movement and restore its “credibility” in the eyes of the Umma. Many Islamists and former jihadists, even within bin Laden’s wing of the movement, saw September 11 as a calamity. A senior member of the Al Qaeda shura, or consultative council, Abu al-Walid al-Masri, publicly lambasted bin Laden’s “catastrophic leadership” and his underestimation of American willpower. Since September 11 more than a dozen books, memoirs and diaries by leading jihadists offered devastating critiques of what they called Al Qaeda’s colossal miscalculations and recklessness.

Since the late 1990s an intense struggle, an internal upheaval has torn the jihadist tribe apart. This civil war, which has hardly been noticed let alone critically examined, in the US, has deepened since September 11. The jihadist tribe is split between the ultra-militant wing, including Al Qaeda, and a non-violent faction that commands greater numbers and political weight. The war in Iraq has overshadowed this civil war - a godsend to Al Qaeda - diverting attention from its zero-sum game and lending it an air of

credibility. Bin Laden and al-Zawahiri have successfully tapped into the widespread Muslim opposition to the American-led occupation of Iraq. The war in Iraq proved a powerful recruiting tool for Al Qaeda, giving it time to regroup.

The Iraq war has merely postponed the inevitable shift of power toward activists who oppose violence in the service of politics. The indiscriminate violence of al-Zarqawi’s followers have turned Arab and Iraqi public opinion against global jihad. There are daily

reports of armed clashes between home-grown Iraqi fighters ­ the overwhelming majority of the insurgency ­ and the al-Zarqawi network. Sunni tribal leaders and clerics have reportedly promised to chase al-Zarqawi extremists out of their villages and towns. The widening rift between the two camps does not bode well for the survival of Al Qaeda in Iraq.

This promising development does not mean the US is winning in Iraq. Al Qaeda still benefits from America’s woes in the war-torn country.

Equally important, Al Qaeda no longer exists as a coherent, unified organization with centralized leadership and decision making; it is diffuse and decentralized with local affiliates taking matters into their own hands, as demonstrated by attacks in Iraq, Indonesia, Madrid, Saudi Arabia, Egypt, and London. Now bin Laden and al-Zawahiri focus primarily on providing spiritual inspiration and overall strategic direction to jihadist factions. Al Qaeda, while still dangerous, is a skeleton of its former strength. Bin Laden would have us believe that Al Qaeda is on the verge of striking inside the US with another 9/11. His claim flies in the face of Al Qaeda’s degraded military capabilities and the dwindling support for the global jihad in Muslim lands.

Notwithstanding the weakening of Al Qaeda, the struggle against this transnational network cannot be won on the battlefield. The most effective means to put the global jihad out of business is to complete its internal marginalization in the Muslim world. Muslims almost universally reject Al Qaeda’s global jihad. Yet the Bush administration only pays lip service to the war of ideas, and has not taken effective measures to win Muslim minds. US priorities should include extracting American troops from Iraq, earnestly promoting reconciliation and peace between Palestinians and Israelis, and investing socio-political and economic capital in the rule of law and democracy in Muslim lands.

Fawaz A. Gerges holds the Christian A. Johnson Chair in Middle East and International Affairs at Sarah Lawrence College. He is the author of “The Far Enemy: Why Jihad Went Global,” published by Cambridge University Press in 2005, and “Journey of the Jihadist: Inside Muslim Militancy,” to be published by Harcourt this year.