The meeting this week in Geneva may be the last chance to complete the Doha Development Round of talks launched by the World Trade Organization in 2001. While many observers anticipate that the round could be rescued, the stalemate highlights the structural weaknesses of a trade organization taking on a development agenda. The aim of the WTO is to lower trade barriers in the pursuit of expanding global trade, a goal overshadowed of late by developing nations banding together to make economic development the key issue. These countries, led by India and Brazil, account for less than 1 percent of worldwide trade, but represent a majority of the WTO members. Loath to accept painful cuts in farm subsidies that the developing countries demand, the EU and the US have demanded reciprocal openings in other areas. In this stalemate, the Doha Round’s success requires strong political leadership. The consequences of failure are clear: A World Bank study predicts massive gains from further trade liberalization, and failure, the author says, will result in unbalanced “free trade area” agreements, forcing weaker partners to accept “distasteful conditions as the price of agreement.” As with any negotiation, compromise and sacrifice are necessary for salvaging Doha – ensuring equal trade rules for all WTO members rather than a patchwork of favors. – YaleGlobal

WTO strives for one last chance at wrapping up the Doha Round trade talks
Bernard K. Gordon
Thursday, July 20, 2006 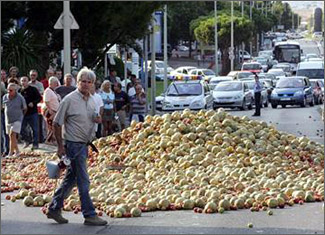 DURHAM, NH: As the G-8 Summit left St. Petersburg, the US sent its chief trade negotiator packing to Geneva for one final, final effort to save the World Trade Organization’s Doha Round. The betting – though with close odds and some decisions by key players in Europe and the developing world still in the balance – was that the round would be rescued. In a remarkable and brief speech, Pascal Lamy, WTO director-general, told the world’s political leaders that a Doha “failure would be a blow to the development prospects of the three quarters of WTO members whose economies are poorer or weaker than yours.”

That resonated with many, but a big question was whether it resonated among the developing nations. Their role in Doha Round talks nicely illustrates the meaning of “hoisted on his own petard.” In medieval times, a “petard” was a bomb intended to blast a hole in an opponent’s position, but too often blew its carrier to bits – thus “hoisted.” In November 2001, when the WTO made “development” the centerpiece of its new negotiating agenda – calling it the “Doha Development Round” – that was the bomb that now threatens to blow the WTO to bits.

The 2001 Doha meeting came just weeks after September 11 – when it was thought terrorism and poverty were closely related, and that “development” could cure both. The developing nations also insisted that prior trade rounds had ignored their particular needs, especially in agriculture. The truth on all counts is much less clear, but it has become politically incorrect to recall that “development” is not the WTO’s central goal. That goal is to lower trade barriers, thereby expanding global trade and improving global prosperity.

Yet the developing nations, because of their numbers and symbolism, have ended up in the catbird seat, where they no more belong than did Moscow at the G-8 summit. And until they loosen their lock-hold on WTO decision-making, everything else will likely stay frozen. Analysts widely recognize that an EU-US agricultural conflict, rooted in a French-EU commitment to farming, is at the core of the Doha Round stalemate, but issues pertaining to the developing nations provide an excuse to do nothing. Paris and Brussels say Europe can’t move until the developing nations lower their barriers to imported goods and services, and US Trade Representative Susan Schwab echoes the sentiment, charging that “The Brazils, the Chinas, the Indias of this world” cite developing-world solidarity to excuse their refusal to cut tariffs on products and services from the more advanced economies. 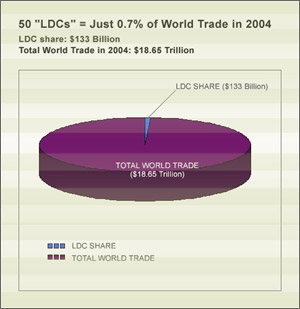 Compounding the problem, the stake of the developing nations in world trade is miniscule, despite their large numbers. The WTO lists 50 nations as “least developed countries,” and reports that in 2004 the total trade of all nations was almost $19 trillion dollars. But as the pie graph shows, the LDC share of that sum was less than 1 percent, or just $133 billion.

To add to the complexity, decision-making at the 150-member WTO is by consensus. There is no weighted voting and no two Houses, as in most parliamentary bodies. Even the UN is bicameral: Its General Assembly includes everybody, and its 15-member Security Council remains dominated by the original “Big 5.” But in the unicameral WTO, those with the smallest stake have the largest number and often the loudest voice – a fact reinforced by the roles of Brazil and India as principal spokespersons for the developing nations.

The two emerging powers used that voice and position to great effect, most notably at Cancun in 2003. That’s when world trade talks last broke down, and when former US Trade Representative Robert Zoellick said the reason was the split between the “can-do” and the “won’t do” nations. Today’s impasse is similar, and because both Brazil and India regularly speak for developing nations, it’s legitimate to ask how much weight they add to world trade totals. The answer, in the bar graph, is not much. Even when combined with the 50 LDCs, Brazil and India account for less than 3 percent of world trade. Trade leaders are clustered in North America, Northeast Asia, the EU and the Asia-Pacific region.

Those economies, with their major stake in global trade, have the main responsibility to continue its expansion. That means kick-starting Doha, which requires both political will and US leadership. President Bush underlined this before the G-8 summit when he said he’s “prepared to make a tough decision” to break the Doha logjam. Lamy made the same point in St. Petersburg when he said “the problem is not technical, but political.”

The need for political will revolves around three issues: One was America’s call for reciprocal farm subsidy cuts, beginning with a five-year 60 percent US cut. Australia’s foreign minister called it a “once-in-a-lifetime opportunity that ought to be grasped,” but the EU dismissed it as too little, with too many exceptions. Second is Europe’s offer to cut tariffs on farm imports by an average of 39 percent, but when EU Trade Commissioner Peter Mandelson suggested more, France’s trade minister quickly corrected him. And for the developing nations, the call has been for sharp tariff and quota cuts on most imports, but that produced cries that the very poor needed protection – along with their new sectors and old inefficient ones. As India’s trade minister put it, “We can’t negotiate subsistence and livelihood…we should not even be asked to do that” – comments echoed by the chief spokesman for the least developed nations.

Three realities confront the three areas of needed political will: the enormous spending on farm subsidies; the gains for everyone if Doha succeeds; and the consequences, especially for the developing nations, if it fails. On farm supports, the World Bank shows EU annual spending at $134 billion, Japan at $47 billion, and the US at “just” $43 billion. But Europe disputes the issue altogether, arguing that simply cutting farm tariffs, as the US demands, will do little for the world’s poorest. America’s riposte, backed by much evidence, is that Europe is, in fact, far less open to developing nation exports than the US. 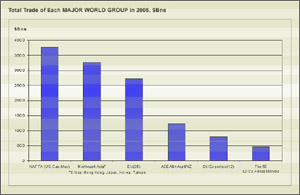 The second reality, on which there is wide agreement, is the likely gains from continued trade liberalization. The World Bank estimates “the global gains from radical trade liberalization at nearly $300 billion a year,” an estimate endorsed by Martin Wolf of the “Financial Times,” who adds that “the great majority of developing countries would gain from full liberalization.” There is likewise much agreement on the consequences of a Doha failure: an acceleration of regional and bilateral preferential agreements, AKA “free-trade areas.”

This FTA bandwagon was begun by the US, and the EU now makes similar moves, especially in Asia, where China and Japan are in a developing FTA competition. But it will prove a Faustian bargain for the developing nations, because they cannot negotiate effectively with the larger, richer, and thoroughly staffed global giants. Even such savvy economies as Australia and Singapore, in FTA dealings with the US, provide ample warning: They accepted distasteful conditions as the price of agreement. Also instructive are Korea’s FTA talks with the US: No less than 70 experienced American trade negotiators descended on Seoul; not surprisingly, those talks are now on hold. Rather than go down that road, those with power over Doha’s outcome must now decide whether to make the perfect the enemy of the good.

Bernard K. Gordon is professor emeritus of political science at the University of New Hampshire. His most recent book is “America’s Trade Follies: Turning Economic Leadership into Strategic Weakness,” published by Routledge in 2001.