Many Muslim nations, including Indonesia, Bangladesh and Malaysia, decline diplomatic relations with Israel, and the president of Iran has gone so far as to call for eradication of Israel. Yet refusing to meet with an opponent is not statesmanship. Last August, a visit of Indian Muslims to Israel was the first of its kind, meant to nurture a connection based on democracy. Muslims in India have a long history of democratic representation compared to Muslims elsewhere, and Israel is a democracy in the Middle East where Muslims take part in the process. A separation between religion and state politics is a tie that binds secular democracies. The trip serves as a reminder that the Palestinian-Israeli conflict has more to do with politics than religion. Problematic as democracy may be to institute, its benefits go a long way in building bridges among diverse groups and reducing frustration that fuels violence. – YaleGlobal 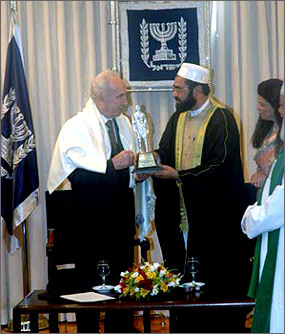 LONDON: A group of bearded religious leaders in flowing robes and skullcaps going through an airport is a common sight. But the Islamic group that recently left India for a trip abroad is unprecedented. Their destination was Israel, a country viewed by many Muslims as their mortal enemy.

The August trip, designed to foster understanding between the two peoples, highlighted the diversity in the Muslim community and offered the reminder that a majority of Muslims live outside the Arab world and benefit from democracy. More importantly, the trip debunked the link between religion and state in the Palestinian-Israeli conflict, suggesting that states with substantive democracies can overcome hostility over longstanding religious differences.

Since India is the only country in the world where Muslims have experienced a truly democratic life for more than half a century, this visit has wider significance for understanding democratic geopolitics in today’s fast-globalizing world. 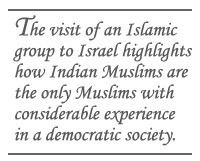 The visit has three important aspects: First, it advances a “democratic understanding” of Israel among Indian Muslims and the rest of the Islamic and wider world. Second, the unprecedented journey is a result of the deepening realization among Indian Muslims that they are the only Muslims with considerable experience in a truly pluralistic, free and democratic society. Third, the visit may prompt discussion about the appropriateness of democratic states mixing religion and politics, more so in the aftermath of 9/11, when the purpose of responsible political writing has been to separate the two.

The Indian delegation was led by Maulana Jameel Ahmed Ilyasi, leader of the All-India Association of Imams and Mosques. His organization represents about half a million imams and a network of mosques across India. He is credited for recognizing at an early stage the changing democratic realities of India and providing a platform where mosque leaders can express their views. 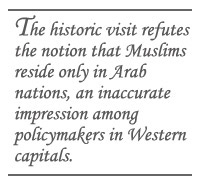 India is the second largest Muslim country after Indonesia, and the fourth largest in terms of its Shia population. Muslims have voted and participated in free and fair elections for more than six decades. An understanding of Israel as a democratic state and the “democratizing” experience of Muslims in India helped Ilyasi to pursue a bond between Indian Muslims and Israel.

Numerous writers comment on the moderate and democratic experience of Muslims in India: New Delhi-based sociologist Imtiaz Ahmed has argued that the trajectory of life for Muslims in the emerging India is broadly positive, along the same path which the rest of India’s 1.2 billion people are moving. New York Times columnist Thomas Friedman writes in his book “The World Is Flat” that jihadists hold no attraction for Indian Muslims and even if a few Indian Muslims were to fall in Al Qaeda’s trap this would be contrary to “the norm.”

The delegation understood that Israel is the only democratic state in the Middle East and there is a basis for an understanding between the two peoples. In Jerusalem, a journalist asked Ilyasi if it was “right” for him, in view of the Palestinian question, to undertake this trip. He answered: “We are aware of the attempts to divide the peoples of book – Christians, Jews and Muslims.” His statement underlined the need for forging an understanding among the three religions. Muslims worldwide need to realize that not every issue involving the Palestinian question is an Islamic issue.

The historic visit also refutes the notion that Muslims reside only in Arab nations, an inaccurate impression among policymaking circles in Western capitals. In fact, the bulk of Muslims live outside the Arab world: India, Pakistan, Bangladesh, Indonesia and Malaysia.

The European policymakers need to understand that the “Islamic focus” on Palestine is incorrect; Palestine is a secular question. The visit not only creates meaningful debate about the status of Israel in the Muslim eyes worldwide, but also strengthens the relationship between two substantive democracies.

The visit could open Muslim minds across the world to understand the democratic nature of the state of Israel, especially in the Middle East where a significant number of working Indian Muslims have a “qualitatively beneficial presence.” 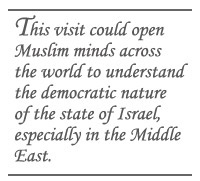 The visit of Indian Muslims should be seen in terms of its inherent significance as an exercise in democratic geopolitics. It also negates ideological attempts to equate Jews with Israel or Zionism and Israel with racism. The trip underlines that Jewish citizens of Israel and Muslims citizens of India enjoy a democratic parity.

In fact, it was the conception of “a democratic polity” in the mind of Ilyasi, when he told reporters in Jerusalem that Pakistan as a state should recognize the state of Israel; what he meant was that Pakistan should abandon “religious hostility” to the democratic state of Israel. His statement was not appreciated by Pakistani writers who do not care much about the democratic experience of Indian Muslims. These critics didn't like when India's tennis sensation Sania Mirza, a Muslim girl from the orthodox neighborhood of Hyderabad, and Israel's Shahar Peer teamed up this summer to win the Women's Doubles at the Bank of the West Classic tennis tournament at Stanford.

Importantly, Ilyasi’s visit was not organized by the government of Israel. It was a return visit in response to a trip to India by an Israeli delegation comprised of Jewish religious leaders.

However, the significance of the trip should not be overestimated. It cannot be compared with historic ice-breaking trips like Pope John Paul II's 1979 pilgrimage to his native Poland or Richard Nixon's 1972 visit to China. Although of unprecedented nature, it was an initiative by a group of religious scholars and journalists with limited appeal among Indian Muslims. Muslim leaders in India, as elsewhere in the world, continue to find it difficult to associate publicly with Israel. For this reason, one leader, Sirajudding Qureshi, dropped out of the delegation at the last minute. According to a report by the Indo-Asian News Service, he feared that news of his journey to Israel could “adversely affect” his Middle East exports. A number of Muslim organizations with a traditional hold on the community offered criticism of this trip. 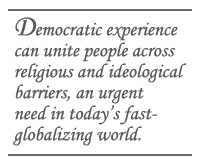 The sponsors of the trip can take solace in the fact that in the recent transformation of India anti-globalization activists and orthodox Muslim organizations find it hard to mobilize public opinion. Increasingly in emerging India orthodox religious organizations are no longer the sole arbiters of Muslim public opinion. Media, political parties, non-governmental organizations and interest groups actively shape people's worldviews.

The Indian Muslims' visit to Israel will deepen the relationship between the peoples of the two countries. The visit to Israel strengthens the argument that democratic experience can unite people across religious and ideological barriers, an urgent need in today’s fast-globalizing world. Yet its immediate impact on molding public opinion in the Indian Muslim community has been limited. Its long-term success will depend on whether orthodox groups can be convinced to join this process of understanding.

Tufail Ahmad is a London-based writer. He can be reached via www.tufailahmad.com.