The Dilemma of Dealing With Terror Central

Ample evidence suggests that elements in Pakistan were behind November’s brutal terrorist assaults in Mumbai claiming more than 160 lives. As the clamor for retribution rises in India, the international community has urged restraint. International relations expert Ramesh Thakur argues that shrugging off the anger about these attacks, suggesting that they are merely an Indian problem, could be a huge miscalculation. India’s citizens are increasingly concerned that their democracy is exposed as ineffective for securing citizens or business. Repeated Pakistan-based attacks along with deceit and denial have made the goal of working for a stable Pakistan less and less realistic. Thakur argues that unless Pakistan’s military is brought under civilian control and support to the terrorist groups turned off, India might have to undertake targeted attacks against terrorists and their institutions. The US needs to act to ensure that any military aid to Pakistan is directed against Pakistani terrorists and Taliban rather than the country’s long-time rival, India. More broadly, Thakur calls for regional governments to collaborate on eliminating the root of ethnic and religious violence by “an urgent redress of group-based political grievances that stops Muslims from being massacred in Gujarat, Christians from being terrorized in Orissa, Hindus from ethnically cleansed in Kashmir, Tamils from being oppressed in Sri Lanka, and civilians from being butchered by terrorists across South Asia.” – YaleGlobal

The Dilemma of Dealing With Terror Central

Could the war on terror intersect with an India-Pakistan war?
Ramesh Thakur
Monday, January 19, 2009 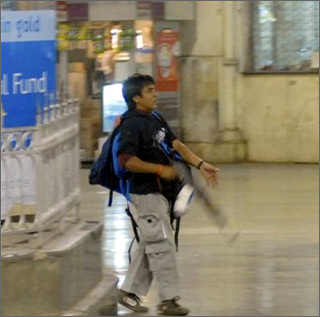 From Karachi to Mumbai: Pakistani terrorist Ajmal Kasab seen walking through the

main railway terminal in Mumbai where he killed scores. Pakistani denial of involvement of its citizens puts India in a bind

WATERLOO: In the winter of 1971, as millions of refugees poured into India from then East Pakistan in the grip of civil war, the world advised India against war but offered no solution to the crisis. Subsequent Indian military intervention helped create Bangladesh from the breakaway state. The current imbroglio over Pakistan’s role in the terrorist attacks in Mumbai and the world’s passive role rings an ominous parallel with the past.

Once again, outsiders advise India against war, but offer no realistic plan to destroy the infrastructure of terrorism infesting Pakistan and endangering the world. War clouds will continue to gather as three key equations change. 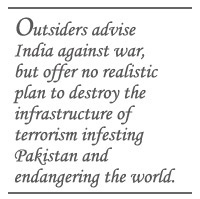 First, as terrorists have attacked India repeatedly with Pakistan-based planning, training and financing, the balance between military response and inaction has shifted toward the former. Pakistan’s military-intelligence-jihadist complex has been lethally effective in outsourcing terrorism as an instrument of policy. India has been second only to Iraq as the scene of terrorist attacks, averaging more than a 1000 terrorist killings annually in the last five years. India’s policy of offshoring the response by appealing to the nebulous international community has been ineffectual. Washington and its NATO allies are more interested in cajoling Pakistan to fight the militants in the lawless border region with Afghanistan. Russia has no leverage over Pakistan. China has a history of using Pakistan to trap India in a subcontinental straitjacket; its media have dutifully parroted Pakistan’s line about India looking for external scapegoats for national intelligence and policy failures. Outsiders’ neglect of India’s sensitivity could result in a double blow: a costly India-Pakistan war and the intensification of export-quality Islamist terrorism as Pakistan falls apart.

Even by the dismal standards of a well established frontline state in the fight against terrorism, the carnage in Mumbai was notable for its savagery, audacity, choice of targets and duration. The possible motives include the desire to provoke Hindu-Muslim riots in India; to strike at the heart of India’s rising global profile as a big emerging market by crippling its financial capital; to sabotage the provincial elections being held in Kashmir; to undermine the peace and goodwill gestures toward India by President Asif Ali Zardari; or to stoke India-Pakistan tensions as a means of drawing Pakistani attention and military resources back from the Afghan border regions to Kashmir and the Indian border. 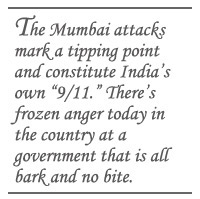 The Mumbai attacks mark a tipping point and constitute India’s own “9/11.” There is a frozen anger today in the country not sensed before at a government that is all bark and no bite. Indians are as contemptuous of their own politicians as angry at Pakistan. Delhi’s intelligence failures and bumbling response were amplified by politicians’ tone-deaf comments that reeked of insolence and imperiousness. After each terrorist attack, the government expresses shock, promises resolute action against the heinous perpetrators and blames a foreign country for arming, financing and training the terrorists, and then retreats into complacency and inaction until the next big attacks. Unvented public rage could morph into rejection of democracy as limp and corrupt.

Second, India may no longer have a vested interest in a strong and stable Pakistan. It would be better off with such a neighbor, just as all South Asians benefit from a vibrant India. But for a decade, even as Pakistan has teetered on the brink of collapse and disintegration, reduced to a bit player, India has prospered and emerged as a big player in world affairs.

Third, Pakistan’s record of double dealing, deceit and denial of Pakistan-based attacks, in Afghanistan and India alike, has been based on four degrees of separation – between the government, army, ISI, and terrorists – whose plausibility may be fading as it is exploited as a convenient alibi to escape accountability. Prime Minister Manmohan Singh, by instinct circumspect in his words, said on January 6 that “given the sophistication and military precision,” the Mumbai attacks “must have had the support of some official agencies in Pakistan.” The combination of training, selection and advance reconnaissance of targets, diversionary tactics, discipline, munitions, cryptographic communications, false IDs and damage inflicted is more typically associated with special forces units than terrorists. 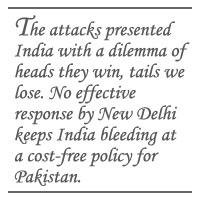 The attacks presented India with a policy dilemma of heads they win, tails we lose. No effective response by New Delhi keeps India bleeding at a cost-free policy for Pakistan. A military response would allow Pakistan’s army to break from fighting the Islamist militants that deepens the army’s unpopularity, assert dominance over the civilian government, regain the support of the people as the custodian of national sovereignty and internationalize the bilateral dispute.

What then might be a way forward? One or both of two further equations need to change. First, the military must be brought under full civilian control. This cannot be done until the government accepts the evidence of the connections to Pakistan from the captured terrorist as well as satellite and cellular phone logs and intercepts. Outsiders, including India, cannot help if the government persists with denial well past the point of plausibility. The dossier provided by India, assembled with the help of the forensic skills of American and British agencies, is compelling. There is justification for Secretary Madeleine Albright’s description of Pakistan as an international migraine and the more popular label of it as the world’s terror central.

The second solution should be attempted only if the establishment of civilian supremacy over Pakistan’s military-intelligence services proves impossible. Like the Americans firing missiles into Pakistan from unmanned drones, India should adopt the policy of taking the fight into neighboring territory from where terror attacks originate. It should root out the human leadership and material infrastructure of terrorism through surgical strikes and targeted assassinations. India does not have such intelligence and military capacity today; it must embark on a crash course to acquire it. And combine it with escalation dominance capability: Pakistan should know that any escalation from the limited strikes will bring even heavier punitive costs from a superior military force. 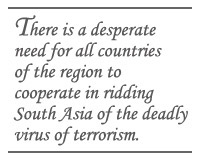 This brings us to the need to change a final equation. Pakistan’s contributions to the war on terror on its western front are of lesser import than its fuelling of terror on its eastern front. Yet the rewards for the former exceed penalties for the latter. And much of the $10 billion US military aid has been directed by Pakistan at India, not the Taliban. India and the US together need to reverse the structure of incentives and penalties.

There is a desperate need for all countries of the region to cooperate in ridding South Asia of the deadly virus of terrorism. This requires a united three-pronged approach of robust and resolute action by the law enforcement agencies acting collaboratively, efficient and credible criminal justice systems and an urgent redress of group-based political grievances that stops Muslims from being massacred in Gujarat, Christians from being terrorized in Orissa, Hindus from being ethnically cleansed in Kashmir, Tamils from being oppressed in Sri Lanka, and civilians from being butchered by terrorists across South Asia. All this can best be done through democratic structures and institutions; not abandoning but upholding the rule of law impartially, strictly and promptly.

Ramesh Thakur is the founding director of the Balsillie School of International Affairs in Waterloo, Ontario.