Divergence Grows Between China and the West – Part I

The international community hopes that China steps up as a global leader on a wide array of crises. But the West is then taken aback when China goes about pursuing policy with seeming unconcern about the world. This YaleGlobal series analyzes the growing divergence between China and the West over two issues – the global economic crisis and festering discontent in Tibet. Due to trade imbalances, China has $2 trillion in reserves, and leaders of debt-laden countries increasingly question China’s whopping trade surplus, its low exchange rates and contributions to global warming. But the world’s most populated nation has its own set of challenges, reminds economist Xu Sitao, including widening income disparity and millions of lost jobs that compound domestic discontent in an economy hurt by falling export orders. Xu explains that the Chinese leaders recognize the need for sustainable growth, efficient energy consumption and reduced imbalances in income and trade – and is taking the necessary tough steps while extending some regional aid. Yet like so many other nations, China’s hands are tied when it comes to demonstrating international leadership or offering aid, especially on policies preferred by the West. China’s priority is looking after the interests of its own people, which in the long term benefits the world. – YaleGlobal

Divergence Grows Between China and the West – Part I

The rest of the world fails to appreciate China’s concerns over its own domestic challenges
Xu Sitao
Thursday, December 18, 2008 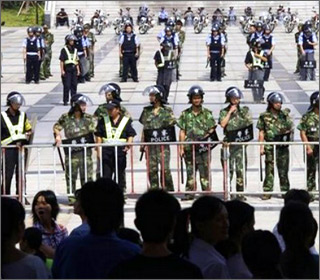 Law and labor: Workers laid off from Chinese toy factory face the police. Unrest of the unemployed is a greater concern to Beijing than securing leadership in the world economy

BEIJING: As the world economic crisis deepens, there is a growing divergence over how China with its $2 trillion reserve can clean up the mess left by a Wall Street financial bust. US and European leaders urge China to step up to its role as a global financial leader, by lifting restrictions that keep its currency artificially low, easing global trade imbalances, doing more to fight global warming, and being more willing to help the rest of the world.

While China is willing to help its neighbor – as with the recent currency swap arrangement offered to South Korea – it is focused on dealing with economic crisis by taking steps to promote exports and growth. For China, maintaining a 8 percent growth rate is not just an economic but political imperative, and it trumps any supposed failure to provide world leadership. Government economists anticipate that China needs at least 8 percent growth in order to create ample new jobs. Rising unemployment combined with the growing rural-urban economic gap could bring the most serious challenge to the government. 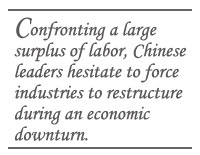 However, the stance China seems to be taking to meet the challenges, by investing in domestic infrastructure and lowering its exchange rate, is certain to provoke a confrontation with the incoming Obama administration. As candidate for the US presidency, Barack Obama accused China of keeping the value of its currency artificially low to boost export. On top of that, international pressures continue to push China to make immediate drastic changes in food safety, climate change, labor standards – an ever-growing laundry list of issues.

Yet in China, maintaining social harmony depends on growth which in turn depends on exports. Confronting a large surplus of labor, with several million of immigrant labor in China’s export-based economy already laid off, Chinese leaders hesitate to force industries to restructure during an economic downturn. China questions why it must abandon using the exchange rate as a tool for boosting the economy when almost every other country pushes currencies lower. Chinese economists also point out that allowing the renminbi to appreciate may not convince consumers – largely concerned over the lack of social safety nets – to open their wallets.

Export growth in China contracted by 2.2 percent in November, the first outright contraction in decades. China took steps in mid-November to boost the economy with a stimulus package that inherently favors infrastructure investment over consumption – an implicit endorsement of the falling value in the renminbi against the dollar, despite urgings to the contrary by government officials in Europe and the US, who argue that China’s high savings rate discourages Chinese demand for international goods. 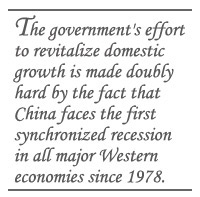 The government's effort to revitalize domestic growth is made doubly hard by the fact that China faces the first synchronized recession in all major Western economies since 1978, the year it embarked on economic reform. Preventing a freefall of economic growth and reversing the adverse effects that the export sector has suffered are the country's immediate objectives at least for the next two years. The carnage in Guangdong province, where thousands of export-oriented factories have gone bust this year, suggests how vulnerable the Chinese economy is to weakening external demand.

China must take a multi-pronged approach by, first, sustaining economic growth with all tools available; secondly, liberalizing certain prices (e.g., energy) so that imbalances can be reduced within the economy; and thirdly, maintaining a strong bias towards job promotion when fundamental improvement of farmers' interests is being constrained by political factors. Indeed, despite the landmark decision in extending farmers’ leases, it’s unrealistic for farmers’ incomes to increase substantially in the short term when 40 percent of their incomes is derived from migrant workers.

The harsh reality is that the wages of migrant workers that make up a huge portion of Chinese peasant income cannot be easily or quickly replaced. For now, their hardships are obscured by the fact that many are forced to return home after factories closed during a time that coincides with annual closings for the Chinese New Year.

Like it or not, the West must come to terms with the fact that China has its own set of complex and weighty issues such as widening income disparity and millions of lost jobs in the slowing economy that add strain to an already-tense national state that has endured natural disasters and international scandals.

The tradeoff between economic growth and job creation in China is far more acute than many China watchers appreciate, and the leadership is taking steps to protect jobs: Minimum wage rules are no longer enforced, and employers’ contributions to pension schemes have been lowered to mitigate job losses.

Looking far beyond the global recession, China knows that it must simultaneously pursue sustainable growth as characterized by economic growth with more efficient energy consumption and reduced income disparity, particularly between affluent coastal urban areas and the vast Chinese hinterland. 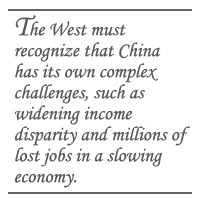 Therefore, China must introduce countercyclical initiatives in re-inflating its economy while also making gradual shifts towards more balanced growth. To take energy demand as an example, subsidizing companies and consumers with low fuel prices has been positive for manufacturing and auto industries. But energy prices must be normalized, and beginning January 1, a fuel consumption tax will be levied – a clear signal and big step by the government to discourage energy consumption to achieve medium-term growth with lower energy intensity.

The measure will inevitably decrease domestic demand. To offset the adverse impact, expect the government to increase subsidies to the urban pool and to farmers whose livelihoods depend upon tractors and other motor vehicles. As China begins to even out the economic imbalance between investment and consumption, public finance is on the verge of being drastically changed in such a way that consumers pay less tax.

Tough choices are being made. Exceptional political and economic maneuvering is required to prevent social unrest and financial dilemmas that could easily result in internal turmoil, rendering China powerless to take on any international leadership role and most likely worsening the worldwide crisis.

The recent incident concerning Beijing’s abrupt cancellation of the EU-China Summit due to President Nicolas Sarkozy’s meeting with the Dalai Lama can be seen by China’s Western counterparts as an overreaction. Yet perhaps China’s concerns over social issues inflicted by potential economic deceleration are far greater than the outside world comprehends. Therefore, Beijing resorts to using a rising nationalism, not just conventional countercyclical measures, to achieve challenging goals. 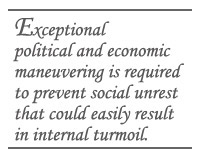 China has demonstrated its willingness to help other regional economies that could be vulnerable to financial shock; for example, China and South Korea officially signed a bilateral swap agreement of 180 billion renminbi, intending to provide liquidity should either party be hurt by the global recession. Similar agreements between China and other regional economies will likely follow

While China is keen on being a responsible global player, the government's priority is to look after its own people. Chinese officials feel the biggest contribution they can make to ensure a fast turnaround of the global economy is to sustain China's own growth – however they can. Conversely, the more they must field unreasonable demands from abroad, the less they feel they can focus on their job at hand. The world is probably not ready to pay the price should Chinese leaders fail.