Divergence Grows Between China and the West – Part II

The West expresses increasing concern as China seems bent on hewing its own course, even on domestic matters such as handling unrest in Tibet, while China naturally resents foreign interference in domestic affairs. In the second of this two-part YaleGlobal series on divergence in foreign policy between the West and China, law professor Michael Davis addresses the rising tension over Tibet as demonstrated by Chinese cancellation of the summit with the European Union. He notes that Chinese talks with Tibetan exiles have fallen by the wayside. After a violent crackdown on Tibet protests in March, some in the West considered boycotting the Beijing Olympics. China since has threatened to shun any international leaders who meet with the Dalai Lama, spiritual leader of Tibet. Tibetans aspire for autonomy in 11 policy areas, including language, religion, education, environmental protection, utilization of natural resources, and trade. Despite questions over different treatment for areas like Hong Kong, China is intent on maintaining unity in what it regards as its sovereign territory. Punitive actions like boycotts of European goods will only invite retaliation, and isolation of Tibetan exiles only makes the demands and difficulties more pronounced. Coordinated international efforts aimed at convincing China to acknowledge the Dalai Lama and Tibetan desires could actually sooth a festering domestic challenge. – YaleGlobal

Divergence Grows Between China and the West – Part II 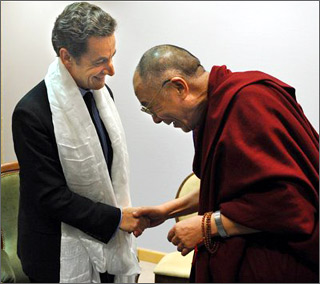 Spiritual encounter: French President Nicolas Sarkozy's meeting with the Dalai Lama, which angered China, is not backed by any policy on Tibet

HONG KONG: After years of talking to Tibetan exiles about conditions in their homeland, Chinese officials have made it clear that they were not serious about it. Unless the international community adopts a coordinated position on Tibet’s autonomy this may not bode well for either Tibet or for China’s relations with the world.

During the March uprising in Tibet, Chinese officials were pushed to reopen six-year old discussions with the Dalai Lama. Deng Xiaoping had years ago said “anything was negotiable except independence,” and Tibetans had long ago abandoned their earlier claim to independence in favor of autonomy. With no progress after six rounds of discussions, Deng’s words rang hollow and the Dalai Lama had largely given up on Beijing. The tragic March crackdown moved him to try again in talks in May, July and November. 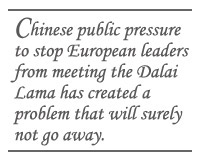 After the Olympics, however, the Chinese remained indifferent and the talks broke down. In the past couple weeks, Chinese public pressure to stop European leaders from meeting the Dalai Lama has created a problem that will surely not go away. Though European leaders ignored such pressure this time, the international community needs to develop a coordinated response to reject such bullying and encourage a Chinese rethink.

Chinese indifference was on display in the recent breakdown. After a July Chinese request that Tibetans outline under the PRC constitution the autonomy they seek, Tibetan representatives produced a “Memorandum on Genuine Autonomy for the Tibetan People.” The memorandum elaborates Tibetan “aspirations” for autonomy in 11 policy areas, including language, culture, religion, education, environmental protection, utilization of natural resources, economic development and trade, public health, public security, population migration and cultural, educational and religious exchanges with other countries. All of these are covered by existing unfulfilled national ethnic autonomy policies enacted under Article 4 of the PRC Constitution, except those relating to public security, migration and external exchanges, which appear instead to track the Article 31 “one country, two systems” Hong Kong formula.

The Chinese government has long refused to apply Article 31 to Tibet, though the language of the article offers no justification for this. Such model is believed to have been fashioned after the failed 1950 Sino-Tibetan “17-point Agreement,” under which China originally committed to Tibetan autonomy. Though a few outside critics have criticized the Tibetans for demanding too much, no reason is offered as to why they should accept less than genuine autonomy. Because of China’s refusal to provide any significant degree of autonomy under its national ethnic minority laws, Tibetans have proposed a hybrid combining elements of both formulas. 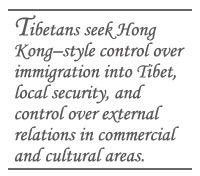 Similar to Hong Kong, their proposal includes a specification that local laws within the scope of autonomy not be subject to central approval – as now required in minority areas – and that the terms of their agreement with the Central Government not be subject to the Central Government’s unilateral amendment. They further seek Hong Kong–style control over immigration into the Tibetan areas and local public security, as well as control over external relations in non-sensitive commercial and cultural areas. Such autonomy is typically expected for indigenous peoples under international practice, as is spelled out in the 2007 UN Declaration on the Rights of Indigenous Peoples.

Tibetans have also proposed to unify contiguous Tibetan areas. Chinese officials frequently emphasize that this would constitute one quarter of the landmass of the present day PRC. These large, mostly mountainous, and often arid areas are in fact already designated as Tibetan areas by the PRC – being divided into 13 contiguous areas instead of one. This proposal, like all others, is subject to negotiation, which China has so far refused.

To everyone’s dismay, the Tibetan memorandum only met with Beijing’s derision and became the basis for the worldwide campaign of isolation. It seems the discussions were only designed to smoke out and block Tibetan aspirations. In the Chinese official statement issued on November 10, 2008, the Tibetan request for “genuine autonomy” is treated as a request for “a high degree of autonomy,” as promised to Hong Kong. China accuses Tibetans, in seeking such “high degree of autonomy,” of seeking “half-independence” and “covert independence.” No explanation is given why the exact same language applied to Hong Kong means only autonomy. 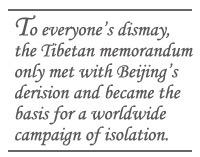 The Tibetans are further accused of continuing to “collude with such dregs as ‘democracy activists’, ‘falunkun (falun gong) elements’ and ‘Eastern Turkistan terrorists,’” though no evidence of this is given. In seeking control over Chinese migration into Tibet, the Dalai Lama is accused of “ethnic cleansing.” The exile government is characterized as a “small group of splittists,” and the meetings are cast as private meetings designed to persuade the Dalai Lama to “give up his splitting activities.” The statement declared, “We never discussed the so-called ‘Tibet issue” and will “never make a concession.”

That this problem will persist is made clear by recent Chinese bullying of foreign leaders not to meet the Dalai Lama. To dissuade French and current EU President Nicolas Sarkozy from meeting the Dalai Lama, China called off a December Sino-EU summit slated to discuss the financial crisis. Similar bullying tactics have targeted Germany, the UK, the US, the Vatican, Poland, India and the Czech Republic – the latter being next scheduled to take up the EU presidency.

As with the fiasco over the Olympic torch last summer, Chinese bloggers have again called for a boycott of French goods. While Chinese officials cautioned people to react “calmly,” their tendency to manipulate such nationalist outbursts is transparent. They may, however, be cool to a Chinese boycott of French goods, given the risk that Europeans could react in kind or Tibetans could react by calling for a global boycott of Chinese goods – probably a more daunting prospect for the Chinese than for the other side.

The Dalai Lama is clearly winning the battle for hearts and minds in the West. A recent public opinion poll on the popularity of world leaders, commissioned by the International Herald Tribune, found the Dalai Lama was the most respected world leader among Western Europeans and Americans. The Chinese leader languished near the bottom. Perhaps Beijing has not fully considered the cost of their unseemly attacks on this revered Tibetan monk.

Of course, Western business leaders concerned about Chinese trade sanctions stand on the other side, posing a difficult dilemma for Western leaders. Do they have the moral integrity to meet with the Dalai Lama in the face of China’s condemnation and possible commercial sanctions?

Coordinated effort by national leaders worldwide may be the only way to cut the cost of such political virtue. This should not be conceived as conspiracy, but rather as a coordinated effort to maintain an open door to the Dalai Lama and reject Chinese efforts to isolate him. This should be accompanied by constructive efforts to help China to better understand its international obligations to this indigenous national minority.

Michael C. Davis is a professor of law at Chinese University of Hong Kong. For further analysis of this issue see Michael C. Davis, “Establishing a Workable Autonomy in Tibet, Human Rights Quarterly, Vol 30, 227-58, May 2008.
Click here to read the article.