Don’t Give Up on WTO, Fix It

Contrary to what its most adamant critics maintain, the World Trade Organization (WTO) is a primary defense for poor and oppressed nations against exploitation from powerful nations and companies. Economist Richard G. Lipsey traces how the international institution that regulates trade emerged from policies facilitating globalization during the latter half of the 20th century. The WTO does not simply serve the interests of the US and the EU, as some argue, but plays a crucial role in controlling an insatiable quest for profits. Of course, disparities exist among nations with large and small economies, and small nations could not hope to impose trade sanctions against a large county. Yet while the WTO dispute settlement process could undergo some reform, the system overall is too beneficial for contemplating its outright elimination. The WTO may not impose the same environmental and labor standards on all countries, yet that is not a fatal flaw, according to Lipsey, who labels it “policy imperialism” to require poor nations to implement standards only recently affordable for wealthy nations. While rich nations engage in behind-the-scenes negotiations, the WTO still provides a major forum for poor nations to voice opposition and form alliances. In a world caught in the inexorable process of globalization, the regulatory system of the WTO is better than poor nations lacking any voice in a “no-rules” system. – YaleGlobal

Don't Give Up on WTO, Fix It

The WTO may not be perfect, but its elimination is a recipe for trade chaos
Richard G. Lipsey
Tuesday, April 4, 2006 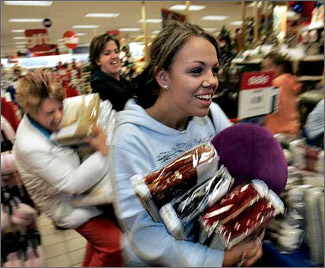 VANCOUVER: One major target of those protesting globalization on behalf of the poor is the World Trade Organization (WTO). Yet, as the administrator of our rules-based international trading regime, it especially benefits the smaller, less powerful nations, and no feasible alternative has been suggested.

At one extreme, the WTO’s opponents argue that all institutions supporting globalization should be abolished; the other extreme admits that globalization is inevitable, requiring some rules-based system, but the WTO is so defective that it does more harm than good. Before assessing these positions, we need to analyze globalization and the WTO. 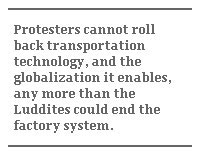 New technologies and policies drove the globalization that began in the second half of the 20th century. Containerization and improvements in ship design greatly reduced transport costs, while new information and communications technologies allowed worldwide coordinated production in ways that were impossible 50 years ago. As a result, the 19th century pattern of globalized trade – with developed countries exporting manufactured goods to less developed countries in return for agricultural produce and raw materials – has given way to a new pattern in which parts of individual manufactured goods are made throughout the world in a supply-chain system. Protesters cannot roll back these far-reaching changes, and the globalization that they enable, any more than the 19th century Luddites could end the factory system.

In policy, governments have sought to reduce the high levels of tariff protection that were erected from 1918 to 1939. The vision of post-World War II reformers was to remove high tariff walls, thus reintegrating the world trading system and bringing prosperity to all participants. The General Agreement on Tariffs and Trade (GATT) was the enduring result. Through eight rounds of bargaining, members greatly reduced tariffs. World trade grew dramatically, and their economies prospered.

In 1995, the WTO replaced the GATT, an accidental creation resulting from US rejection of more ambitious initiatives. The WTO had a substantial institutional structure that had been lacking in the GATT.

Because the GATT had already reduced the trade barriers for which there was least resistance, the WTO has faced a tougher job. The powerful developed nations, who were the majority of the charter members, had – albeit often reluctantly – accepted reduced trade barriers on manufactured goods for which they typically had competitive advantages. But they were reluctant to do the same in areas where they lacked competitive advantages, particularly agricultural commodities and textiles. So the tougher issues – trade in services, intellectual-property protection and agricultural subsidies – had yet to be settled by an ever-growing membership that made the WTO rule of proceeding by consensus increasingly cumbersome.

At a series of bi-annual WTO ministerial conferences, the less developed countries applied pressure to deal with their priorities. The fourth conference began the Doha Round of negotiations, the first round since the WTO replaced the GATT. Progress has been slow, but considering the entrenched vested interests of the developed countries, this is not surprising. The fifth conference in Cancun broke down with little progress as a new grouping – 22 developing nations called the G-22 – refused to handle issues that concerned the developed countries while pressing for the end of EU and US agricultural subsidies.

The most recent conference in Hong Kong produced results that, although disappointing to many, were at least positive. Agreement was reached in principle to end all subsidies of agricultural exports by 2013, as well as giving more market access to the poorest nations’ exports to the industrialized countries. The tough bargaining over details was postponed until this year. In the meantime, skepticism is justified. Will the developed countries end export subsidization? This would be a good beginning, but not the end of the problem, since subsidization of production for the home market hurts producers in poor countries, denying them major export markets.

So, should the WTO be abolished as its harshest critics advocate? No, because the WTO is the best hope for those who would be most oppressed in a lawless world – where the powerful, particularly the US and the EU, could behave as they wished. In contrast, as part of its rule-based regime, the WTO has a dispute settlement function that has heard more than 300 cases and settled many. Furthermore, having the developed world listen to the G-22’s complaints in Cancun and then agreeing to international negotiations to address them would have been inconceivable without the WTO.

But isn’t the enforcement of dispute settlements hindered by the disparities in economic power? Nations with large economies can use trade sanctions against small nations, but the small nation that tries the same sanctions against a large nation often inflicts most harm on its own economy. This is a major defect. But the dispute-settlement mechanism has accomplished much, and to discard it because of imperfect enforcement would be unfortunate. Reform is needed instead – with larger economies agreeing to graduated enforcement mechanisms, including stiffer penalties for themselves.

Is the WTO a failure because it does not permit trade sanctions on those who pollute their environments or exploit their laborers? To the contrary, the poorest countries fear that advanced countries would use environmental and labor standards written into the body of trade agreements, with trade sanctions for non-performers, as concealed non-tariff barriers. This is not to argue against WTO efforts to end slave labor and eliminate forms of pollution with worldwide effects. But it is policy imperialism to argue that the poor must accept the standards of environmental and labor protection that the rich countries can only now afford.

Don’t the rich countries exert too much power over WTO negotiations? No doubt they do exert much influence on the behind-the-scenes negations needed to achieve unanimity, often ignoring the poorer countries. But at least the meetings provide a forum for poor nations to speak out and broker alliances, such as the G-22, and for using those alliances to exert influence on the developed nations. The alternative – no voice in a no-rules system – would be much worse.

Is the process undemocratic? Representatives of sovereign nations conduct the negotiations. So the protesters assume that they know better than their own governments what is good for their country. This, while possible, seems unlikely considering that 155 governments, of all political stripes, remain members.

Isn’t the WTO a tool for those who advocate a doctrinaire form of laissez faire liberalism? There are indeed many WTO supporters who believe that the unaided market will meet all social requirements – as well as many, including this author, who believe that the free market needs public-sector assistance if it is to meet societal needs for justice and growth. Both sides agree that most, if not all, trade restrictions are harmful and, therefore, both support attempts to reduce such restrictions.

For sure, the WTO is a flawed institution – one that needs reform not abolition. Its bureaucracy is probably too small to handle the job. Decision-making by unanimous agreement is cumbersome, encouraging blocking coalitions. One reform would be a system of representation by countries selected according to such criteria as regions, level of development, and trading interests, with a mechanism for rotation. In the meantime, until a better rules-based system for governing trade relations is developed, we need to support the one we have.

Richard G. Lipsey is emeritus professor of economics at Simon Fraser University in Vancouver, BC, Canada. He has held posts in the UK and Canada and has been a visiting professor at Berkeley, Wisconsin and Yale universities. His latest book, written with Kenneth Carlaw and Clifford Bekar, is “Economic Transformations: General Purpose Technologies and Long-Term Economic Growth,” published by Oxford University Press in 2005.
Click here to read an excerpt from the book.