The world is more connected and informed on global events than ever before, and possibly more competitive over limited resources. Conflicts over sovereignty – the right for nations to do as they please, disregarding the interests of the world at large – could become more common. A quarrel between the presidents of France and Brazil over reflects a larger battle over national sovereignty: Emmanuel Macron criticized Brail for loosening environmental regulations that contributed to fires destroying large sections of the Amazon rainforest. Bolsonaro contends that the Amazon is an internal matter for Brazil. France may block a trade deal between the European Union and the wider Latin American trade bloc of Mercosur. So many problems require global action and discipline, yet the world is divided on global governance, explains Jean Pisani-Ferry. Many policy makers anticipated that “Binding global agreements, or international law, would be implemented and enforced with the help of strong international institutions.” Instead, many leaders embrace the short-term benefits of economic nationalism and delay tackling global challenges like climate change. Pisani-Ferry encourages a search for new mechanisms to manage collective action besides treaties. Possibilities include regional groupings and cross-border urban and other special-interest initiatives along with trade deals and sanctions. – YaleGlobal

Read the article from Project Syndicate about the divide over global governance versus national sovereignty.

Jean Pisani-Ferry, a professor at the Hertie School of Governance (Berlin) and Sciences Po (Paris), holds the Tommaso Padoa-Schioppa chair at the European University Institute and is a senior fellow at Bruegel, a Brussels-based think tank. 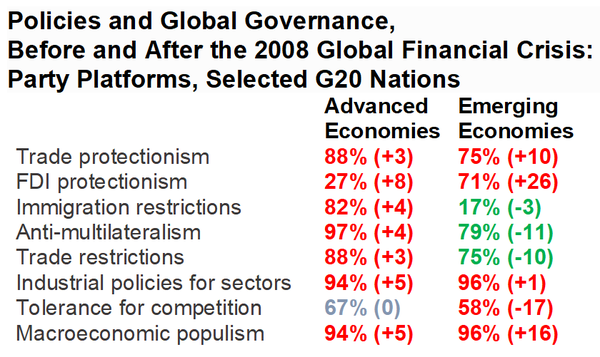 A working paper from the Peterson Institute for International Economics examines party platforms for populist stances on trade, immigration and protectionism - and shows an increase after the 2008 global financial crisis (Source:  Monica de Bolle and Jeromin Zettelmeyer, “Measuring the Rise of Economic Nationalism,” August 2019)

Environmental Disaster in the Amazon

The Amazon Belongs to Everyone: Project Syndicate