A Drug-Free Afghanistan Not So Easy

The recent announcement of surging Afghan poppy production, while no surprise, is indicative of a dangerous trend – one that may ultimately undo the recovery of the fragile Asian state: Illegal poppy production now, more than ever, forms the basis of Afghanistan's economy. The fledgling state's existence as a cornerstone of both the war on terror and international anti-narcotics campaign is no coincidence. In fact, as Paula Newberg writes, narcotics production and trafficking is tightly woven into Afghanistan's recent history. From the 1980s anti-Soviet campaign to today's US-led anti-terror movement, Afghan drug lords have functioned as Western military and intelligence assets – and gained economic and political clout. Now, with the new Afghan government struggling for legitimacy, and the international development community immersed in in-fighting, the convalescent state finds itself at a crucial juncture. In the end, says Newberg, "Only a legal economy, honest politics, and educated citizens will make it possible for Afghanistan to survive." – YaleGlobal

A Drug-Free Afghanistan Not So Easy 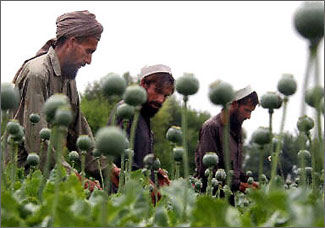 Poppy fields forever: A bumper crop in Afghanistan spells problems for the Afghan society, politics and their relations with Western donors

WASHINGTON: Last week, the International Narcotics Control Board made official what everyone in Afghanistan already knew: Poppy production rose to near-record levels in 2004. This is one indicator of economic growth that spells trouble for the country.

While the surging poppy production - now accounting for at least 40 percent of the country's small GDP – could translate into lower street price for heroin, it rocks the country's rickety economic prospects and further complicates Afghanistan's warped politics. This dismal news reflects deep divisions within the development and political communities about how to sustain post-conflict recovery in a drug-torn state. Poppy has therefore emerged as major bone of contention among donor governments, and between donors and the Afghan government. Without acceptable solutions, Afghanistan's renewal could easily fail.

Afghanistan's narcotics problems have long accompanied its long journey through war. Poppy profits helped finance the anti-Soviet war of the 1980s: Almost every mujahidin group profited from drugs, but patrons valued Soviet defeat over stopping trafficking. When anarchy overtook war, narcotics trafficking increased dramatically. After central Asia's borders opened in 1991, Afghanistan became the primary source of opium in London and Moscow. By the time the Taliban seized power, solving the drug problem had risen high on the West's diplomatic agenda. The Taliban subsequently banned cultivation and production just before it lost power. The absence of poppy was more formal than real: Poppy was a profit-center for war, so the ban was meant to help correct a market glut in an otherwise devastated economy. When the Taliban was overthrown in late 2001, soon after the ban was enforced, almost no poppy was grown in Afghanistan.

That's when current troubles began. The new Afghan government certainly didn't want illegal poppy. But warlords across the country – patronized substantially by the western coalition in its fight against Al Qaeda – invested in poppy to support their private armies. President Hamid Karzai – and crucially, his major donors – missed his chance. Desperate for political unity, he cultivated warlords to avoid cultivating conflict. Poppy was outlawed, but took over the economy.

How important is poppy for today's Afghan economy? The answers loom large and small. Before war overtook the economy, Afghanistan could easily feed itself and even export foodstuffs. But violence and subsequent anarchy destroyed the state; in the wake of that destruction, drugs traders became surrogate bankers. For a small investment in food seeds, farmers agree to grow poppy. Though they rarely see direct profits from the crop, poverty-stricken rural Afghans strike these deals just to survive. For the state as a whole, the consequences are equally severe. Poppy is illegal, and illegal profits cannot be taxed. Drugs, therefore, enrich a few at the expense of the many, and cost the government (in law enforcement) without contributing to public funds.

This is how humanitarian and development groups understand the economy. They note, quite accurately, that poppy fills an economic vacuum, and argue that only investments in the rural economy, education, and health can release Afghan farmers from a tragic poverty cycle. Afghanistan ranks fifth from the bottom in the UN's human development index, and even with the benefits of foreign assistance, 15 percent of the population received 80 percent of the benefits of growth, with rural areas disproportionately disadvantaged. Even though Afghanistan now has a banking system and unified currency, and aspires to join the World Trade Organization, farmers remain small cogs in an illegal economic machine – and the machine itself must be rebuilt from scratch.

But discord now reigns among aid providers and development experts about how to remove drugs without creating greater poverty and courting instability. Recent debates have highlighted the eradication policies that are promoted by major donors (and political allies) in the United States and UK. Fearing the premature eradication of poppy – removing it before alternative crops and stable economic policies are put in place – an alliance of 31 international and Afghan aid organizations publicly petitioned US Secretary of State Condoleezza Rice this winter to end current US poppy eradication practices in Afghanistan. They cited the fears of grassroots organizations – more than 350 were represented in the letter – that a political system dominated by drug profiteers will compromise Afghanistan's potential recovery. The World Bank echoed these sentiments last week, warning against the "vicious cycle associated with the opium economy warlords." Many observers rightly anticipate that parliamentary and local elections, scheduled for later this year, could be held hostage to narcotics profiteers and provoke more instability.

But stability means something different to the US-led anti-terror coalition, which views Afghanistan as a signal player in a global war – and predictably, Rice promised little. Until now, the coalition has alternately ignored drug production, cultivated drug lords as intelligence and military assets – and occasionally provided funds to areas that might otherwise support alleged terrorists. The result: High poppy producing areas receive disproportionate assistance that – no surprise – often ends up in the hands of warlords already enriched by poppy. Power doesn't change hands, law and order deteriorates, Afghanistan's development becomes increasingly unbalanced, and narcotics flourish in Afghanistan and among its neighbors.

But with cultivation and production rising steadily and dangerously, coalition partners are looking for quick fixes to Afghanistan's problem. For them, eradication seems an efficient tactic. Indeed, Afghan farmers in some areas believe that aerial spraying began last autumn – despite US and UK denial – and now fear that crop contamination will turn a short-term tactic into a strategic disaster. And of course, drug lords can live off their stockpiles, but farmers can easily starve.

The coalition's backup strategy is to condition all economic aid to tangible anti-narcotics process. The goal isn't wrong: Combating trafficking is a clear social and economic good. But holding all recovery to an anti-drugs standard is a risky venture. Afghans know too well the devastation that poppy wreaks on its fragile politics. They also know that when fighting drugs weakens the Afghan polity, the anti-narcotics fight fails; when fighting terrorism allows drugs to flourish, the anti-terror fight fails, too. In fact, some Afghan ministers have been warning of the dangers of drug cartels, narco-terrorists, and possible state failure since Karzai took office three years ago.

Even more, Afghans know that a commodity is valuable only if someone buys it The market for opium is not in Afghanistan but in Europe - where Afghan opiates account for at least 75 percent of the market - and if any place is to benefit from these blunt anti-poppy measures, it will be Europe, not Afghanistan. Although Karzai has assured the Narcotics Board that Afghanistan will take all measures to become "narcotics-free," his Minister of Counter-Narcotics continues to remind donors that drugs are a multi-dimensional problem whose solution requires shared responsibility – and refuses aid that is "tied, in any direct or indirect way, to the fight against narcotics."

These disputes pit rich donors against poor farmers, and Afghanistan's hard-won sovereignty against a global anti-narcotics struggle. When Afghanistan's state failed, the world learned that Afghanistan can't go it alone – on drugs or anything else. Only a legal economy, honest politics, and educated citizens will make it possible for Afghanistan to survive. The first step is taking its government seriously by helping it replace drugs – investing, not destroying. Otherwise, Afghanistan's failure will be built on the self-defeating intentions of others.

Paula R. Newberg is a Guest Scholar at the Brookings Institution.