Rodrigo Duterte has lost patience with 100 containers of Canadian trash sitting in a port for years, suggesting he would declare “war” and return the containers to Canada himself. The angry rant captured global media attention. The containers include household and electronic garbage. “More than 100 of the containers were shipped to Manila by a Canadian company in 2013 and 2014, improperly labelled as plastics for recycling,” reports CBC. “Customs inspectors discovered they actually contained garbage, including soiled adult diapers and kitchen trash.” A court ordered the trash returned to Canada in 2016, but Canada has tried to convince the nation to handle the waste’s disposal on location. A British Columbia lawyer agrees that Canada has violated international treaties by sending waste to other nations without informed consent. The quarrel highlights the challenges of growing piles of waste from an expanding global population that enjoys growing prosperity and a disposable culture that resists conservation, repairs or reuse of old and unwanted items. – YaleGlobal

Filipino President Duterte lashes out over 100 cargo containers of Canadian trash left at a Manila port for years
Thursday, April 25, 2019

Read the article from CBC about the Filipino president’s fury over old mislabeled trash from Canada. 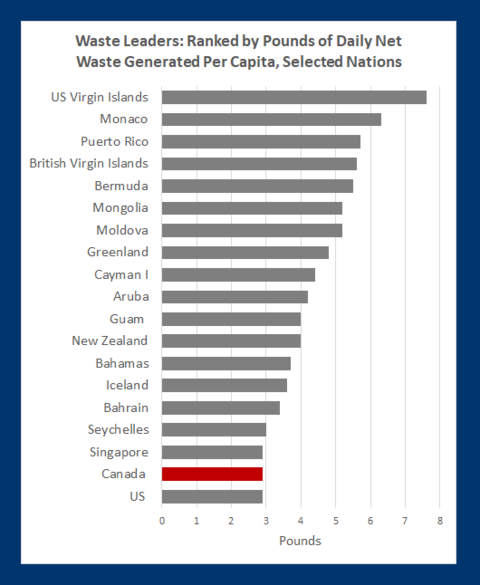 Growing piles of trash: The list of waste leaders points a finger at countries that are wealthy and destinations for cruise ships   (Data Source:  24/7Wall St.)

Waste Not, Want Not: Industries Innovate With Trash

Elimination of Food Waste Could Lift 1bn Out of Hunger

CSR Asia: Electronic Waste in Asia Is Piling Up