Early Globalization and the Slave Trade

While many are aware of the "triangular" slave trade among Europe, Africa and the Americas in the 18th century, few people realize that Asian-European trade was also instrumental in sustaining the exchange of human slaves. For example, French ships carrying European goods to Asia returned with cowry shells and Indian textiles valued by West Africans. On the African coast, traders exchanged these Asian products for slaves who in turn were sent to France's New World colonies. The circle was completed when crews loaded sugar and other goods from the Americas on board for shipment to France. The Asian-European trading relationship was a fundamental step in the African slave trade, playing a crucial role in the development of an integrated global economy in the early modern era. - YaleGlobal

Early Globalization and the Slave Trade

Tragic irony: The archaic institution of slavery played a crucial role in the 18th century development of the modern world economy
Robert Harms
Friday, May 9, 2003

NEW HAVEN: The role that international trade has played in developing a globally integrated economy is well known. Along with growth and prosperity, trade has brought suffering and exploitation. However, nothing comes close to the brutality and inhuman suffering inflicted on human beings for such a long period as the slave trade. The misery of the African slaves formed a vital link in the trading system that connected the continents and formed the backbone of the global network of commerce.

Contrary to the popular image, the triangular slave trade that linked Europe, Africa and the New World was not a closed circuit. Rather, it formed an essential bridge between Europe's New World trade and its Asia trade. As such, trade in slaves was a crucial element in the development of the global economy in the 18th century. A brief look at the international commerce of France illustrates this point.

In the 18th century, France carried on two types of trade with its New World colonies. One was the direct trade by which France sent wheat, wine, metal objects and building materials to the New World in exchange for sugar, and, to a lesser degree, cotton, cocoa, tobacco, rocou and coffee. The other was the triangular slave trade, which the French referred to as the "circuit" trade. French ships loaded with trade goods sailed to Africa, where the goods were exchanged for slaves. The slaves were then taken to France's New World colonies, where they were exchanged for sugar and other plantation products. Both types of trade were conducted largely by barter: Ships left France carrying a small fortune in goods, but almost no money. 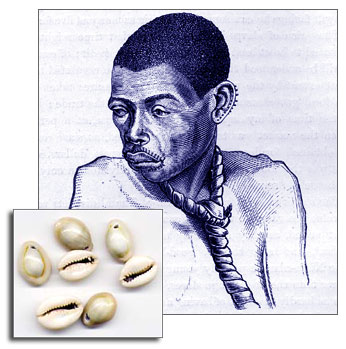 African slave with coffle rope around the neck, and cowry shells for which slaves were often bartered (Source: Courtesy of Alderman Library, University of Virginia)

There was one basic economic fact - little noticed by historians - that provides the key to the relationship between the direct trade and the circuit trade. (1) When a French ship arrived in the New World with a load of slaves to be bartered for sugar, the value of the slaves equaled about twice as much sugar as the ship could carry back to France. For that reason, the most common form of slave contract called for 50 percent of the sugar to be delivered immediately and the remainder to be delivered a year later. The second delivery carried no interest penalty, and so the slave sellers were in effect giving buyers an interest-free loan.

The major problem was how to return the remaining 50 percent of the sugar back to France. The solution was provided by the direct traders. Ships coming to the New World directly from France carried products that were of relatively low value in relation to their bulk. The amount of sugar that could be obtained in exchange often filled only a third to a half of their cargo holds. The excess space was used to carry sugar back to France for slave traders. Over the years a symbiotic relationship developed between the direct traders and the circuit traders. The income from hauling sugar for slave traders provided the margin that made direct voyages profitable, and the direct traders provided a means by which the slave traders could recover the remainder of their sugar.

This relationship was destroyed in 1722 when the French Company of the Indies banned all private traders from the slave trade. This act not only affected the private slave traders, but also the direct traders because the company would not pay them to carry the excess sugar. The mayor of Nantes responded angrily:

"Two major bankruptcies have just been declared in Nantes, and we greatly fear that there will be more. The returns from our colonies have shown a loss ever since the Company of the Indies began to enforce its monopoly...the colonies will fall along with the trade of our cities. (2)

The move jeopardized the company as well. Because it operated as a closed economic circuit, it had no way of retrieving the excess sugar. Sometimes, in desperation, the company actually sent empty ships to the Caribbean to bring back sugar, but this practice was too inefficient to be sustained. It was estimated that the company recovered only about a third of the money it invested annually in the slave trade. Because the company's board of directors could not figure out a way to maintain its monopolistic practices and still conduct the slave trade at a profit, it voted in 1725 to abandon its monopoly and open the slave trade to private traders. The symbiotic relationship between the slave trade and the direct New World trade was quickly restored.

If the slave trade was intimately intertwined with Europe's New World trade, it was equally embroiled in the Asia trade. When the slave ship Diligent left France for the West African coast in 1731, over half its cargo consisted of cowry shells and various types of Indian textiles. The cowry shells, which served as the major currency along the West African coast, came from the Maldive Islands, near India. Company of the Indies ships returning from India and China would stop in the Maldive Islands and purchase cowry shells, which they used as packing material to cushion crates of porcelain and other goods much as Styrofoam popcorn is used today. The cowries also served as ballast to keep the ship steady. Because the porcelain, tea, spices and textiles of Asia were of higher value than the European trade goods that the ships brought from France, returning ships had a great deal of empty space in their holds that was filled with cowry shells. Once back in France, the cowries were removed and repacked in barrels to be shipped to West Africa.

Slave traders were aware that their financial success depended upon carrying trade goods that were in demand in Africa. Since cowry shells were the major currency on the West African coast, they were in demand. Textiles, however, were more risky because fashions along the West African coast could change from year to year. Traders thus carried a variety of European and Indian textiles in order to spread the risk. The Diligent, for example, carried several types of Indian textiles: limancas (a fine striped cloth from the Coromandel Coast), salempouri blue (a cotton cloth of varying quality) and "Indian cloth," a general term for printed calicoes, cottons and chintzes.

The demise of the French East India Company in 1706, later resurrected as the Company of the Indies, caused a problem for French slave traders. It was impossible for the firm remain competitive in the slave trade without ready access to cowry shells and Indian textiles. So vital was the Asian trade to the slave trade that a consortium of merchants raised more than a million livres to start a company to replace the defunct French East India Company. In requesting authorization from the French Council of Commerce, the merchants cited the difficulties in obtaining the products of Asia so vital for the slave trade. The slave trade could not function successfully, they argued, unless they had direct access to cowry shells and Indian textiles.

The government denied the merchants' request and instead formed the Company of the Indies, which was given a monopoly over both the Asia trade and the slave trade. The integration of France's Asia trade with the slave trade was complete. Ships returning from Asia unloaded their textiles and cowry shells at the company port of Lorient on the Brittany Coast of France, and the goods were immediately reloaded onto company slave ships bound for Africa. The Asia trade supplied necessary trade goods for the slave ships, and the slave ships provided a steady market for the Asian products. The only flaw in the system was that it failed to integrate itself into the direct trade with the New World. That flaw proved fatal.

After the Company of the Indies abandoned its monopoly on the slave trade in 1725, a new system emerged that endured for decades. The company brought Indian textiles and cowry shells to its home port in Lorient, where it sold them to private slave traders who exchanged them for slaves in Africa. The slaves were then carried to the New World and exchanged for sugar. Roughly half of that sugar was carried back to France on slave ships, and the other half was carried by direct traders. The triangular slave trade, the Asia trade and the direct trade to the New World formed an integrated system. No segment of it could survive without the others. It is a tragic irony that the archaic institution of slavery played such a crucial role in the 18th century development of the modern world economy.

(1) The only historian to mention this fact, as far as I can determine, is Jean Meyer in L'Armement Nantais dans la Deuxieme Moitie du XVIIIe Siecle (Paris, 1969), p. 228.

Robert Harms is professor of history at Yale and chair of the Council on African Studies. His most recent book is The Diligent: A Voyage Through the Worlds of the Slave Trade.