Clouds of locusts are ruining crops and livelihoods in Ethiopia, Somalia and Kenya. “The UN's Food and Agriculture Organization (FAO) estimated one swarm in Kenya at around 2,400 square kilometres (about 930 square miles) - an area almost the size of Moscow - meaning it could contain up to 200 billion locusts,” reports Al Jazeera, adding that experts worry about food security in a region where 19 million already are in acute hunger. Extreme weather, droughts followed by heavy rains and flooding, spike locust breeding. The UN agency recommends aerial pesticide applications, costing $70 million. “If unchecked, locust numbers could increase 500 times by June, spreading to Uganda and South Sudan, becoming a plague that will devastate crops and pasture in a region which is already one of the poorest and most vulnerable in the world.” – YaleGlobal

Read the article from Al Jazeera about the infestation of desert locusts in East Africa.

Read more about Desert Locusts from the UN Food and Agriculture Organization.

Also read “The Desert Locust in Africa and Western Asia: Complexities of War, Politics, Perilous Terrain, and Development” from the University of Minnesota. 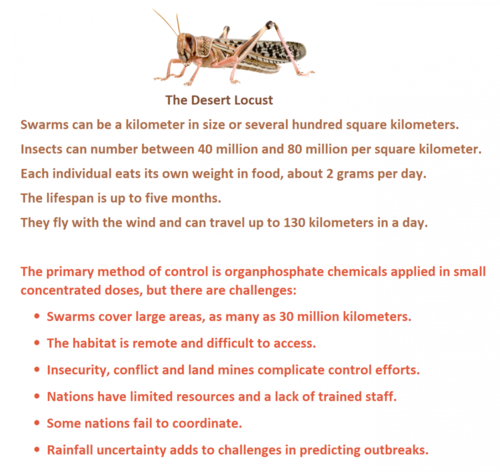 Insecticide! (An Ecological Disaster That Will Affect Us All)

Grubs Up! Scientists Keen to Get Us Eating Bugs