The East Asia Summit: More Discord than Accord

Some hoped that the recent East Asian Summit (EAS)—which included China, India, Japan, South Korea, Australia and New Zealand, and the Association of Southeast Asian Nations (ASEAN)—would be the first step towards building an East Asian Community. Instead, EAS brought historical rivalries and conflicting geopolitical interests into sharp relief. In this article, Mohan Malik, a professor at the Asia-Pacfic Center for Security Studies in Honolulu, discusses the lengthy process of forming the EAS and the competing strategic interests of its members. Hindered by disagreements about membership categories, more than a decade passed between the original proposal and this year’s summit. Current members include the nations of ASEAN Plus Three (China, Japan, and South Korea) as well as India, Australia, and New Zealand. But a major debate ensued when China, wary of both India and Japan, insisted on differentiating a core group, including the original APT nations, from a peripheral group, including the three new members. Yet even China was disappointed with the final decision: ASEAN will remain the hub of the EAS by holding all future summits alongside the ASEAN Summit and within Southeast Asian countries. While such squabbles complicate the summit itself, there remains little hope that the EAS will develop into an East Asian Community. “In the absence of a thaw in Sino-Japanese and Sino-Indian relations or great power cooperation the EAC is unlikely to take off,” concludes Malik, “because multilateralism is a multi-player game.” – YaleGlobal

The East Asia Summit: More Discord than Accord

Is the new East Asian Community (EAC) the first step towards a united region, or an irritant to old rivalries?
Mohan Malik
Tuesday, December 20, 2005 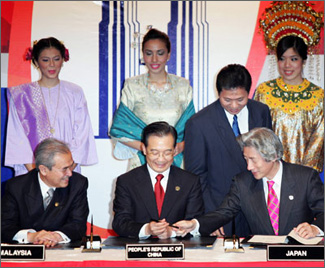 You may borrow my pen, but not influence: Japanese Prime Minister Junichiro Koizumi caused hilarity by borrowing Chinese Premier Wen Jiabao's pen, but it did not hide serious tension under the surface. (Photo: Reuters)

HONOLULU: Optimists see the East Asian Summit as the first step toward establishing an East Asian Community (EAC) along the lines of the European Community. However, competing geopolitical interests and historic suspicion make the goal unrealistic for the foreseeable future. Instead of creating a common bond, the first summit may have intensified old strategic rivalries and forced smaller Asian nations to choose sides.

The long-awaited summit (EAS) held in mid-December brought together China and India with Japan, South Korea, Australia and New Zealand, and the Association of Southeast Asian Nations (ASEAN). With several rising and contending powers, the Asia of the 21st century resembles Europe of the early 20th century, and for now, any Asian free-trade zone to rival Europe seems farfetched. 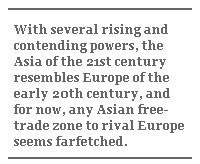 Despite the ongoing Sino-Japanese feud, Sino-Indian rivalry, discord over membership, and wariness about China’s emerging power, leaders did agree to hold the EAS annually with the ASEAN. But challenges remain: On the eve of the summit, China proposed dividing EAS members into core and secondary categories, and Chinese and Korean leaders refused to hold bilateral or trilateral talks with Japanese counterparts. China’s stance provides insights into Beijing’s insecurities regarding the momentum for a broader East Asian Community shifting power alignments within Asia.

Former Malaysian Prime Minister Mahathir Mohamad first proposed the summit as the East Asian Economic Caucus in 1991. But the original proposal, with its narrow membership definitions, floundered mainly due to opposition from the US, which was being excluded from what was called a caucus without Caucasians.

Almost a decade later, Mahathir’s successor, Abdullah Badawi, resurrected the idea of an East Asian Community at the 2004 ASEAN Plus Three (China, Japan and South Korea) meeting, and immediately won backing from China’s Premier Wen Jiabao. Perceiving declining US power due to the preoccupation with the War on Terrorism, an assertive China saw an opportunity to steer East Asian multilateralism along the lines of the Shanghai Cooperation Organization (SCO), to serve Beijing’s strategic goals and further weaken US influence in East Asia. However, Beijing’s enthusiasm alerted those countries that remain wary of becoming divided into Chinese and American blocs in East Asia or establishing an East Asia Co-prosperity Sphere under China’s leadership. This alarm prompted a campaign to include India, Australia and New Zealand and to ensure that ASEAN remained central to any future East Asian Community.

Membership remained a contentious issue well into 2005. With the exception of Kuala Lumpur, Southeast Asian countries supported India’s participation in the EAS, seeing it as a useful counterweight to China’s growing power and backed Australia’s participation provided that Canberra acceded to the ASEAN Treaty of Amity and Cooperation, which it did.

Failing to exclude India, Australia and New Zealand from the EAS, the Chinese Foreign Ministry proposed on the eve of the summit that the existing ASEAN Plus Three (APT), and not the new 16-member East Asia Summit, control the formation of any Asian community-building exercise. In other words, China insisted that EAC formation remain the responsibility of the core group, or APT. A proposal to divide EAS into two blocs - the core states with China as the dominant APT player, and the peripheral states with India, Australia and New Zealand, “outsiders” according to a recent People’s Daily editorial - led to a major rift.

A People’s Daily commentary listed reasons for the Chinese proposal. The commentary criticized Japan for dragging countries outside the region into the Community to serve as a counterbalance to China and rejected any plans to “dish out the ‘human rights’ issue…to build up US, Japan-centered western dominance…in an attempt to…weaken Chinese influence in East Asia.” China regards Japan and India with substantial antipathy, and not just because the two Asian giants are China's principal peer competitors. China-Japan relations, always prickly, have lately worsened due to Beijing’s opposition to a permanent UN Security Council seat for Japan and rival claims to petroleum deposits and islands in the East China Sea, not to mention Prime Minister Koizumi’s visits to the Yasukuni Shrine commemorating Japan’s war dead.

Beijing remains leery of India’s power pretensions and attempts to extend influence in China’s backyard, regarding New Delhi’s “Look East” policy as part of a wider “congage China” strategy unveiled by the Washington-Tokyo-New Delhi axis. Beijing seeks to confine India to the periphery of a future East Asia Community. The People’s Daily commentator reacted sharply to India’s proposal for an Asian Economic Community: “India’s proposal is not warmly responded as each country has its own considerations.” Apparently, China’s considerations are primarily geo-strategic in nature. Beijing fears that India’s participation would shift the balance of power and make the EAC less susceptible to domination by China. China’s proposal for a two-tiered EAS structure found some support from South Korea, Burma, Thailand, and more importantly, host country Malaysia, albeit for varying reasons.

In the end, China won a partial victory with Malaysian Prime Minister Abdullah Badawi’s announcement that APT, which originally proposed the idea, would be “a vehicle for realizing the dreams of forming the East Asian Community.” However, the support came with a caveat: ASEAN spurned Beijing’s offer to host the second summit, and decided that the EAS will be held annually with the ASEAN Summit in Southeast Asian countries only. Thus, ASEAN will be the hub of the EAS and the key driver within the APT.

The reaction was mixed: An Indian diplomat expressed disappointment over the decision to entrench the ASEAN+3+3 framework: “To state that ASEAN is in the driver’s seat, the passengers have a right to know where they are going.” With Australia relegated to the outer circle, Prime Minster John Howard downplayed the summit’s significance relative to the APEC. And Japan expressed its preference that newcomers India, Australia and New Zealand be more than mere passengers on the road to an East Asian Community.

Realizing that its original goal of establishing an East Asian version of SCO to counter Washington was a non-starter, China quickly lost enthusiasm for the new grouping. As a distant hegemon, the US remains the balancer of choice for countries on China’s periphery. Of the 16 EAS members, Japan, Thailand, the Philippines, Australia and South Korea are military allies of the US, while New Zealand, Singapore, Indonesia, Vietnam, and India are hedgers more concerned about China than the US. So on the last day of the summit, the Chinese premier and diplomats suggested that anyone with interests in the Pacific - Russia, perhaps, or even the United States - could eventually take part, a move that would make EAC indistinguishable from the ASEAN Regional Forum or the APEC.

In the absence of a thaw in Sino-Japanese and Sino-Indian relations or great power cooperation, the EAC is unlikely to take off because multilateralism is a multi-player game. If anything, the first EAS may well have had the opposite effect, intensifying old rivalries. If such rivalry continues, there is every risk that community building exercise would be fatally compromised. At best, the EAS will be just another “talk shop” like the APEC or the ARF where leaders meet, declarations are made, but little community building is achieved.

Mohan Malik is professor at the Asia-Pacific Center for Security Studies in Honolulu. The views expressed here are his own and do not reflect the policy or position of the center or the US Department of Defense.