In 1910, Japan invaded Korea, colonizing the country for 35 years and attempting to obliterate its culture. Nationalism, fed by historic grievances, lingers today. In the second part of this three-part series, Peter Beck of the International Crisis Group analyzes the troubled relationship between Japan and South Korea, who are major trading partners, yet continue to clash over territorial boundaries as well as the name of the surrounding waters – Sea of Japan or East Sea. Two barren volcanic rocks – known as Dokdo in Korean and Takeshima in Japanese – symbolize the ongoing dispute. Both sides claim to want potential fish and energy sources in the waters surrounding the rocks, but those concerns mask political and nationalistic ambitions emerging in both countries. Beck recommends that both countries separate territorial disputes from diplomatic contacts, avoid all military exercises in the area, and reach an agreement on allowable catches for Japanese and Korean fishermen in the waters surrounding the small rock islands. Both countries have an opportunity to demonstrate leadership, preserving stability for the two democracies and the entire region. – YaleGlobal 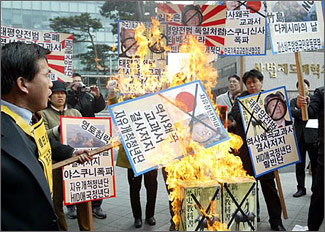 Rocky relations: South Korean protesters vent their anger over Japanese claim to pieces of rocks in the sea

SEOUL: In late April Japan and South Korea came within hours of a potentially deadly clash over a few seemingly meaningless rocks in the middle of the waters separating the two countries. The crisis was averted after they decided to talk in May. But the question remains: With billions of dollars in trade and investment, not to mention regional peace on the line, why were Tokyo and Seoul willing to risk everything over those some rocks or fish in the surrounding water? The answer lies in the volatile mixture of historical animosity, national pride and a battle over resources. Given the lack of statesmanship exhibited so far by both governments, it would be optimistic to expect the conflict to be resolved soon. 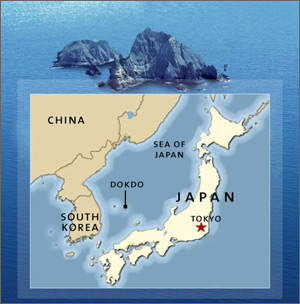 Rocks of dispute: The island of Dokdo, below, a map of the region. Enlarged image

The ostensible cause of the latest clash over the two barren rocks, known as Dokdo in Korean and Takeshima in Japanese, was the trivial naming of nearby seabed features. Tokyo – determined to challenge Seoul’s proposal of Korean names at an international conference this summer, but lacking scientific data – prepared to send two of its Coast Guard vessels into Seoul’s self-declared exclusive economic zone. The vice foreign ministers from the two sides managed to defuse the crisis on 22 April by agreeing to defer Seoul’s submission of names and call off Tokyo’s scientific probes. The Chinese media quickly declared Japan the winner in the standoff, and Korea’s leading daily, “Chosun Ilbo,” roundly criticized the Roh administration both in word and political cartoon for caving in to Japan’s demand.

Most press reports suggest that at stake is not the rocks themselves but control over “rich” fishing grounds and natural gas deposits. However, such claims ring hollow on both counts. These waters already suffer from over-fishing, and fisheries represent little more than a rounding error in either country’s gross domestic product. Moreover, the presence of natural gas has not been proven, and many energy specialists are skeptical that significant deposits exist.

For South Korea, the real issue is national pride. To Koreans, North and South, left and right, Dokdo is one of the few issues that all can agree on. The islets are intertwined with notions of national sovereignty and the Koreans’ loss of it and the islands 100 years ago to Japan. Japan asserted its legal claim then, even though, based on the International Crisis Group’s review of historical records, Korea had a stronger claim. One would be hard pressed to find a single Korean over the age of five willing to admit that control of Dokdo does not matter. When I visited neighboring Ulleung Island’s Dokdo Museum last fall for our report on the undercurrents of conflict in the region, the docent spoke proudly of visitors doubling since the then-Japanese ambassador to Seoul declared in spring 2005 that the rocks belonged to Japan.

The Japanese press and, according to a leaked memo, the Ministry of Foreign Affairs assume that President Roh Moo-hyun has adopted a hard-nosed approach to win support from the Korean public. But the president has a low approval rating, and the latest clash will likely do little or nothing to budge that. Moreover, wagging the Samurai will do nothing to improve the ruling party’s prospects in the upcoming local elections in May or presidential elections in 2007. The distraction value is ephemeral, so the elections will turn on other issues.

Japanese leaders know that the chances of gaining control of the contested islets are virtually nil – the South has controlled them for more than 50 years and will never concede to having the International Court of Justice taking up the dispute. Instead, the dispute must be seen in the context of Japan’s territorial disputes with Russia over the Kuriles/Northern Territories and China over Senkaku/Daioyu-tao. Unlike Dokdo, the Northern Territories were clearly part of Japan, and Senkaku actually has sizable natural gas fields. Failure to contest Dokdo would weaken Japan’s other territorial claims. National pride is on the rise in Japan, but Japanese do not feel nearly as strongly about the dispute. In fact, the South Korean government’s overreaction to the passage of a local Japanese government’s bill proclaiming “Takeshima Day” last spring brought the issue to the attention of many Japanese for the first time.

Rising nationalism in Northeast Asia, stoked by renewed controversy over Koizumi visiting the Yasukuni war shrine and Japanese textbooks whitewashing World War II atrocities, partially explains the intensification of longstanding but dormant territorial disputes. But the real problem lies with the lack of statesmanship shown by leaders in Tokyo and Seoul when both have ample reason to appear statesmanlike. Japan is arguably the only country in the world embroiled in territorial disputes with all of its neighbors. With so much dissention and mistrust, how can Tokyo ever hope to gain a seat on the UN Security Council? By the same token, President Roh has refused meaningful talks with Prime Minister Koizumi for more than six months. Seoul’s overreaction and uncompromising stance do not exactly cast its UN secretary general candidate, Foreign Minister Ban Ki-moon, in favorable light.

With Japan’s history as a former oppressor of its neighbors, it is up to Japanese leaders to show greater forbearance and generosity. Insensitive public statements by officials in Tokyo, the former colonial master, only rub salt in old wounds. At the same time, Seoul should not obsess over the past to the extent that President Roh has made correcting the past a centerpiece of his presidency. Ironically, a pubic opinion survey conducted by the liberal “Hankyoreh Newspaper” in summer 2005 showed righting past wrongs to be the lowest national priority. At the moment, the three leading candidates to succeed Roh would likely take a more moderate approach toward their neighbor. Unfortunately, the same cannot be said of Prime Minister Koizumi’s leading two potential heirs.

The US, as ally of both countries, was a logical choice to take leadership in searching for solutions. But the US bears some responsibility for the problems in Asia after World War II, starting with the 1951 San Francisco Peace Treaty, which left territorial disputes unresolved, and by not fostering a regional security structure like NATO to bind countries together. Moreover, President Bush’s legacy rides on the outcome in Iraq, and the ongoing carnage there precludes the administration from devoting attention and dwindling political capital to a couple of barren rocks.

The standoff is far from hopeless if the right leaders can step forward. We identified several strategies for overcoming the territorial clash between Japan and Korea in the International Crisis Report issued in December 2005: First, territorial disputes must be de-linked from diplomatic contacts. Meetings at all levels, from heads of state on down, should not be held hostage to bilateral disputes. In fact, the disputes are all the more reason to have meetings. Second, both sides should refrain from unilateral military exercises, even if “scientific” in nature. Third, the two sides should conclude an agreement on allowable catches by Japanese and Korean boats in the median fishing zone located around the islets. A fishing dispute is the most likely source of a future flare-up in tensions. Korea and Japan’s leaders must do more to prevent a fish fight from turning into a real conflict.

Peter Beck is the Northeast Asia project director for the International Crisis Group and an adjunct faculty member at Ewha Woman’s University and Georgetown University. The project’s report, “The Undercurrents of Conflict in North East Asia” can be downloaded at www.crisisgroup.org.