Economic crisis can be a time of opportunity, particularly if political leaders are savvy enough to use the down period to introduce needed reforms. Zhiwu Chen, finance professor with the Yale School Management, offers such a blueprint for China. An economic stimulus package announced this week by the Chinese government, aimed at building infrastructure, is only a first step. Chen also urges the government to boost domestic consumption and privatization, thus allowing Chinese citizens to enjoy the nation’s wealth effect. Chen notes that “the ongoing global crisis may provide new impetus for reform,” promoting land-use rights, subsidizing education as well as devising a system to distribute shares in the nation’s wealth to citizens. Meanwhile, recent decline in prices for bonds and commodities allows the nation to reallocate its investment portfolio away from US Treasuries toward investments that target long-term growth. – YaleGlobal 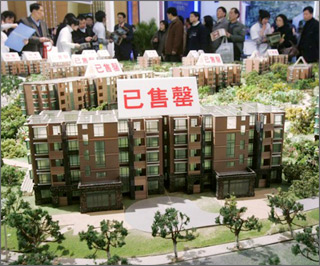 Chance for a home run: Beijing could take advantage of the crisis to encourage private ownership and enterprise

NEW HAVEN: It was inevitable that given its high level of dependence on exports, China’s real economy would not escape the impact of the global slowdown. Indeed many manufacturing firms are shutting down, creating a serious employment challenge. But the crisis also opens up new opportunities that could enable China to emerge stronger from the crisis.

After 30 years of fast growth, China’s investment-driven and export-oriented development model, with exports accounting for 40 percent of GDP, had become increasingly difficult to sustain. Thus, even before the crisis deepened this fall, China looked to transform its growth model into one driven more by domestic consumption. China faces perhaps the biggest test since reforms began in 1978.

Now the crisis could provide the needed pressure for China to adopt fundamental reforms, otherwise politically infeasible, and get the economy on a healthy track for the long term. With the right policy steps, China can position itself to come out of this as a winner. 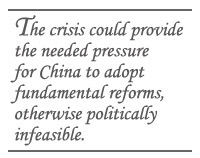 A couple of immediate positives result from the financial crisis: First, prices of energy and most resources have been cut in half or more over the past three months. The large price cuts simply make the next round of China’s growth more affordable.

Second, China has about $2 trillion of foreign exchange reserves, of which roughly $600 billion is in US Treasuries, and about $400 billion in mortgage-backed securities and agency bonds that are now directly or indirectly back by the US government. These holdings have overall gained in value as a result of the flight to quality by investors of all types.

In contrast, other investment markets from equity to municipal bonds, corporate bonds, oil, timber, copper and even gold have all declined in price. Thus, the crisis has offered China a rare opportunity to re-allocate its reserves away from US Treasuries and into depressed securities and assets. According to a Chinese think-tank estimate, the most liquidity in foreign exchange reserves that China would need under a worst-case homegrown financial-crisis scenario is $700 billion or less. The rest of the $2 trillion reserves can be invested in equity, resources and other less liquid assets around the world, especially in resource-rich countries. Such a systematic portfolio re-allocation will help position China for long-term growth.

China’s GDP growth slowed to 9 percent during the third quarter. The hit on China from the global crisis is expected to be the worst during the first half of 2009. Its growth rate may even decline to 6 percent by mid-2009, before the pending economic stimulus efforts kick in. But, China has many policy options to rescue its economy. 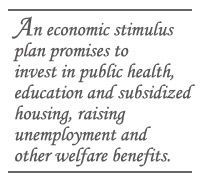 The Chinese government just announced a $586 billion stimulus plan for the next two years. The plan has 10 spending items, including construction/expansion projects of railways (more than $200 billion), highways, airports, city subways and nuclear power plants. It promises to invest more in the public health care system, education and subsidized housing and raise unemployment and other welfare benefits. Value-added taxes will be phased out, replaced by corporate income taxes more quickly than scheduled, all helping to smooth the impact of the crisis on China’s real economy.

This and other recent policy steps by China are just a start. If needed, China can further resort to its large fiscal surplus, unused debt capacity and even state-owned assets. For the first half of 2008, the national fiscal surplus is RMB 1.2 trillion, or $179 billion, equal to 4.2 percent of China’s GDP. Total national debt outstanding is about RMB 5 trillion, or $746 billion, 18 percent of GDP. On a relative scale, this is far below the typical national debt-to-GDP ratio of 60+ percent for developed countries. Therefore, China can do what it did during the 1997-1998 Asian financial crisis: raise capital through government bonds and invest in infrastructure and industrial projects.

However, while government investments can stimulate growth in the short term, its magic will be more limited this time than during the Asian financial crisis. After the last decade of high growth, China now has decent infrastructure and a serious overcapacity problem in industrial production. Its current investment-to-GDP ratio is already over 50 percent. 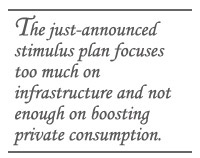 For this reason, the just-announced stimulus plan focuses too much on infrastructure and not enough on boosting private consumption. Infrastructure investments will not create as many jobs in the long term. As a result, the multiplier effect from this plan will be lower than one may expect. China must look for other ways to stimulate domestic consumption, instead of relying on the tried-and-true trick of government investment.

For example, policymakers have debated sending tax rebates to mid- and low-income families, but resist due to operational unreadiness at relevant government agencies. Clearly, such rebates would produce faster and targeted results. Educational subsidies to low-income students should also be among future policy options, to reduce private saving pressure. To help transform its economic model, China’s stimulus efforts should target private consumption.

Still, such policy steps can only provide a short-term boost. More fundamentally, unless state- and collective-owned land and state assets are privatized, it’s hard to see how stimulus efforts can transform the investment- and export-oriented economic structure.

China’s private consumption has failed to grow, but not because Chinese consumers don’t like spending. Rather, it’s because most don’t own property and, even though both the economy and asset values have been growing fast, most households don’t feel any wealth effect. According to my compilation of official statistics, the Chinese government owns about three quarters of the country’s productive wealth. For most consumers, wages are their only source of income. And this single income source has grown at a pace far lower than GDP growth rate. Without more and spreading private ownership of assets, there’s not enough wealth effect to boost consumption and private savings pressure will necessarily remain high.

For the past 30 years, as the economy continued to benefit from globalization and stayed on the high-growth path, there was insufficient pressure for China to undertake privatization reforms by equally distributing the remaining state assets to its 1.3 billion citizens. Yes, privatization has taken place in China, but through selling shares of state-owned enterprises at a price. This means relatively few could buy and all proceeds went into the Ministry of Finance. Therefore, previous methods of privatization had little, if any, effect on domestic consumption.

This explains why China has had a strong desire to reduce its dependence on both investment and export for more than a decade, but only managed to see this dependence rise. 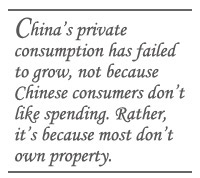 The ongoing global crisis may provide new impetus for reform. In late October, the central government announced a land-reform policy to allow peasants to trade or mortgage land-use rights. In particular, the government will make efforts to organize land-use right markets and facilitate trading in such rights. While not outright land privatization, this reform is a major step in the right direction that can make peasants wealthier and unleash new consumption demand in the countryside.

Another possibility is putting the remaining state assets into national wealth funds and distributing the fund shares equally among Chinese citizens. After all, state assets belong to the people. Returning the ownership rights of these assets to the citizens at no cost is perfectly consistent with the very logic of state ownership. If this happens, the financial crisis– induced reforms could position China for another period of high growth. In this sense, the crisis can turn out to be a positive opportunity for China.

Zhiwu Chen is Professor of Finance at the School of Management at Yale University.