Substantial numbers of financiers and politicians are dismiss worries over climate change. Yet, “Top economists say the economic effects of climate change are just starting to be felt – and they're likely to start snowballing,” reports Courtenay Brown for Axios, who goes to explain how increasing wildfires, floods and natural disasters can disrupt the electrical grid, electronic payment and insurance systems. The US Federal Reserve has been slow compared with other central banks in addressing the financial challenge of climate change. Economists presented warnings at the Federal Reserve’s first climate change research conference: Global GDP per capita could fall by 7 percent before 2100, while meeting the terms of the Paris Climate Accord could limit the loss to 1 percent; worker productivity is expected to decline. The International Monetary Fund suggests that mitigation is essential in preparing for climate change and that central banks and the financial industry have a role. – YaleGlobal 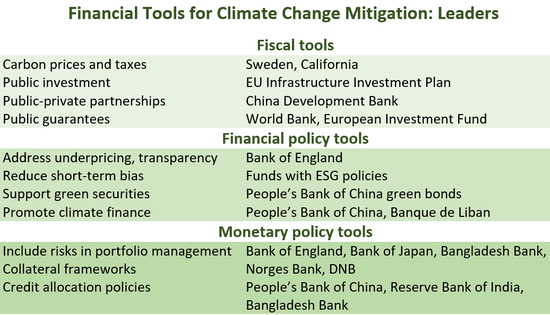 Read the article from Axios about the US Federal Reserve considering its role in preparing for climate change.

Courtenay Brown is a Markets Reporter at Axios.

The International Monetary Fund urges the financial industry and central banks to prepare for climate change, and observations from the working paper on “Macroeconomic and Financial Policies for Climate Change Mitigation” follow:

The broad consensus in the literature is that expected damages caused by unmitigated climate change will be high and the probability of catastrophic tail-risk events is nonnegligible.

The appropriate response to climate change depends on whether a maximization or risk management approach is taken.

The lack of accounting for co-benefits of mitigation also implies that countries’ existing commitments may not go far enough.

The transition requires changes in relative prices as well as large scale public and private investments.

A set of market and governance failures prevent the required transition from taking place in time via the market.

Fiscal policy has a natural role to play in achieving climate mitigation, and a wide range of fiscal policy tools are available.

Climate change mitigation can generate inequality within and between countries.

Climate mitigation policies could increase growth and development, and reduce poverty, if well designed and implemented.

The stakes of climate change mitigation are existential.

Rulebook for a Changing Climate

All IP rights, including copyrights, patents, trade marks, and trade secrets, in the Site and its content are owned by AXIOS Media or AXIOS Media's suppliers.