Educating for the 21st Century – Part I

Two Yale students recently traveled to India and China, and in this series they write about how, through education, the two emerging countries are preparing for the 21st century. In the first part, Sara Schlemm explores why China seeks to raise the profile of its institutions by opening doors to more international students who wish to study in China. For years, China has seen many of its brightest young minds pursue their education elsewhere, often at US universities. Traditionally segregated, Chinese universities have announced new initiatives that welcome foreign students. The move is not without precedent. China sponsored an influx of students from other Socialist and developing nations, especially Africa, throughout the 1970s and 1980s. China has also positioned itself as a regional educational hub, attracting students from other Asian nations, especially those who hope to perfect Chinese language skills. But China’s increasing economic ties to the West have prompted the universities to transform themselves into global educational brands, courting more international students and forming partnerships with premier universities around the world. Such initiatives reflect China’s drive to establish a cultural identity befitting its increasing relevance on the world stage. – Yale Global

Educating for the 21st Century – Part I 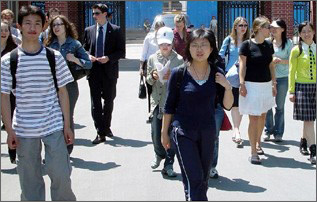 NEW HAVEN: The opening of China launched in the late 1980s has crossed another threshold. Under an agreement with Yale University, Peking University in Beijing will receive Yale students to study with Chinese students in specifically designed classes and dormitories. The initiative is one of the first opportunities for American students to live and study with native students at a Chinese university. Until now, international students were housed and educated separately on Chinese campuses, so for the first time, Chinese and American students will have close and daily interaction on a Chinese campus.

Of course, hundreds of thousands of Chinese students have studied abroad, but for political reasons Chinese institutions segregate their students. A more confident China, seeking to claim its place in the education universe, has taken the first step to more fully open its universities and student bodies to foreigners, especially from Western countries. This opening may mark the changing direction of the country’s education policy – from offering socialist education to students from developing countries to teaching language skills to partners in developed countries.

As China expands economic, political and cultural reach across the globe, seeking out new partners and allies, its efforts to participate in the education sector, such as the Yale-Peking Program, have also increased. International students, who pay higher tuition, live in more upscale dormitories and face lower academic requirements for admission than their Chinese counterparts, have been a public relations asset for China. The students also bring in some hard currency income. Seeking to make its universities among the best in the world, China may become more active in attracting the world's best students. As the second-largest source of international students in the US, China is accustomed to seeing some of its best young minds flow out of the country, seeking better opportunities elsewhere. With more career opportunities in China today, its universities may see a trend in the opposite direction.

Indeed, China’s tradition of modern higher education - which came to replace the centuries’ old jinshi national examination system, based on classical literary learning - began when schools had to instruct students to attend universities abroad. The country’s oldest such institution, now Peking University, began as a language school, while Tsinghua, also in Beijing, had similar roots.

More recently, China sought to attract foreign students from fellow Socialist countries and from developing nations, especially those from Africa. During the 1970’s and 1980’s, China launched a program to sponsor African students to study at its universities. The initiative was not without controversy. In 1988, riots broke out at Hehai University in Nanjing when Chinese women accompanied African male students to a dance, sparking an uproar amongst the student and local populations. The Nanjing Riots were the last in a series of confrontations prompted by the presence of African students in China during the 1980’s. The racial tensions were diffused by frantic diplomatic talks between Beijing and the participating African nations, and the conflict undermined Beijing’s international outreach attempts.

But even today, China widely publicizes its educational partnerships with Africa as evidence of its commitment to international development. Xinhua News Agency, which produces articles for the English-language People’s Daily, has reported extensively on these efforts, including a boost to 10,000 Chinese government scholarships and a particular focus on its donations to UNESCO’s Africa department.

This focus on cooperation with developing countries, however, is fading in importance as China's economic links with the West expand. Just as Western companies looking to establish businesses in China must set up partnership ventures with Chinese firms, international collaboration is becoming an increasingly prominent facet of Chinese education. The Yale-Peking University partnership is historic in that it is an English language, undergraduate opportunity, but similar projects are more common at the graduate level. Optimize, a business strategy magazine published in New York, profiled the China-Europe International Business School in Shanghai: 20% of enrolled students are from outside China, and the school emphasizes useful skills for multinational corporations that hope to establish Chinese ventures.

China is trying to gain from partnering with top educational institutions around the world, much like Chinese corporations have been doing by entering into joint ventures: Universities seek to learn from their international counterparts to compete more effectively in the long run.

Chinese universities seek to attract international students, in part, because of the opportunity to turn their names, already well known nationally, into global brands in the manner of US Ivy League schools like Harvard and Yale.

Foreign students pay higher tuition than Chinese students. At Tsinghua, for example, international students must pay between 20,000 (US$2480) and 42,000 yuan (US$5200) in tuition, depending on their choice of program, while Chinese students pay approximately 5,000 yuan (US$620). Foreign students must either learn or improve their proficiency in Chinese, often in specially designed language schools within the university. In addition, the foreign students live together in more spacious and expensive housing. Such separate housing could be a concession to the lifestyles and preferences of international students or the administration’s attempt to maximize earnings. Accompanying the higher costs are services intended to reassure international students about the safety and desirability of a Chinese education, including health insurance as well as university assistance in dealing with immigration authorities and the local police.

Students from other Asian countries demonstrate growing interest in attending Chinese universities. The potential of learning or perfecting Chinese language skills is a particular draw for students, and in response, universities have made language instruction the focal point of their international student initiatives. For example, Shanghai Jiao Tong University (SJTU), one of China’s most selective and prestigious institutions, has a special School of International Education that stresses Chinese language and linguistics.

But do international students themselves add to the academic caliber of Chinese universities? At the moment, international students at top Chinese universities are generally less academically distinguished than their Chinese counterparts. Foreign students are not required to undertake the rigorous Gao Kao examination, a multi-subject test which is the main determining factor for university admission and required of all Chinese university entrants. Instead, the foreign students simply must prove their proficiency at Chinese language through the GSK exam, or the Mandarin equivalent of the TOEFL, the Test of English as a Foreign Language, a requirement for admission into colleges and universities that instruct in English.

So elite universities undoubtedly turn away brilliant Chinese candidates and accept students who focus more on language instruction than other strategic disciplines. Unquestionably, the universities themselves are seeking to make China an attractive destination for foreign students, and for good reason. Among all top universities of the world, the mere presence of international students represents prestige. Likewise, the representation of students from other Asian countries supports China's ambitions to become a "regional educational hub." Writers and editors of The Yale Globalist – an undergraduate monthly magazine – recently traveled to China to research its educational system, and many of the international students they spoke with were either of Chinese heritage or from elsewhere in Asia. The students explained that their decision to study in China was prompted by an expectation of future opportunities. After all, China is on the road to becoming the largest economy in the world.

For 150 years China has dispatched students around the globe to pursue their education, and such education has influenced the nation’s domestic political and social environment. Yung Wing was the first Chinese student to attend Yale, and he graduated in 1854. His subsequent return to China led high officials to pursue military re-armament with Western technology. Some decades later, several revolutionary figures, like the writer Lu Xun, became radicalized after studying in Japan. Some international students may seek to stay in China after graduation, and their influence on politics and society remains to be seen.

Sara Schlemm is a junior majoring in History at Yale University and a student editor at YaleGlobal Online.