Civil war has divided Sri Lanka since 1983, as Liberation Tigers of Tamil Eelam fought for a separate state for Tamils, which comprise 18 percent of the country’s population. But global and regional events that conspired against the rebel cause can’t be counted on during the post-conflict phase, explains Harsh V. Pant, a lecturer in defense studies at King’s College in London. Several factors such as global post-9/11 abhorrence of terrorism, Sri Lanka’s closer ties with China and Pakistan, as well as anti-secessionist sentiments throughout the region, in India in particular, helped Sri Lankan government defeat the rebels. The end of fighting is near, yet Pant cautions that the same television and internet coverage that spurred outrage over LTTE attacks could quickly reverse public opinion if the Sri Lankan government takes a vengeful approach against the rebels. Pant urges that the government take appropriate political and socioeconomic steps on legitimate minority grievances, and concludes, “Resentment over decades of marginalization and discrimination won’t disappear anytime soon.” Ending the war gracefully, with reconciliation and restraint, could ensure peace for Sri Lanka’s future generations. – YaleGlobal 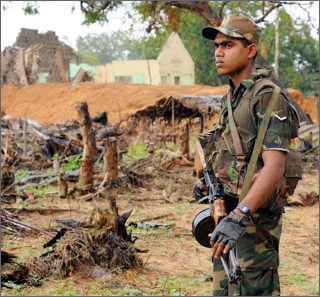 Rebellion in rubble: Sri Lankan soldier near what used to be Tamil Tiger rebel

LONDON: One of the world’s longest running insurgencies might be coming to an end with the Sri Lankan government close to overrunning the last remaining holdouts of the Tamil Tiger rebels. The same conjunction of global forces that enabled the government to turn the corner, however, could make the victory costly if it does not show restraint towards the defeated opponent. In a pointed allusion to acknowledging this reality, Sri Lanka’s main donors – the US, the EU, Japan and Norway – have called for a truce and ask the government to look beyond victory on the battlefield.

A range of factors including rising global abhorrence of political violence post-9/11, the drying up of support from the Tamil Diaspora as well as Colombo’s success in courting China and Pakistan to strengthen its military capabilities enabled the Sri Lankan government to turn the long-running battle in its favor. With the Liberation Tigers of Tamil Eelam relegated to just over 100 square miles of jungle area along the country’s northeastern coast, the Sri Lankan military hopes that the next few weeks mark the demise of the LTTE. With this in mind, the Sri Lankan government has rejected the latest truce offering of the Tamil separatists. 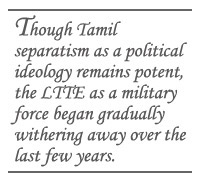 Though Tamil separatism as a political ideology remains potent, the LTTE as a military force began gradually withering away over the last few years. The LTTE have fought since 1983 to create an independent state for Sri Lanka’s minority Tamils, who constitute 18 percent of the island nation’s population of 21 million, after decades of marginalization by governments dominated by the ethnic Sinhalese majority. The LTTE’s promise of a “homeland for the Tamils” spurred the Tamil Diaspora into action, and money and weapons flowing into the country enabled the Tamil Tigers to emerge as formidable opponent ready to take on the entire might of the Sri Lankan state. The Tamil expatriate community has been a strong opponent of the Sri Lankan state ever since the mass exodus of the Tamils in the aftermath of the 1983 Colombo riots. At the global level, 37 states declared the LTTE a terrorist organization, and in a political environment shaped by September 11, 2001, there was little strategic space left for the Tigers to maneuver. Global crackdown on terror networks and their funding had a decisive impact on Tamil Tiger operations.

After losing support in India, LTTE started courting the global Sri Lankan Tamil community assiduously and galvanized support for its cause in the UK, France, the US, Canada, Australia and the Nordic countries. The Tigers generate up to an estimated US$300 million annually in revenue from various legal and illicit fronts. But North America and Europe enacted tougher legislation and law enforcement concerning LTTE financing activities. Meanwhile, the intimidation, coercion and extortion practices of the Tigers gradually alienated large sections of the Tamil Diaspora. The LTTE’s links with other global terrorist networks also came to light in recent years, including reports that the Tigers had stolen Norwegian passports and sold them to Al Qaeda. 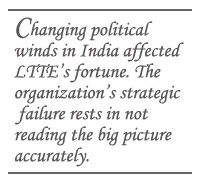 The changing political winds in India, too, affected LTTE’s fortune. The organization’s strategic failure rests in its not reading the big picture accurately. Rather than keeping India neutral, the Tigers antagonized the public opinion by assassinating former Indian Prime Minister Rajiv Gandhi in 1991. Since then, Indian support for the LTTE dwindled to a small fringe of political sympathizers in Tamil Nadu.

India, itself facing secessionist challenges, has maintained that the conflict of Sri Lanka must be resolved within the territorial integrity of the nation. Given its own sensitivities about the involvement of outside powers in myriad insurgencies faced from Kashmir to the northeast, it’s in India’s interest to support a solution within the Sri Lankan framework.

So around two years back when the Mahinda Rajapaksa regime in Colombo decided that the time for a steady military offensive had come, the LTTE was left bereft of significant outside support. The LTTE’s decision to adopt a more conventional war posture vis-à-vis the much larger Sri Lankan Army no doubt led to its military rout today.

India was constrained in providing military assistance to Colombo, with arms transfers limited to defensive use, due to the sensitivities of its Tamil population – and China and Pakistan have emerged as main arms suppliers to Sri Lanka. Colombo astutely cultivated the two nations over the last several years to keep India in check. Like most of India’s neighbors, Colombo tried to balance India’s regional predominance by courting extra-regional powers. 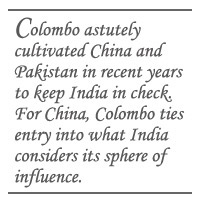 China is emerging as a major player in this context giving Sri Lanka greater strategic room to maneuver. For China, its ties with Colombo give it a foothold near crucial sea-lanes in the Indian Ocean as well as entry into what India considers its sphere of influence. China not only supplies military hardware and training, but helps Colombo in gas exploration and building a modern port in Hambantota. China’s arms transfers include fighter aircraft, armored personnel carriers, anti-aircraft guns, air surveillance radars, rocket-propelled grenade launchers and missiles, strengthening the position of the Sri Lankan Army against the first terrorist organization to boast of an Army, Navy and Air Force along with a small submarine force.

Recognizing its window of opportunity, the Sri Lankan government formally annulled a 2002 ceasefire a little more than a year ago, and the military has since advanced steadily into rebel-held territory, first sweeping the rebels away from the northwestern coast and then pushing them farther into the northeast. The Sri Lankan defense minister took his cue from the global discourse on terrorism post-9/11, warning journalists and aid groups: “You are either with us or against us.” 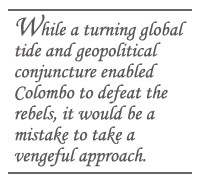 While the turning global tide and geopolitical conjuncture have enabled Colombo to defeat the military challenge, at least for now, it would be a mistake to take a vengeful approach toward the rebels and their sympathizers. The fact is that the Tamil cause still attracts the world’s sympathy. Tamils across the globe have protested against what they perceive to be Sri Lankan government’s callous treatment of civilians trapped in the fight between the Tigers and the Army. Unlike in the past, repression and brutality of the government are in full view of the world. The draining of global sympathy for terrorist strategy of the LTTE, visible on television and the internet, could be turned against the government through the same media exposure. Around 50,000 Sri Lankan Tamils marched in the streets of London earlier this year in January asking the British government to exert pressure for a ceasefire. Influential members of the Sri Lankan Tamil Diaspora already suggest that they would support the LTTE struggle until a genuine political solution is reached.

The Sri Lankan government must follow up its military victory with suitable socioeconomic and political changes that address the Tamil aspirations. Resentment over decades of marginalization and discrimination won’t disappear anytime soon. Giving a credible voice to Tamil moderates in shaping the political future of their community within the constitutional framework of Sri Lanka would end whatever little attraction the Tigers’ extremist ideology might hold. It’s up to the Sri Lankan government to secure peace for its future generations.