The End of Unipolarity

The end of the Cold War ushered in the beginning of a new era – one in which the economic, military, and political superiority of the United States seemed an undisputed fact. Gautam Adhikari reexamines the vocabulary of unquestioned – and often unquestionable – US authority. While the country's influence is undeniable, claims Adhikari, words such as "hyperpower" overstate its extent and, further, misrepresent the nature of world politics. The disparity between US capabilities and the reality of what they can achieve, as seen in places like Vietnam and Iraq, indicates that economic heft and fire power alone are insufficient tools for global change. Adhikari concludes that while the US remains an indispensable power, it needs to turn to "boardroom" diplomacy, based on consensus-building, persuasion, and cooperation in order exercise its leadership. - YaleGlobal

The End of Unipolarity

The notion of the US as solitary "hyperpower" is outmoded in today's globalized world
Gautam Adhikari
Friday, September 17, 2004 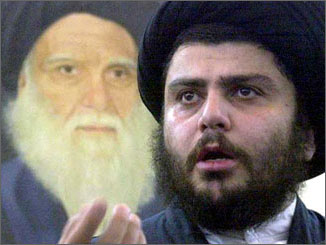 Limits of power: Even the sole superpower had to seek a deal with radical Iraqi cleric Moqtada al Sadr, whom it had vowed to arrest or kill. (Photo: Al-Ahram)

WASHINGTON, DC: With American casualties in Iraq crossing the 1000 mark while vast regions of the country descend into more destructive violence, the limits of US military power are on display. The Bush administration's scramble to strike repeated compromises in Iraq – most recently a truce with radical cleric Moqtada al Sadr – and its failure to achieve stability raise a fundamental question about limits to the power of the sole superpower. Since the end of the Cold War, the image of the US as imperial hyperpower in a unipolar world has enjoyed wide currency. In fact, it's a myth that needs re-examination to help build a more realistic understanding of world power in a globalized era.

There never was a unipolar world. The "unipolar moment" that commentators saw when the Cold War ended was pretty much that – a hallucinatory moment in history. And America as the world's first "hyperpower" was little more than French hyperbole. These terms should be retired. Other possible descriptions – such as "indispensable power" or "leader of the democratic world" – might instead be reexamined to serve as credible definitions of America's status in the world today.

There is a huge gap between America's military capacity and its actual ability to bend events according to its wish. America's installed capacity as the sole superpower at the end of the Cold War was, and remains, beyond dispute. A US$11 trillion economy that facilitates enormous technological prowess and a defense budget that exceeds the combined total of the next 25 powers should leave no doubt about the potential of the United States. Its ability, however, to unilaterally use that power – military and economic – in a unipolar world, is hampered by reality.

As Zbigniew Brzezinski put it recently, "Preponderance should not be confused with omnipotence." It has been obvious since the later stages of the Vietnam War – coinciding with the advent of televised conflict – that overwhelming firepower is not enough for victory against even seemingly feeble adversaries. Though the US death toll was significantly lower than the Vietnamese (58,000 versus 3 million), the superpower was unable to avoid defeat; media coverage of the devastating happenings eventually undermined credibility both at home and abroad. Today, in a globalized world connected by satellite television and the internet, the situation in Iraq, since the US declared the end of major combat nearly a year and a half ago, stands testimony to the failure of unilateral use of massive military might.

The war in Iraq and its chaotic aftermath highlight the basic unipolarist misconception – that sophisticated military and economic power are sufficient to subdue any adversary. As it happens, the US military, spread thinly by its global commitments, is straining to provide the men and money necessary to secure an end to the conflict. Meanwhile, should a crisis break out elsewhere, the US is no longer in a position to engage forcefully.

Take the war on terrorism – a global war, but not quite a world war in the 20th-century sense: It is far more complex than a massive deployment of men and munitions against a clearly perceived enemy-state or coalition of states. In this war, terrorism is not even the actual enemy; it is a battle tactic used by an elusive, globally dispersed, well funded enemy. This enemy also boasts the latest resources in global communications, along with financial and personnel mobility. Building a worldwide coalition of allies to fight such an enemy is not a policy choice. It is the only option in a war without conventional battlefields.

Today, the US possesses by far the largest pile of sophisticated weaponry on earth, yet its conventional military power is severely stretched in fighting one and a quarter wars in Iraq and Afghanistan. Further, its nuclear edge is tempered by the other nations – including China, India, and Russia, which have large, conventional forces and demographic depth – that have the means to respond with substantial nuclear retaliation. Even tiny North Korea, with maybe a half-dozen bombs, has become hard to tackle.

The formidable superiority of US economic power is also under threat. The rapidly ballooning expense of the Iraq war is widening already huge budget deficits. This is also intensifying a gathering US fiscal crisis of growing debt, now financed by foreign capital. Thanks to persistently large current account deficits, the US last year borrowed from abroad at an unprecedented rate of US$4 billion a day.

Asian, European, and Middle Eastern lenders are buying what they see as dollar assets. But if the dollar's value keeps declining – as it has by 30 percent over 2002 and 2003 – foreign investors will need higher returns by way of interest rates. Or, if push comes to shove in US economic prospects, they might move to another currency; the euro, for instance, holds the potential to eventually replace the dollar as the world's reserve currency. This is to say nothing of the influence that large creditor nations might have over US foreign and trade policymaking.

At the end of the Cold War, the world indeed seemed unipolar. At the time, it was assumed that the United States could act without significant cooperation or approval from other states to tackle international problems or resolve crises. In this world, no state or combination of states would be able to stop it from doing so.

Today, we are by no means in a multipolar world, one in which a coalition of major powers, acting more or less consensually, would be invariably necessary to resolve international crises. But it is clearly not a world in which the US can act unilaterally to resolve crises or wage simultaneous wars (including pre-emptive ones) without being constrained by limited resources and reach.

In that fictional world, the sole superpower might be tempted to act as if others didn't matter, while regional powers would strive toward multipolarity. But the world can be stable only to the extent that these conflicting tendencies can be balanced.

The United States today, even with its travails in Iraq, remains much more than the world's dominant power. As former secretary of state Madeline Albright once asserted, the US is still the world's "indispensable power." It can create avoidable crises by plunging into poorly planned wars of choice, as in Iraq; or it can intervene as a coalition head to create relatively benign outcomes, as in the first Gulf War. But it would be hard to resolve a major world crisis without the active help of the United States.

In other words, the US continues to occupy the world's leadership position. But it's a board chairman's job, requiring consensus-creation, persuasion, and discreet power-flexing – as well as popular acceptance. Its tasks cannot be performed by a lone maverick. If the United States wants to reassert itself as a widely accepted, and respected, leader of the democratic world, it will have to carry the world with it. Its efforts will fail if it continues to believe it can wield unilateral power indefinitely in a unipolar world.

Gautam Adhikari, a former executive editor of The Times of India, has been based in Washington, DC, for several years. He has been a Fellow at Harvard’s Shorenstein Center for Press, Politics and Public Policy; a Shapiro Fellow at George Washington University; and Visiting Fellow at the International Forum for Democratic Studies and the American Enterprise Institute.