Spain's election shocker last week has left analysts speculating. Was it a victory for the democratic forces that mobilized against Prime Minister Aznar? Or was it a victory for terrorists who aimed to influence the vote by bombing Madrid on March 11? Shada Islam, a journalist specializing in European foreign relations, writes that in Spain the election results were seen as both a repudiation of Aznar's support of the Iraq War and a protest against his attempt to downplay the possibility that Islamic extremists planned the Madrid bombings. More importantly, she says, in Spain - as in much of Europe - the Iraq War and the war on terrorism are seen as separate issues. Looking forward, Spain's new government will likely move the country's policies closer to the 'old Europe' of France and Germany, a shift that could break down the intra-EU rifts created by the Iraq War. Although the UK and Italy officially still stand firmly with the US on Iraq, Spain's apparent 'defection' may force London and Rome to deal more carefully with their own citizens' anti-war sentiment. The change in Spanish policy should not lead the US to believe that Spain or Europe is 'weak on terrorism', Islam concludes, but rather that "people can back tough anti-terror measures while also demanding a more thoughtful, multilateral approach to dealing with Iraq." - YaleGlobal 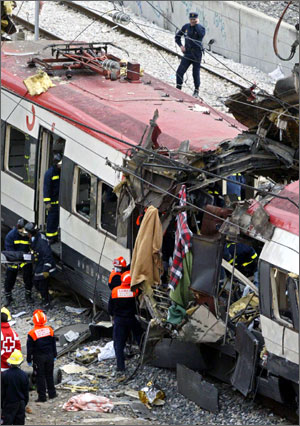 BRUSSELS: Spanish Prime Minister-elect Jose Luis Rodriguez Zapatero's reversal of the controversial pro-American policies of his predecessor Jose Maria Aznar has injected renewed acrimony into transatlantic relations. Many in Washington view the incoming Socialist government's decision to withdraw Spain's 1,300 troops in Iraq by June 30 as pure and simple appeasement of terrorists. By "backing down", it is argued, Spain is sending the wrong message to the al-Qaeda-linked Islamic extremist groups believed to have masterminded the devastating railway bombings that killed 200 people on March 11. US President George W. Bush admonished Europeans this week to remain "strong and resolute and determined" in their fight against terror, while House Speaker Dennis Hastert accused Spain of being a "nation who succumbed to threats of terrorism." But US policymakers would be unwise to dismiss Zapatero as a soft touch for terrorists and anti-war activists.

The new Spanish leader's more critical stance on relations with Washington - he said recently that Spain and the US should deal with each other on an equal footing - is in tune with the general disenchantment with US unilateralism felt by the European public. A recently published Pew Research Center poll shows that unfavorable opinion of the US, which skyrocketed in the run-up to the Iraq war, has become even more negative in Europe. Zapatero is not alone among EU policymakers in describing the US occupation of Iraq as a "fiasco" and warning that terrorism cannot be fought with only bombs and Tomahawk missiles.

In contrast to sentiment in Washington, many in Europe argue that the Socialists' resounding electoral victory is a triumph for democracy. They believe it is the direct consequence of both popular frustration with Aznar's support for American action in Iraq and his government's clumsy attempts to gain an electoral advantage by pinning responsibility for the attacks on the Basque separatist group ETA.

Most importantly, Zapatero's election looks set to create key changes in the European Union's foreign and security policy as well as in Europe's domestic landscape. The incoming Spanish Prime Minister's critical view of the US and firm espousal of multilateralism is much more in sync with mainstream EU thinking than was Aznar's pro-US activism. Zapatero is also expected to help end the deadlock over a new EU treaty meant to streamline decision-making in the soon-to-be expanded Union of 25 states.

Zapatero's victory has triggered an immediate and radical rejiggering of EU alliances. Madrid's U-turn on relations with Washington weakens the position of Britain and Italy, countries which are part of the US-led coalition in Iraq and whose governments remain faithful American allies despite continuing public distrust of the US. "If Spain pulls out its troops from Iraq, we should watch out for a chain reaction in Italy and Britain," argues a senior EU diplomat. Governments in both countries are likely to come under similar public pressure to rethink their commitment to the Iraq coalition. Italian Prime Minister Silvio Berlusconi's position is seen as particularly vulnerable.

Whether or not Rome and London feel the political fall-out from the Spanish polls, both stand to lose clout following an impending shift in Europe's post Iraq-war balance of power. Zapatero's decision to revive frayed relations with France and Germany strengthens the hand of so-called "old European" states which remain wary of America's Middle East policies and continue to back diplomacy over the unilateral use of force. "The pillar of pro-American new Europeans, which was built around Aznar, has crumbled," said an EU diplomat, adding: "This can only be good news, because it strengthens unity in Europe and ends confrontation between so-called new and old Europeans"

Unlike their US counterparts, officials in Brussels argue that Zapatero's pledge to withdraw 1,300 Spanish troops from Iraq by June 30 is not as radical as it first appears. It is conditional on whether or not the US turns the peace-keeping effort over to the United Nations. As such, some EU officials are suggesting that the US should push for a stronger UN role in Iraq. "Spain is not becoming isolationist. Zapatero is a multilateralist, a man who believes in the UN," argues Cecilia Malmström, a Liberal Democrat spokeswoman on foreign policy at the European Parliament.

In fact, for all the public outrage in Washington at Zapatero's statements, cutting a deal with the UN over Iraq is also on the US agenda. US officials have not ruled out seeking a new UN Security Council resolution on the transfer of sovereignty in Iraq. "President Bush wants an agreement with the US for internal electoral reasons," says Bill Drozdiak, director of the German Marshall Fund's Transatlantic Centre in Brussels. He adds that the UN could take over control of Iraq's civil administration during a transitional phase. Then, after June 30, occupying coalition forces could come under the authority of the UN, with NATO acting as "peacekeeping sub-contractor." Under this scenario, Spain may decide to keep its troops in Iraq - and a reluctant France and Germany could also be persuaded to join in.

Interestingly, despite the devastation caused by the Madrid attacks, Zapatero and his aides have gone out of their way to underline that combating terrorism requires more than military action. Noting that in Iraq, "there have been almost more deaths since the end of the war" than during last year's US-led invasion, the Spanish Premier-elect has warned that "terrorism is fought with the rule of law, international law and with intelligence services." At the same time, however, he has reassured Spaniards that his government would relentlessly hunt down terrorists. Other EU leaders, who will discuss ways to coordinate an EU response to the Madrid attacks at a summit in Brussels on March 25-26, are equally convinced that anti-terror actions must include efforts to tackle under-development, poverty and ensure improved governance.

On the European front, the incoming Spanish government's support for a new EU constitution also looks set to breathe new life into treaty talks which stalled last year after Aznar refused any downgrading of Spain's voting rights. "Europe will be a natural framework for our foreign policy," Zapatero told reporters, adding: "I will place Spain in the front line of European construction." European Commission officials make no secret of their satisfaction at Spain's change-of-heart over the constitution, predicting that an EU treaty could now see the light of day in the next few months. Spain's policy shift leaves Poland isolated in the battle to stop any revision of EU rules which would increase the weight of larger nations like France and Germany but slash the clout of middle-sized nations.

With European geopolitics undergoing rapid change, US officials have a choice: they can either deride Spain's new leader as a "softie" who was voted into power only because the Spanish people caved in to terrorist blackmail. Or they can finally understand that for many in Spain and Europe, the invasion of Iraq has nothing to do with fighting terrorism. With US voters later this year also expected to focus on Iraq, President Bush and his aides have a clear interest in denouncing Spanish voters for rejecting a pro-American, pro-war Prime Minister. But Zapatero's victory underlines that people can back tough anti-terror measures while also demanding a more thoughtful, multilateral approach to dealing with Iraq.