Enduring an IT Eclipse

In recent years, Bangalore has outpaced Silicon Valley in the global innovation race. This is not a temporary blip, writes author Ashutosh Sheshabalaya, but a fast-evolving reality to which the American IT industry must adapt for the long haul. While offshoring is hardly a new phenomenon, it was previously restricted to back-office support functions. This is no longer the case: IBM and Hewlett Packard, among other technology multinationals, recently shifted some of their high-end R&D activities from the US to India. "Ironically," Sheshabalaya writes, "accepting India's centrality in the white-collar jobs debate, as well as the inevitability of its rise as a technology power, may provide some new choices for embattled American IT workers." India will face a shortage of managerial and marketing skills while dealing with Western customers, creating a significant opportunity for European and American workers. Likewise, the West must "dismantle definitions (and perceptions) about 'our' companies and 'theirs.'" And American IT workers, for their part, must perceive the new Indian tech giants not as undertakers, but as potential employers. – YaleGlobal

Enduring an IT Eclipse

As Bangalore overshadows Silicon Valley, the West must adjust accordingly for a chance to shine
A. Sheshabalaya
Tuesday, August 30, 2005 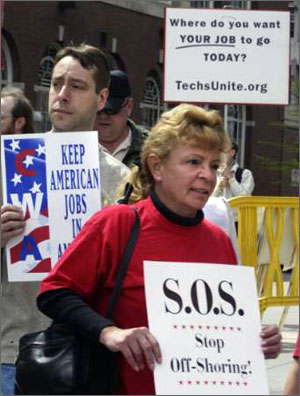 All is not lost: Despite dwindling jobs, there may yet be hope for US tech workers

BASSILY, Belgium: The American IT industry is amidst the throes of a profound structural shift, as more companies increase their presence in India. Although this development signals a major change, all is not lost for US jobs. What is required is a change in perspective that reflects fast-evolving realities – and proactive actions to reposition them accordingly.

At this moment, there seems to be a sense of resignation among American IT workers, accompanied by intermittent hiring blips that suggest that the "worst is over." The evidence, however, is hardly reassuring. In the first quarter of 2005, US government data showed jobs falling in all but one category, namely computer scientists and system analysts. A concomitant 5 percent rise in the share of IT management jobs since 2000 may only attest to the growing role of offshore services, managed out of the US, for now.

For many American IT workers, the failure of a recovering economy to produce steadier employment growth strengthens fears that US companies are moving out – creating new, higher-value technology jobs offshore. Many observers believe that this structural shift is masked by under-employment and lower-skill jobs created at home.

As the numbers show, IT jobs have hardly "come back." More crucially, no one has estimated how many Indian-Americans are counted within the figures, especially in the key "software engineer" category, or sought to assess the impact of Indian-origin IT workers returning to India. In a recent analysis of this phenomenon, The Boston Globe noted that it may result in the shift of "whole classes of jobs" out of the US.

Buttressing this reverse "brain drain" is another phenomenon: Indian IT workers increasingly prefer to remain in India. For instance, The Financial Times recently noted that only two out of 110 Bangalore-based employees at Silicon Valley's Symphony RPM showed interest in moving to the US, where Symphony employs just 10.

While IT jobs in Bangalore have for some time surpassed Silicon Valley, India's IT workforce crossed the 1 million mark in early 2005, and will no doubt rise further. According to recent calculations by ComputerWire, the Top 50 global IT service firms alone target raising Indian headcount from 173,000 in September 2004 to 500,000 by the end of 2005.

In June, the National Bureau of Economic Research published a paper by Harvard University professor Richard Freeman, warning the US about the imminent threat such developments pose to its high-technology leadership. One illustration of this phenomenon will occur when employment at GE's Global Research Headquarters in New York is surpassed by its Welch Center at Bangalore. Indeed, although the world media in June did link IBM's job cuts in the US and Europe to its recruitment drive in India, a more profound indicator of the forces at play is Hewlett-Packard's widely reported move in July to shut down four high-end R&D units in the US.

Other international technology corporations have rapidly ramped up cutting-edge research at their Indian facilities. In just two years since the process formally took shape, Indian R&D centers of American tech firms were filing for more patents than Bell Labs, the world's largest research organization. By 2006, IBM India on its own is expected to generate US$1 billion worth of innovations.

The month of August also yielded proof about the breadth of this impact, beyond IT. A few months after endorsing the international pharmaceutical patents regime, India announced 1,312 applications for drug patents, second to the US, and 25 percent more than third-ranked Germany – and way ahead of Britain, Japan, and others.

Ironically, accepting India's centrality in the white-collar jobs debate, as well as the inevitability of its rise as a technology power, may provide some new choices for embattled American IT workers. In order to move forward, however, Americans (and Europeans) must firstly overcome the notion that they are competing against cheap- or low-wage Indians who are "stealing" their jobs. Through no fault of their own, Western workers face severe, structural handicaps in the global jobs battle. Their high-cost economies both underpin and reflect high standards-of-living in an increasingly connected and interdependent world. As giants like China and India, with significantly lower living standards than the West – but much faster growing economies – begin to close such gaps, the terms "cheap" and "expensive" will themselves be redefined. So, too, will the global exchange rate system anchoring such yardsticks.

While efforts at anti-offshore legislation have run their course in the US, some commentators have urged strengthening the high school education system and increasing access to universities, to recoup America's technology leadership. These efforts are unlikely to make an immediate difference, and given the sheer pace of change, it is the near term which counts most.

For both the US and Europe, the greatest risk is not only a de-skilling of their future workforce should high-school children become discouraged from studying IT in colleges. Also dangerous is the potential hollowing-out of their skills pyramid if IT workers drop out from the workforce – especially in the hard-hit middle layers from which IT managers and analysts of the future would be drawn.

And here lies one opportunity: India's fast-growing IT industry will face a massive shortage of managerial and marketing skills while dealing with Western customers. A recent report from researchers Evalueserve estimates that 120,000 continental European workers will be needed in India over the next five years alone. The growing number of American and European interns at Indian technology firms shows that they at least are not waiting Godot-like, for a New, New Economy at home.

To further encourage their IT workers to ride the wave of the future, Western governments need to dismantle definitions (and perceptions) about "our" companies and "theirs." In a globalized world economy, seeking to protect workers in demarcated territories may be possible only if international corporations were stripped of their own territorial origins, especially as giants like GE and IBM begin to have larger high-value workforces in India than elsewhere.

As "Indian" and "international" IT firms lay down battle lines for the future, a growing number of observers believe that the former are better placed than their higher-cost American rivals desperately seeking to learn the innately complex business of large offshore operations. The massive market value of Indian IT firms on US stock markets indicates that the investment community endorses such a scenario.

While a Big Bang buyout by an Indian IT giant in the US or Europe is not ruled out, several smaller Indian firms are moving upstream into these markets, both by acquisitions and alliances. Though they have mastered the offshore delivery model (which they, in several senses, created), Indian IT firms will have to shed their traditional and sometimes obsessive low-cost focus, alongside their habit of importing Indian short-term visa holders, to undertake customer premise tasks in the US and Europe. Like the Japanese car industry in the 1980s, they too will have to start acting locally as they think globally.

However, such an evolution still faces strong cultural and business practice barriers. It may therefore be worthwhile for Western governments to encourage Indian IT firms to hire locally, instead of simply subsidizing the kindler and gentler landing of their more vulnerable "international" competitors.

Ashutosh Sheshabalaya is the author of ‘Rising Elephant: The Growing Clash With India Over White-Collar Jobs’ (Common Courage Press, 2004).