Between 300,000 and 1 million British people live part of the year in Spain and 150,000 live in France. Two reports suggest that such citizens confront a “no man’s land” on citizens’ rights post-Brexit as governments tend to treat such residents as tourists. “The findings suggest that ex-pat Britons face a lack of clear information, unresolved questions and confusion over residency regulations, and feel abandoned by the UK government, and let down by the French and Spanish authorities,” reports EURACTIV on the reports from Goldsmiths and University of London. The UK has developed a Settled Status Scheme, with status granted to more than 2.8 million, 40 percent of whom have temporary status of five years. EU law requires its 27 member states to organize their own bilateral rules for UK nationals. So health care, residency and other rules will vary by country. The two reports urge the UK to grant permanent status for Europeans, consider freedom of movement for UK nationals in Europe and even offer an option of associate EU membership for Britons. Britain is providing assistance to vulnerable EU citizens in applying to the scheme. – YaleGlobal

Two reports urge the EU and the UK to clarify “confused” policies to guide UK citizens who live in the EU
Benjamin Fox
Saturday, March 14, 2020

Read the article from EURACTIV with questions on the status of UK citizens who live in the European Union. 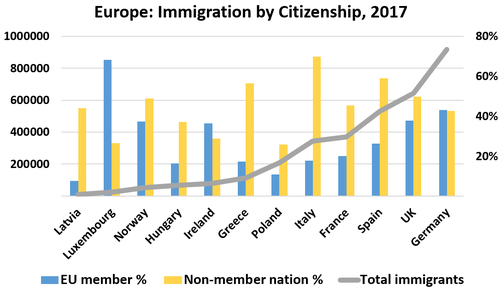 Germany reported the largest total of immigrants in 2017, followed by the UK, Spain and France (Source: European Commission)

BBC: Why Citizenship Is Now a Commodity

The Politics of Belonging