The European Union is uneasy, grappling with the effects of globalization on its economy. Public opinion leans toward protectionism and, as Shada Islam suggests in the second of a two-part series, that pushes policymakers to take an aggressive stance against China, a country often associated with the benefits and downside of globalization: In its economic boom, China has benefited from the large, open markets like those in the EU. European policymakers lament, though, that China pads gains with a devalued currency and closed domestic markets, allowing export-oriented growth without facing foreign competition at home. Despite Europeans’ fear of job losses and wage reductions stemming from globalization, the EU, too, has benefited from an open economic system. While European leaders vow to get tough with China, bilateral trade and joint-investments remain vital for both economies. Some EU concerns are legitimate – such as an unsustainable trade deficit – but Islam suggests that the true test for Europe is finding its own role in a changing globe. – YaleGlobal

European leaders find it easier to get tough on China rather than develop adjustment strategies
Shada Islam
Friday, February 1, 2008 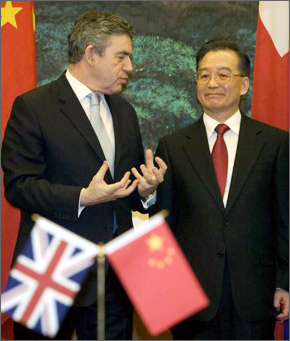 BRUSSELS: A procession of European leaders to China – Germany’s Chancellor Angela Merkel, French President Nicolas Sarkozy and British Prime Minister Gordon Brown – demonstrates the importance the European Union attaches to the Asian giant. Yet the European Union’s once warm embrace of China has turned sour as the 27-nation bloc and Asia’s leading economic powerhouse engage in acrimonious debate over trade, exchange rates and policy towards Africa.

The changed mood was evident at the 10th EU-China summit held in Beijing last November. In contrast to previous meetings between the two sides, the meeting was marked by tough talk from EU representatives over Europe’s rising trade deficit with China, demands that Beijing act rapidly to adjust its monetary policy to allow for strengthening of the yuan and warnings that the country must reduce trade and investment barriers or face a protectionist backlash in Europe.

The EU message to China is simple, said the bloc’s trade chief Peter Mandelson. Having benefited from open markets in the US and Europe, it’s time for Beijing to play fair in international trade. “China has perhaps been the single greatest beneficiary of a rules-based open trading system in the last decade,” Mandelson urged. “Now China must live by the same rules. She cannot expect special considerations.”

Europe has a long catalog of complaints against Chinese trade practices. Like their counterparts in Washington, EU policymakers in Brussels say the bloc’s trade deficit with China – expected to reach €170 billion by the end of 2007 – is “unsustainable.” Demands include China stepping up enforcement of laws protecting intellectual property rights, boosting quality controls for exports, and implementing commitments under the World Trade Organization to open markets and stop discrimination against foreign investors.

EU leaders hammer home the anti-globalization message. During the 2007 French presidential campaign, Sarkozy repeatedly called on the EU to protect citizens against the negative effects of globalization and defend Europe’s economic interests more decisively in dealing with China and the US. "The word 'protection' must not be forbidden in European democracy,” Sarkozy told the European Parliament in November. The focus must be on reciprocity, he explained, because Europe has the duty to ensure its own energy and food independence.

Data on globalization’s impact on Europe’s economy remain sketchy, however, with many economists underlining that factory closures on the continent are due not only to international competition but also factors such as poor productivity and inefficient management. While some job losses in manufacturing – such as in textiles and clothing and the auto sector – are partly the result of international competition, overall Europe has benefited from an open economic system. An additional 3.5 million jobs were created across the EU in 2006, and growth in the bloc is expected to remain around 2.5 percent, despite rising energy prices and a strong euro. The EU remains the world’s largest exporter of goods and services and has maintained its 20 percent share of world trade despite increased competition from China. In addition, competitively-priced Chinese products have acted as a brake on EU inflation and interest rates, providing cheap inputs for European manufacturers, a competitive impetus for business, and a boon to European consumers and retailers. 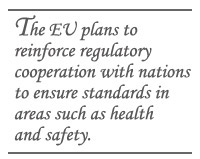 Still, with EU policymakers confronting a seemingly unstoppable anti-globalization bandwagon, being soft on China is no longer an option. Reflecting the new mood, Mandelson recently lambasted “an out-of-control Chinese juggernaut.” The EU has also slapped tougher trade safeguards on China, including EU anti-dumping fines on a range of Chinese goods, including energy-saving light bulbs and leather shoes, and restrictions on Chinese textile exports. Beijing can expect more European trade protection unless rapid action is taken to narrow the huge trade gap, including measures to boost domestic demand and strengthen the yuan, warn EU officials.

Signaling more draconian EU measures in the pipeline, European Commission President Jose Manuel Barroso vowed that the focus in 2008 will be on “equipping Europe for a globalized world.” The EU was “no soft touch,” said Barroso. Europe will defend its interests vigorously in the age of globalization, he said, adding that “offensive openness…without naivety but with an activist stance” would be the EU’s mantra with foreign partners.

In addition to stronger action to pry open markets in China and other emerging economies, the EU plans to reinforce regulatory cooperation with countries to ensure a convergence of standards in areas such as health and safety. Pressure grows on other fronts. A spate of quality-control scares involving Chinese-made toys led to demands for tougher regulation of toy imports. Sarkozy presses the EU to penalize cheap imports from high carbon-emitting countries like China to defend EU companies obliged to meet strict environmental standards. Germany, meanwhile, plans to shield strategic companies from acquisition by state-controlled foreign sovereign investors and demand that similar measures be introduced on an EU-wide level.

Such proposals are by no means universally popular. Taking aim at Paris and Berlin, Mandelson has warned that European investors abroad could feel the backlash of any moves to curb foreign investments, even when shareholders are foreign governments. EU’s Nordic members remain avid free-traders and try to curtail the bloc’s use of anti-dumping measures. And although the new crop of EU leaders, including Sarkozy, Brown and Merkel are less enamored of China than their predecessors, they know they must walk a fine line between criticizing Chinese trade and monetary policy while helping to secure lucrative contracts for their China-hungry businesses.

Not surprisingly, therefore, China appears confident that Europe’s sourness will fade. It could be a long wait, however. Policymakers recognize that by provoking a downward spiral of protectionism, any EU crackdown on Chinese trade and investments will end up slowing European growth.

The challenges facing the EU in dealing with China require hard work at home. Governments must pursue the right competitiveness and adjustment policies, moving to develop areas of comparative advantage in high-value and high-tech design and production, foster innovation and help workers adjust and retrain. Rekindling the EU-China love affair must wait until Europe becomes more confident about its ability to live in a more competitive, globalized world.