Even Labor Unions Can Gain from Free Trade

In the long negotiations before the implementation of the North American Free Trade Agreement (NAFTA), pundits, politicians, and unions alike predicted that NAFTA would bring increased animosity between transnational unions. They would now be competing for the same jobs, the argument went, and so labor solidarity will obviously break down. Instead, says labor scholar Tamara Kay, North America has seen an increased cooperation between Mexican, American, and Canadian unions. Rather than competing with each other, they now all have the same enemy - corporations who through a "race to the bottom" attempt to use NAFTA to lower wages and avoid costly labor standards. From their original opposition to NAFTA to their continued commitment to avoiding the potential pitfalls of free trade, labor unions across borders have come to see their goals as communal and their cooperation as necessary. Nongovernmental organizations have also teamed up with the unions to bring about greater protection for the environment and women's rights. Ten years on, Kay argues, it is clear that "global governance institutions such as NAFTA can stimulate labor transnationalism by providing new political arenas and venues to advance labor interests." - YaleGlobal

Even Labor Unions Can Gain from Free Trade

Despite dire predictions to the contrary, NAFTA has led to closer bonds between North American unions
Tamara Kay
Tuesday, December 23, 2003 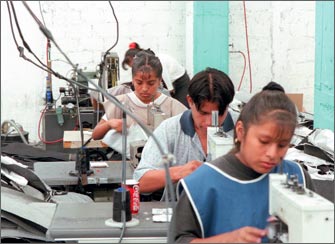 BERKELEY: When NAFTA went into effect on January 1, 1994, many predicted that by increasing competition for jobs between North American workers, the free trade agreement would intensify animosity among North American unions. Some economists insisted that the divergent interests of labor unions north and south of the Rio Grande would eclipse any possibility for cross-border labor cooperation. Even activists worried that in an effort to prevent a hemorrhaging of jobs to Mexico, US and Canadian unions would scapegoat Mexican workers and immigrants. On the eve of NAFTA's ten-year anniversary, an examination of the aftermath of the struggle against free trade in North America reveals that far from polarizing workers, NAFTA had the unanticipated consequence of stimulating labor transnationalism - ongoing relationships based on cooperation and collaboration - among North American unions.

The relationships that developed during NAFTA's negotiation among some North American unions stand in stark contrast to the sporadic contacts unions had in the pre-NAFTA era, which usually consisted of vacuous letters of support, elaborate dinners, and staged photo-op handshakes. This presents a compelling puzzle: how did NAFTA, the concrete manifestation of globalization processes in North America, help deepen labor solidarity on the continent? 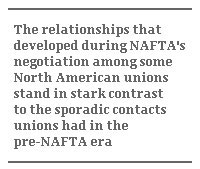 NAFTA catalyzed labor transnationalism by generating intense and unprecedented political mobilization, meaning that unions saw it in their common interest to work together to kill the free trade agreement. Labor unions in Canada, the US and Mexico, many of which had been isolated and estranged from each other, created new ties of cooperation and networks of protest during NAFTA's negotiation. Although these networks - created to promote "ethical trade advocacy" - could not hold back the free trade tsunami in North America, they successfully fended off fast track authority in 1997.

Perhaps the most robust relationship to emerge out of anti-NAFTA organizing is that between the United Electrical, Radio, and Machine Workers of America (UE), and the Authentic Labor Front (Frente Autentico del Trabajo, or FAT). These unions did not have a relationship prior to 1991 even though they shared a progressive leftist political agenda. Their first substantive contact occurred in Zacatecas, Mexico in 1991 at a forum dubbed "Public Opinion and the NAFTA Negotiations: Citizen Alternatives." The forum was convened by a trinational coalition of labor, environmental, and other progressive organizations to coincide with the meetings of the trade ministers of the three North American countries. It was here that the FAT and UE developed the idea for a "Strategic Organizing Alliance." Since 1994 the two unions have collaborated on labor organizing and political campaigns, built a workers' education center in Mexico, and held yearly worker and organizer exchanges and training/education sessions.

Like the UE, the Canadian Steelworkers also developed a relationship with the FAT as a way to deal with the effects of NAFTA. Their cutting edge program involved building a strike fund for the FAT, which previously had no access to emergency funds. Grounded in mutual interest and long-term strategic planning, these developments signal a real shift in the nature of labor transnationalism in North America. They are not based on the ethnocentric paternalism that in previous decades had sent American and Canadian unions scurrying to the Mexican border with money and "expert" advice for their Mexican counterparts. One of the most salient examples of this shift occurred in 1994, when the UE requested assistance from the FAT to organize Latino workers as part of its organizing drive in a Wisconsin plant - and won.

NAFTA also stimulated labor transnationalism by creating an institution through which labor activists could collaborate. The North American Agreement on Labor Cooperation (NAALC) established new rules, procedures, and venues to adjudicate complaints of labor rights violations (called submissions) through National Administrative Offices (NAOs) in each of the three NAFTA countries. The NAALC's procedural rules require that submissions be filed through an NAO in a country other than the one in which a labor violation occurred, which makes it extremely difficult for a union to file with a "foreign" NAO without the assistance of a "foreign" union. This stipulation sparked a flurry of trinational activity among unions. To date, twenty-six NAO submissions have been filed, and while only one or two unions participated in the first few submissions, up to fifty unions and nongovernmental organizations - many with no previous contact - participated in subsequent submissions. Many NAO submissions go well beyond legal maneuvering to incorporate concrete actions, including massive letter writing campaigns, demonstrations, and actions at company shareholders meetings. 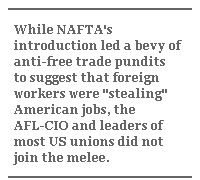 While NAFTA did not generate relationships among all North American unions, its effects on many unions were profound. Even the AFL-CIO - dubbed the AFL-CIA by progressive Mexican unionists during the Cold War - began to work with independent Mexican unions when its Mexican counterpart, the Congress of Mexican Workers, refused to oppose NAFTA. As one AFL-CIO official explained, "De facto in this process, solidarity links have been built and strengthened. And there's no question that due to this struggle over NAFTA, we have more working relations with the Mexican labor movement and with the Canadians with regard to Mexico than ever before."

NAFTA also marked a turning point for how many US unions dealt with the issue of foreign workers and job flight. While NAFTA's introduction led a bevy of anti-free trade pundits to suggest that foreign workers were "stealing" American jobs, the AFL-CIO and leaders of most US unions did not join the melee. Matt Witt, Teamsters Communications Director during the fight against NAFTA offered one explanation: "The increased communication and contact with union activists from Mexico meant that whatever instinct people might have had to go in that direction ran up against the real coalition work people were doing based on the traditional union principle that you either raise and maintain standards together or you face a race to the bottom." 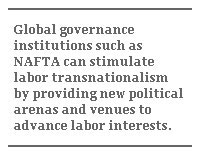 Canadian labor leaders also actively eschewed racialized and divisive rhetoric during the free trade debates. In a 1990 letter to Shirley Carr, then President of the Canadian Labour Congress, Robert White (President of the Canadian Auto Workers, who later succeeded Carr at the CLC) wrote to suggest how the CLC should publicly frame issues related to the free trade agreement: "We have to not just avoid, but counter any racist tendencies. The enemy is not Mexican workers. It is corporations trying to escape obligations, and governments trying to guarantee these corporations "favourable" environment by attacking trade union, human and political rights."

The emergence of trinational relationships in North America suggests that global governance institutions such as NAFTA can stimulate labor transnationalism by providing new political arenas and venues to advance labor interests. The implication is not that labor activists should embrace neoliberal free trade agreements. Indeed, NAFTA had significant negative effects on workers. Rather, activists should remain pro-actively engaged in the process of shaping and strengthening those agreements to ensure that they provide more political opportunities and democratic institutions, not fewer. Other scholars have shown that few social movements are as well-positioned to serve as ballast against the vagaries of an ever-expanding global economy as a transnational labor movement, with its established membership, political clout, and financial resources. If labor unions refuse to engage global governance institutions such as the NAALC, the FTAA, and the WTO, their ability not only to protect workers' rights, but also to serve as a mechanism to build labor transnationalism, will be compromised.

Tamara Kay (www.socrates.berkeley.edu/tamarak) is completing her Ph.D. at the University of California, Berkeley. Her dissertation, “The Rise of Labor Transnationalism: NAFTA and the Politics of Cross-National Collaboration Among North American Unions,” addresses the emergence of labor transnationalism in the context of North American regional economic integration.