The mayor-elect of Istanbul, Ekrem Imamoglu, countered authoritarian tactics and demonstrated their weakness. Turkey’s largest city elected Imamoglu, and Turkey’s President Recep Tayyip Erdoğan, rejecting the defeat of the Justice and Development Party candidate and claiming election fraud, ordered a repeat of the election. Imamoglu won again by a greater margin. Erdoğan, a former mayor of Istanbul himself, once said: “The person who governs Istanbul, governs Turkey," and “many Turks see Imamoglu as their next president,” explains Maximilian Popp for Spiegel. “From this point on, Erdogan will be fighting for his political survival.” With inflation at 19 percent and 25 percent unemployment among youth, voters expect economic growth, pollution control, management of the Syrian refugee crisis, expanded public transport, and reduced nepotism and corruption. Urban areas often lead on resisting authoritarian trends, and Imamoglu’s Republican People’s party won four of Turkey’s five largest cities while signaling it would respect diversity and not engage in religious discrimination. The election outcome has emboldened opponents within Erdoğan’s own party who may split and form their own party. – YaleGlobal 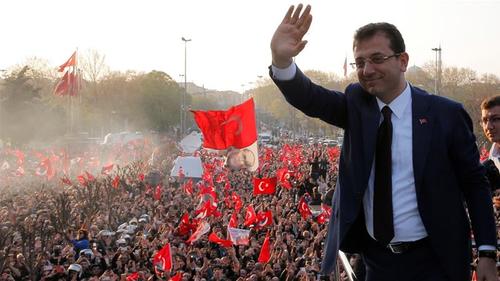 Read the article from Spiegel International about Ekrem Imamoglu’s second victory in the Istanbul mayoral election.

Maximilian Popp has been deputy head of foreign affairs for Spiegel since April 2019, and he has worked for Spiegel since 2010. For his Turkey coverage, he was awarded the journalist prize of the Southeast Europe Society. He graduated from the Henri Nannen School of Journalism in Hamburg and studied Political Science in Istanbul.