In coming decades, a population rise in developing nations is projected to greatly surpass expected population declines among developed countries. Some developing nations that lack industry and ample jobs forestalled poverty by devising policies that encourage citizens to work abroad. That strategy has helped reduce poverty by bolstering domestic employment, individual skills and foreign exchange through remittances. But that strategy could backfire in the current economic crisis, as workers stop sending remittances or even return home. Demographer Joseph Chamie analyzes the cases of Mexico, Morocco, the Philippines – each with populations that increased substantially over the past century and found labor export a valuable policy option. In recent years, wealthy nations have sought to tighten borders and establish campaigns to warn the poor in developing nations against migration during difficult times. But Chamie warns such programs could come too little, too late, as pressures – a lack of food or water, let alone jobs, political mechanisms or security – build for teeming populations who seek relief abroad. – YaleGlobal

A worsening economic crisis could spur the poor to seek jobs in new lands – or even to return home
Joseph Chamie
Wednesday, January 21, 2009 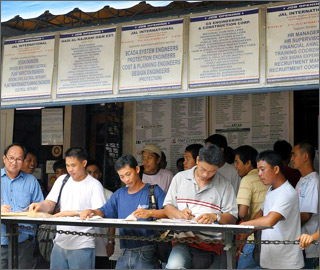 NEW YORK: When a nation’s population becomes far larger than its domestic economy can readily accommodate, governments can either do nothing and allow poverty to set in or they can export people. That policy has worked for many countries. In 2008, nearly $300 billion were remitted to developing countries by immigrant labor.

Many developing countries have found it attractive and profitable to facilitate the departure of workers and their families. By having their citizens work abroad, sending countries have the opportunity to gain valuable foreign exchange through remittances, reduce domestic unemployment and lessen poverty levels as well as diminish the risks of civil unrest. 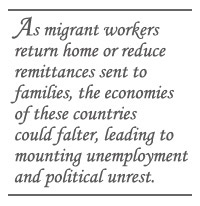 Yet with the widening global economic slowdown, the strategy could backfire. Living conditions in labor-exporting countries will in all likelihood worsen. As unemployment rises in the labor-importing nations, governments will cut the number of foreign-worker permits, restricting family reunion visas and offering incentives, and in some cases disincentives, for unemployed foreigners to go home, especially those immigrant workers in the country unlawfully. Moreover, given the widespread public sentiment in Europe and the United States for lower levels of immigration even before the economic downturn, elected officials in these countries will face mounting pressures to substantially reduce numbers of foreign workers.

As migrant workers return home, or at least reduce the amount of remittances sent to their families, the economies of the labor-exporting countries are likely to falter, leading to mounting domestic unemployment and political unrest. Anticipating these possible troubling outcomes, some developing countries are taking steps, such as providing money to troubled industries to prevent layoffs and launching public-information campaigns, to mitigate expected social and political consequences of the economic slowdown and reduced remittance flows.

Illustrative of this demographic-development strategy and the pitfalls are the experiences of Mexico, Morocco and the Philippines. 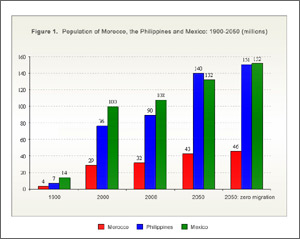 Figure 1. Population of Morocco, the Philippines and Mexico: 1900-2050. Enlarge image

Such rapid rates of population growth combined with shortcomings in the domestic labor market have led to approximately 10 percent of the Mexican, Moroccan and the Philippine populations residing and working aboard.

Perhaps the most advanced government program to promote overseas employment is in the Philippines, where the Philippine Overseas Employment Administration established more than a quarter century ago has become an integral part of the country’s Department of Labor and Employment. Mexico also has agencies to aid citizens working abroad, such as the Program for Mexican Communities Living Abroad. In addition, the government started a program known as "3x1" – for every $1 sent from a Mexican emigrant club or association for a development project in Mexico, the government contributes $3. In a similar vein, Morocco established in 1990 a ministry to aid its citizens working abroad as well as the "Fondation Hassan II pour les Marocains Résidant à l'étranger," which fosters links with Moroccan migrants.

In 2008 these overseas workers sent home remittances amounting to $24 billion, $7 billion and $17 billion dollars, respectively. Individual monetary remittances are the second largest source of foreign currency for Mexico after oil, and remittances are a major factor in the economies of Morocco and the Philippines, representing 10 percent and 14 percent of their respective GDPs.

If large numbers of their overseas workers were to return home, the three nations would face increased domestic unemployment and related economic hardships, possibly leading to civil instability and perhaps subsequent political upheaval. In addition, without the substantial inflows of remittances, millions of Mexican, Moroccan and Philippine families who have come to rely on this income would face significant declines in their living standards, with some joining the ranks of the impoverished underclass. Falling remittances would also likely have a rippling effect throughout the economies insofar as the monies are used primarily for consumption. 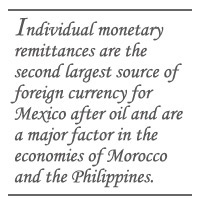 The large and widening demographic imbalance between the regions is exacerbated by the enormous socioeconomic differences in living conditions. In many parts of the developing world, especially in Africa and South Asia, populations already confront low pay, limited health care and few career opportunities, with life in rural areas being especially harsh. In addition, personal security is often lacking or inadequate for many.

Well before the current financial crisis began, tens of millions of men and women had resorted to illegal immigration. In response to these unauthorized flows, labor-receiving countries tightened borders and policies, instituted new guidelines and procedures, e.g., photos, fingerprints, lengthy detentions, deportations and immigration bans, signed agreements and other initiatives with other countries aimed at reducing illegal immigration flows. 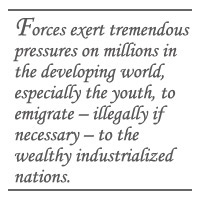 Some months ago, for example, the European Union financed the establishment of the Centre for Migration Information and Management in Bamako, Mali, which serves a job center, a source of advice on legal ways of settling in Europe as well as counsel on the hazards of illegal migration. More recently, the United Nations and the European Union announced a €15 million joint initiative to promote legal migration, address life-threatening illegal flows and protect migrant workers during the current economic crisis.

Nonetheless, such efforts to confront illegal migration are likely to be too little and too late. The worsening global economy, the vast and widening differences in living standards, including political instability and insecurity, and the enormous demographic imbalances between richer and poorer regions are generating powerful migration forces. These forces exert tremendous pressures on millions of men and women in the developing world, especially the youth, to emigrate – illegally if necessary – to the wealthy industrialized nations. Against these formidable push-pull migration forces, warnings, information campaigns, bilateral agreements, sanctions and even penalties are unlikely to be sufficient to deter the growing outflows of illegal migrants.