The Fallout of Pakistani Revelations on North Korea

North Korean nuclear programs have long been a puzzle for the international intelligence community to solve. No one is quite sure when they started, how they started, or how far along towards producing weapons-grade uranium and plutonium they are. The recent revelation by Pakistani scientist A.Q. Khan that he sold technology to the North Koreans could begin to unravel the mystery. Talks this week between Asian nations as well as the US and Russia will try to use this new intelligence to confront North Korea and push it towards disarmament. Phillip C. Saunders, senior fellow at the Institute for National Strategic Studies (INSS) at the National Defense University, argues that Khan's admission will help verify or disprove previous North Korean claims as to the state of their program. It will also help reduce North Korean bargaining power, for the international community now knows a good deal more than they did about its clandestine efforts. Finally, Saunders offers the hope that Kim Jong-Il, North Korea's leader, will realize that his country can no longer play the dangerous nuclear game and will willingly disarm. – YaleGlobal

The Fallout of Pakistani Revelations on North Korea 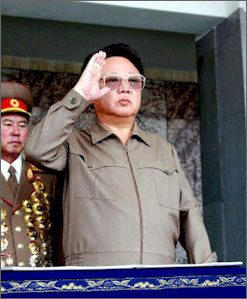 North Korean leader Kim Jong Il reviews his troops: Will the Pakistani revelations about his clandestine effort force him to come clean?

WASHINGTON: Recent revelations about Pakistani scientist A.Q. Khan's involvement in a global network selling fissile material production technology and a nuclear weapons design have highlighted Pakistan's role as a proliferator. The public airing by Pakistan of the clients involved in this clandestine trade - Iran, Libya and North Korea - has also opened up new avenues for detecting and perhaps halting proliferation.

President Bush and CIA Director George Tenet recently revealed that US intelligence agencies successfully penetrated this covert procurement and production network and learned key details about the trade and the buyers. Conclusive information that North Korea had traded ballistic missiles and production technology to Pakistan in exchange for uranium enrichment technology prompted Assistant Secretary of State James Kelly's October 2002 visit to Pyongyang to confront North Korea about its uranium enrichment activities. To the surprise of US diplomats, North Korean officials admitted the existence of a uranium enrichment program, although they subsequently denied making any such acknowledgement. US information prompted Pakistan to launch its own investigation of the Khan network in October 2003, which eventually led A.Q. Khan to confess his involvement and request clemency.

The unraveling of the Pakistani network has already given a major boost to international nonproliferation efforts. Information about centrifuges acquired from Pakistan prompted successful efforts to pressure Iran to sign the Additional Protocol to the Nonproliferation Treaty and to agree to stop its uranium enrichment activities. (However discovery of undeclared uranium enrichment technology last week has reinforced concerns about Iran's continued interest in nuclear weapons.) Intelligence also allowed the interception of a freighter carrying centrifuge components to Libya last fall. This discovery, along with other information about Libya's role in the procurement network, helped US and British officials persuade Libya to disclose details of its WMD programs and to renounce its WMD ambitions.

Can revelations about the Pakistani proliferation network help eliminate North Korea's nuclear weapons programs? Pakistan has reportedly promised to share details of the network's transactions with the United States. The new information may answer key questions about North Korea's uranium enrichment activities and shape the positions of the countries participating in the six party talks on the Korean nuclear crisis, which will resume in Beijing on February 25. 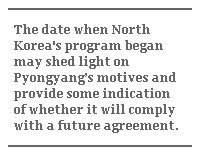 First, it should be possible to discover when North Korean efforts to acquire uranium enrichment technology started. Some claim that North Korea began a highly-enriched uranium (HEU) program immediately after signing the Agreed Framework in 1994, indicating that Pyongyang was bargaining in bad faith all along. Others believe that the transactions began in 1997 or later, after North Korean became increasingly concerned about delays in US implementation of its commitments under the Agreed Framework. When the program began may shed light on Pyongyang's motives in pursuing HEU technology, providing some indication of whether North Korea is likely to comply with a future agreement.

Second, the equipment Pakistan transferred may reveal the scale of the North Korean HEU program. Was it a pilot program intended as a hedge against collapse of the Agreed Framework? Or was it a large-scale effort to develop a second path to producing nuclear weapons? (North Korea's current nuclear arsenal is based on plutonium reprocessed from spent nuclear reactor fuel.) Assistant Secretary Kelly recently stated that "North Korea's goal appeared to be a plant that could produce enough weapons-grade uranium for two or more nuclear weapons per year when fully operational." However it is unclear how far North Korea advanced toward that goal. 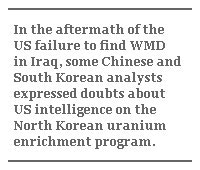 Third, the specific equipment and materials acquired provide a baseline for verification if an agreement is eventually reached to dismantle the North Korean nuclear weapons program. At a minimum, the United States and other participants in the six party talks (China, Japan, Russia, and the two Koreas) should insist that North Korea fully account for all centrifuges, enrichment technology, uranium feedstock, and any weapons designs that Pakistan transferred. If Pakistani scientists visited North Korean enrichment facilities, the locations of these facilities would provide a starting point for site inspections to verify the dismantlement of the North Korean HEU program.

Finally, information from Pakistan will undercut North Korean claims that it does not have a HEU program. In the aftermath of the US failure to find weapons of mass destruction in Iraq, some Chinese and South Korean analysts expressed doubts about whether US intelligence on the North Korean HEU program was accurate. The United States can now provide detailed evidence to support its charges without compromising sensitive intelligence sources and methods. Despite North Korean efforts to dismiss A.Q. Khan's confession as "groundless propaganda" and "unverifiable fiction," evidence from Pakistan should settle the issue once and for all.

New information about North Korea's nuclear program will aid US diplomats, but negotiations will not be easy or fast. The US objective is "complete, verifiable, and irreversible" dismantlement of North Korea's nuclear programs. The first task will be to insist that the uranium enrichment program be addressed in the negotiations. Chinese and South Korean officials have floated proposals that North Korea should freeze its plutonium program as the first step in an interim deal. The United States should insist that the HEU program be included in any interim agreement and fully addressed in a final settlement.

Experts agree that verifying the elimination of uranium enrichment activities is more difficult than verifying the elimination of plutonium production. Plutonium production requires a large infrastructure that includes nuclear reactors and reprocessing facilities; uranium enrichment can be performed in smaller facilities that are much harder to locate and to monitor. New details about the North Korean HEU program provide a better starting point for verification efforts, though devising a satisfactory verification regime will be difficult.

Another obstacle is concern about Pyongyang's willingness to comply with an agreement over the long term. Clear proof of North Korea's violations of the Agreed Framework will help the United States insist that North Korea prove its willingness to give up its nuclear weapons capability for good.

The six party talks will require long, difficult negotiations if a final settlement is to be reached. The United States will insist that North Korea satisfy its criteria for "complete, verifiable, and irreversible" elimination of its nuclear program, while North Korea will seek a security guarantee and extensive economic assistance in return for giving up its weapons. Issues such as the precise terms of an agreement, a satisfactory verification regime, and the sequencing of commitments will need detailed study and careful negotiations. Nuclear revelations from Pakistan will strengthen international efforts to eliminate North Korea's nuclear weapons capability, but an agreement will ultimately require North Korean leader Kim Jong-il to decide that his country will have a better future without nuclear weapons. Libyan leader Muammar Gaddafi eventually reached this conclusion; the world is still waiting to see what Kim Jong-il will decide.

Copyright 2004 Yale Center for the Study of Globalization