“Fed, We Have a Problem”

Governments with checks and balances are accustomed to internal quarrels over the best ways to solve problems. Such is the case for the US in confronting a sub-prime mortgage crisis that threatens consumer spending, credit availability and jobs around the globe. Firms and investors facing immediate losses from the crisis urge the chairman of the US Federal Reserve System, Ben Bernanke, to lower interest rates and delay a US recession by forestalling some foreclosures and job losses. But lowering a key rate on federal funds raises concerns overseas, many undoubtedly expressed to US Treasury Secretary Henry Paulson, about increased risks of inflation and a US dollar trading at near-record lows. By presenting an imaginary conversation between an anonymous Chinese envoy and the US treasury secretary, Jeffrey Garten throws light on how Asian governments perceive the US sub-prime mortgage crisis and bailout of the risk-takers. With immense debt and the dollar dropping in value, the US has limited tools for battling recession as well as diminished clout in the global financial arena. – YaleGlobal

“Fed, We Have a Problem”

Wall Street clamors for lowering the interest rate, but that could unsettle major US creditors, including China
Jeffrey Garten
Wednesday, September 12, 2007 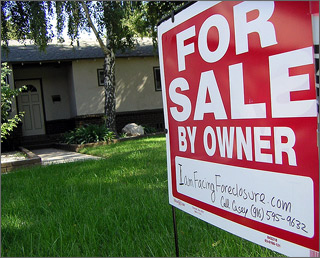 Distress signal: Subprime-mortgage crisis has begun to slow the US economy, but a quick fix could bring bigger trouble Enlarge image

NEW HAVEN: The odds are that the US Federal Reserve will lower interest rates when it meets Tuesday, September 18. Lowering rates may temporarily calm the market, but could also set the stage for bigger trouble in the future – trouble that will affect major US creditors, especially China. The issues at stake can perhaps best be appreciated with an imaginary encounter between Henry Paulson, US treasury secretary, and a senior Chinese official.

Here is how that encounter could evolve: Just before the scheduled meeting of the Federal Reserve, Paulson receives a call from China’s ambassador in Washington, arranging a meeting with an old friend from Beijing. Paulson invites the Chinese envoy to his home for dinner.

As they eat, the two men review a range of issues confronting the two countries. After dessert, the real conversation begins. 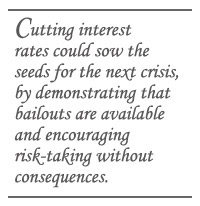 The envoy explains that China worries that a made-in-the-USA sub-prime problem is becoming a global debacle. China worries that the Federal Reserve may patch the crisis by lowering interest rates to prevent a mild recession and that the first cuts won’t be enough for the US political leaders and more will have to follow. In so doing, however, Fed Chairman Ben Bernanke would sow the seeds for the next crisis, demonstrating that recurrent bailouts are readily available and thereby encouraging ever-greater risk-taking without consequences.

Such action might be warranted if a deep recession loomed. But so far, the only people suggesting that are those who need rescue. The envoy points out that on September 7, after deeply disappointing employment figures and a major drop in the stock market, Paulson himself indicated that the US may be in for a slowdown in growth, but not something truly drastic. Yes, the envoy admits, China's exports could be hurt in the short run if the sub-prime crisis slows consumer demand. But Beijing has bigger fish to fry over the long term.

China has about $1.4 trillion in foreign-exchange reserves, says the envoy, about two thirds of which are invested in US dollars. By lowering interest rates to keep the US economy humming, the Federal Reserve in essence would flood the country with cheap money and reduce the value of dollars held by the Chinese. Never mind, the Chinese official notes, that the Bush administration has pursued a cheap-dollar policy for many years and never mind that the US pushes China to revalue the yuan so that any US dollars held would be worth less in China’s own currency. 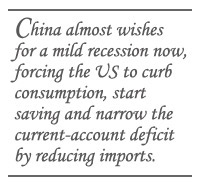 The problem, the envoy continues, is that the downward spiral of the greenback has no end in sight. China almost wishes for a mild recession now, forcing the US to curb consumption, start saving and narrow the current-account deficit by reducing imports. Such steps would curb rising US foreign debt, make it possible for China to stop lending so much to the US and keep the dollar’s value from plummeting. “Frankly speaking, Mr. Secretary, your country is like an addict who cannot control himself, buying everything in sight, even as he borrows beyond his means,” the envoy might say.

The envoy says his colleagues don’t understand how the king of capitalists can be so uncapitalistic. Market participants on Wall Street took on big risks. When times were good, investment bankers made fortunes, devising financial instruments too complex for anyone, even themselves, to understand and assigning arbitrary values to such funds. In a truly free market, the bankers and investors would have to live with the consequences.

The envoy questions why the Federal Reserve would bail out such risk-takers: “To borrow a phrase Americans use, it sounds to me like your system is based on the notion, ‘Heads, I win; tails, I win.’”

He presses Paulson about how the US can be so interventionist and at the same time bash China for trying to keep its currency from rising too fast, to prevent damage to Chinese banks, exporters and workers.

He reminds Paulson about the Asian crisis of the late 1990s: “Our Asian neighbors lived beyond their means. They had bad financial policies. So they went through a wringer, but came out stronger for it. Sometimes I wonder whether we Asians are more free-market oriented than you are.” 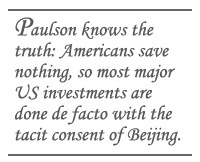 He pauses before resuming: “China feels cornered. The value of our dollar holdings is going down. With the way your government acts, our dollar-based investments will lose more and more of their value. Americans may think we have money to burn, but we earned those dollars through hard work and painful economic reforms. We must save for massive investments in schools, energy development, environmental technology, a modern social-security system and more.

“In addition, the US has made it very difficult for Chinese investors to buy appreciating assets in your economy. When we tried to buy the assets of Unocal, you shut us out on national-security grounds. Still, buying into corporate America remains attractive to us and, perhaps, could even make up for a depreciating dollar.”

Paulson is uncomfortable. After all, China has become America’s major creditor. Paulson knows the truth: Americans save nothing, so most major US investments are done de facto with the tacit consent of Beijing. When the US government talks of rebuilding New Orleans, it’s only because China lends Uncle Sam the money. When the US sets out to rebuild crumbling bridges, such as the one that collapsed in Minneapolis, it’s because China buys billions of US Treasury bills.

Moreover, if financial crisis hits the US, because of current developments in the credit markets or another reason down the road, Beijing could act as a stabilizer by using its funds to buy assets and boost prices. The bottom line: The US cannot take China for granted. Paulson knows if Beijing even gave the appearance of thinking about slowing purchases of US Treasuries, that itself would cause Wall Street to panic. Today's turmoil would look like child’s play.

Paulson mulls over the timing of this visit, in the middle of a financial mess. The envoy clearly doesn’t like the Fed’s raising interest rates. But is he hinting that Beijing wants to be consulted, just like any large creditor would, on how the US handles its monetary and economic policies? Does a threat lurk behind his questions? 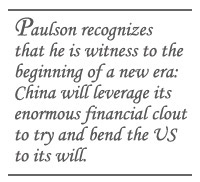 Paulson recognizes that he is witness to the beginning of a new era, one in which China will leverage its enormous financial clout to try and bend the US to its will. This could be a major transition point in modern financial history, just as when Great Britian had to share financial leadership with the US after single-handedly leading the financial world for at least a century.

The two men close with small talk. The envoy mentions his return to Beijing the next morning and plans to talk with mutual friends in high places. As the envoy gets into his limo, Paulson waves, turns around and closes the door. Paulson quickly walks to a secure phone, and calls Federal Chairman Bernanke: “Ben, better sit down. We have a problem.”

Jeffrey Garten is the Juan Trippe professor in international trade and finance at the Yale School of Management. He was formerly undersecretary of commerce for international trade in the first Clinton administration and, before that, a managing director of the Blackstone Group.