On July 9, North Korea announced its willingness to return to six-party discussions, after exiting negotiations more than a year ago. Anticipating the next round of talks, analyst Jonathan D. Pollack reviews the Bush administration's interaction with Pyongyang during "this oddest and most slow moving of crises." In the past, Washington has sought an unequivocal end to North Korea's nuclear program and avoided the step-by-step approach of the Clinton administration. But the failure of this policy to reach the desired results may have finally convinced the administration to change its tune, realizing that "another round of talks necessitates more than simply meeting, but also taking substantive steps towards agreement." Pollack forecasts the goals that the US and North Korea will seek when they meet in Beijing, but he emphasizes that successful negotiations depend on the willingness of both countries to leave behind the "ritualized posturing" of earlier talks and to make the uncomfortable concessions that nevertheless have the potential to transform the region. – YaleGlobal

But will North Korea now agree on a price to eliminate its nuclear arsenal?
Jonathan D. Pollack
Tuesday, July 19, 2005 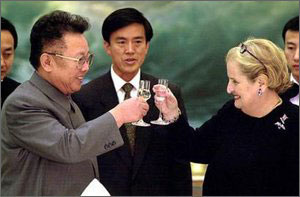 Cheers for nuclear-free Korea! US Secretary of State Madeleine Albright and North Korea's Kim Jong-il in 2000. Will there be a return to negotiations?

NEWPORT, Rhode Island: For the first time since the unraveling of the Agreed Framework accords in late 2002, there is guarded optimism about progress on the North Korean nuclear issue. On July 9, following a 13-month hiatus, North Korea announced its return to the six-party discussions. In word if not yet in deed, both Washington and Pyongyang have signaled an interest in negotiation – distinct from the ritualized posturing in previous talks. However, unless there is willingness to modify the profoundly divergent interests and expectations separating both countries, an actual diplomatic breakthrough could prove illusory.

During President Bush's first term, senior US policy makers repeatedly called for a "diplomatic solution" to the nuclear impasse. But they expected a solution to somehow materialize without negotiations. The US wanted North Korea to commit unequivocally and comprehensively to dismantle its entire nuclear infrastructure. Washington adamantly opposed any outcome that might enable the North to reconstitute its weapons program. The administration's stance was born out of its profound antipathies toward Pyongyang and an aversion to the step-by-step approach to conciliation pursued by President Clinton – an aversion demonstrated in official avoidance of the word "negotiations" to describe the Korean denuclearization process. Responding in kind to Washington's unequivocal stance, the North claimed in February 2005 to possess an unspecified number of finished weapons and pledged to expand its inventory.

Despite the presumed danger of nuclear weapons proliferation, American policy has demonstrated a seeming lack of urgency during this protracted nuclear standoff. Some US officials believed there were no possible circumstances under which North Korea would forego its emergent capabilities. Senior officials also contended that China and South Korea could bring far greater pressure to bear on the DPRK, but neither state seemed inclined to move toward more coercive options. Both Washington and Pyongyang seemed prepared to play for time in this oddest and most slow moving of crises.

However, unwilling to offer inducements to the North, lacking even remotely feasible military options to eliminate its nuclear weapons potential, and absent any signs that the DPRK was on the verge of collapse, the Bush administration seemed increasingly bereft of policy options. Indications in the late spring of North Korean preparations for a nuclear detonation only made matters worse. Although the North ultimately refrained from a test, it had demonstrated testing capability. These and related developments, such as the resumption of large reactor construction, seem to have convinced administration officials to reexamine the assumptions underlying US policy.

Meanwhile, during almost three years of acute tension and international pressure, Pyongyang has demonstrated grim persistence in its nuclear weapons objectives, undeterred by warnings from its adversaries and unmoved by demands from its principal benefactors. North Korea has become the first state to withdraw from the Nonproliferation Treaty. Analysts believe it may possess up to eight weapons. Further, it has removed from its nuclear reactor additional spent fuel, some or all of which has almost certainly been reprocessed into plutonium. The completion of the two larger reactors would make the potential risks of marketing nuclear material incalculably larger. The United States contends that the North continues work on a uranium enrichment facility, though knows neither its location nor its status. Pyongyang has also demonstrated a capability to prepare a nuclear weapons test site. It has managed to avoid isolation in the context of the six-party process, with a notional anti-nuclear coalition never coalescing in common cause. Finally, it has survived as a state.

These circumstances are not a ringing affirmation of the Bush administration's first-term strategy. Some within the administration seem quietly sobered both by North Korea's willful defiance and by the longer-term outlook in Northeast Asia should Pyongyang persist on its current path. This has led the administration to refrain from characterizing North Korea as one of world's "outposts of tyranny," and to acknowledge the North as a sovereign state. Also, senior US officials, including Secretary of State Rice, now explicitly refer to "negotiations" with Pyongyang. Washington seems to bear a heightened awareness that another round of talks necessitates more than simply meeting, but also taking substantive steps towards agreement. These actions and sentiments reflect the administration's tacit acknowledgment that its efforts have not yielded any of the desired results, and have strained US relations with Seoul. Officials are therefore broaching whether there might be an alternative path to constrain and ultimately to eliminate North Korea's actual capabilities and longer-term weapons potential.

What happens next? Pyongyang will likely pursue two overarching goals at next week's talks. First, it will commit to denuclearization as an ultimate goal, thereby attempting to demonstrate a "strategic decision," as demanded by Washington, to yield its nuclear capabilities. Reference to Kim Il-sung's supposed "dying wish" for a nuclear-free peninsula might be part of this commitment. This promise could also encompass a pledge to freeze specific ongoing activities, such as additional reprocessing and construction work at the reactivated reactor sites, both of which could be readily verifiable. Second, Pyongyang will again propose a phased disarmament process, whereby sequential, mutually reinforcing actions will place the North on a path to ultimate dismantlement of its weapons programs. The implicit premise in Pyongyang's message: The sooner its identified needs are met, the sooner it will disclose information and yield capabilities that Washington deems essential to realizing true denuclearization.

Is a negotiated outcome still imaginable? Washington refuses to characterize next week's talks in bilateral terms, but the other parties in Beijing intuitively understand that the US-North Korea relationship constitutes the essence of the matter. Is Pyongyang prepared to definitively forego strategic capabilities it deems integral to its identity and autonomy in a hostile world, in a manner acceptable to the United States? Is the United States prepared, for the sake of larger strategic gains, to make binding commitments to a hugely repressive regime and America's longest-running adversary – even though it neither trusts this regime nor wants to keep it in power?

The Beijing meeting therefore affords the last, best opportunity for Kim and Bush to tell each other and the world their respective answers. All other issues to be addressed at next week's talks pale by comparison. If either country answers "no" to the above questions, then all six parties will be on a path to a very different and far less congenial strategic future. Affirmative answers by both would only begin a highly protracted process with ample risks and transaction costs, but the ultimate results could transform Northeast Asia as a whole. To govern is to choose, and the stakes next week in Beijing could hardly be higher.