Globalization is an older phenomenon than many people realize. In the early 1400's, the Chinese emperor set about building trade ties between his Ming dynasty China and other peoples in Asia, the Middle East, and East Africa. Under the guidance of Admiral Zheng He, massive fleets plied the East China and Arabian Seas for 30 years, transferring goods, people, and ideas from one part of the known world to another. The current era of globalization may be distinguished by the speed of information exchange and other characteristics, but other eras of history offer an equally fascinating look at the process of globalization. - YaleGlobal 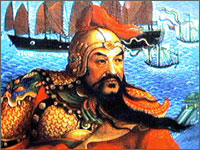 The year is 1405, and a giant imperial armada sails slowly out of the harbor at Liujiajiang, on the mouth of the Yangtse river. Nearly 300 craft, from giant "treasure ships," each displacing 500 tons and bearing twelve sails, to small sea-going junks, jostle their way into the East China Sea under the command of the "Three-Jewel Eunuch" Zheng He. Never before in human history have so many ships been assembled under a single command; indeed, not until the pell-mell evacuation of Dunkirk in 1940 and the Atlantic convoys of World War II will the world witness a fleet this large.

But Zheng's armada is not on a military expedition. Officially, its purpose is paternalistic: the Emperor Yongle, having seized power just two years earlier, is graciously sending this glittering fleet into barbarian lands to showcase the greatness of Chinese civilization, so that the savages may marvel at the glory of the Ming dynasty. In reality, Zheng is on a trade mission to the Arabian Sea, the nerve-center of 15th century world trade. His ultimate destination: the port of Calicut.

Chinese merchants had ventured into the Arabian Sea before, trading with Arabs, East Africans and Indians in ports on India's Malabar coast. The imperial fleet's task is to deepen and strengthen these commercial ties by establishing diplomatic relations with kingdoms in India, Arabia and East Africa. The "treasure ships" also are carrying Chinese goods like silks, porcelain and musk, to trade for Indian and African products - like spices, exotic timbers, jewels, pearls and ivory.

It's clear Emperor Yongle attaches a great deal of importance to this mission. Not only is the size of the fleet unprecedented, it is led by most trusted courtier, the "Three-Jewel Eunuch," who played a key role in securing the throne for the Emperor. Described as a giant of a man with a booming voice and flashing eyes, Zheng is nonetheless an unlikely naval commander. Not only is he a eunuch (he was castrated as a teenager), more at home among the intrigues of the imperial court than out at sea, he is also a Muslim, descending from Central Asian refugees.

But over the next three decades, Zheng would build an incredible seafaring legacy, to become Asia's greatest admiral. He would lead the imperial armada on seven expeditions to the Arabian Sea, along the way defeating fearsome pirate fleets, occasionally seizing (and then benevolently releasing) territory, and forging diplomatic relations with a dozen countries. The imperial fleet would inspire such awe among the kingdoms of the Arabian Sea that for more than a century Chinese merchants would get preferential treatment - a precursor of the Most Favored Nation status - in practically every port they visit.

And all this, fully 87 years before Christopher Columbus set sail for India and 94 years before Vasco da Gama found it - the two maritime breakthroughs that are generally regarded as landmarks of globalization.

In addition to expanding the Chinese sphere of commerce and influence, Zheng's expeditions also opened China's eyes to the outside world for the first time. The returning fleets brought in not only foreign goods (including such exotica as giraffes and zebras!) but also envoys and travelers, allowing for an exchange of ideas and worldviews. The imperial court could never bring itself to acknowledge that the people of the Arabian Sea lands possessed a high culture of their own, but it could not pretend that they were all savages. Zheng and his official chroniclers brought back reports of great cities and grand courts that astonished their long-insulated countrymen.

No kingdom impressed the Chinese more than Calicut, described as "the great country of the Western Ocean" by Ma Huan, Zheng's principal chronicler. Fully a tenth of Ma's seminal book, Yingyai Shenglan (Triumphant Visions of the Ocean's Shores) is devoted to descriptions of Calicut. .

Modern Kozhikode (it has reverted to its original name) is a minor port on India's southwestern coast - a dusty, hot and teeming urban sprawl that's indistinguishable from any other city in the state of Kerala. It is of little economic and political importance, and most Indians are scarcely aware of its existence. It's hard to believe that in the 15th and 16th centuries, this was Asia's most important commercial hub, a glittering emporium that attracted traders from all over the "civilized" world: Western Europe, East Africa, Central Asia and China. Calicut's harbor bustled with freight-bearing ships from Lisbon, Constantinople, Malindi and Nanjing. It was a tiny kingdom, no more than a harbor and a small hinterland. But it was blessed with a long line of sagacious rulers, known as Zamorins, who understood the needs of international traders and bent over backwards to accommodate them. Under their enlightened rule, Calicut was a proto-Hong Kong: a free port that offered world-class berthing and warehousing facilities, and the rule of law.

Ma Huan's account of Calicut would inspire other Chinese merchants to visit the kingdom, in search of trade and adventure. There would even be a Chinese quarter in the port, including huge warehouses and palatial residences. It was in one of these that Admiral Zheng died, after a brief illness, in 1433. His body was taken back to Nanjing for burial. Today, the Chinese quarter of Calicut is a confusion of narrow alleys and shops; the only hint of its past can be found in the name of its main artery - Silk Street. Where Zheng once resided there now stands an Islamic school. The admiral, a devout Muslim, would have approved.

But it's not only Calicut that has forgotten the grand Chinese armada. Even in China, Zheng He's adventures would be forgotten within a single generation of his passing. At the death of Emperor Yongle in 1424, the power of the eunuchs in the imperial court would gradually be broken by the Confucian elite, who frowned on any contact with the barbarians beyond Chinese borders. Zheng's travels - indeed his very name - would be struck from the official record. Chinese merchants would still venture into the Arabian Sea, but only smalltime traders; their role as a dominant merchant-marine force (and the MFN status) would be taken first by the Arabs and then by the Portuguese, Dutch and British.

It is tempting to speculate about what might have been. What if, instead of turning its back to the seas, China had continued its maritime explorations?

Even allowing for a slowdown at the death of the great admiral, it's entirely conceivable that the treasure ships would have rounded Africa and arrived on the shores of Portugal, Spain and England. Instead of European adventurers finding the sea route to the East, the East would have come to Europe. And, given the vast superiority of the Chinese shipbuilding technology (military as well as commercial) it's not hard to imagine that East-West seaborne trade may have been dominated by Zheng He's successors for centuries. The colonization of Asia and the Americas may never have taken place!

Why did none of this come to pass? Blame it on totalitarianism. In essence, China failed to capitalize on Zheng's explorations because of an emperor's whim. It didn't help that knowledge of the admiral's discoveries and successes was restricted to the imperial capital of Nanjing; the great Chinese peasantry had little, if any, inkling of the great world beyond the seas and the great potential for personal enrichment that lay on distant shores. When the emperor, at the behest of his courtiers, decided that maritime adventures were undesirable, there was not a murmur of protest from the public - they didn't know any better.

Contrast that with Portugal at the end of the 15th century. Granted, it was no democracy, but Henry the Navigator and his successors didn't have the almost total control over the lives of their people that Chinese emperors enjoyed. Besides, stories of the successes of the pioneering seafarers electrified the Portuguese people; wealthy merchants and ordinary folks alike believed (and were encouraged to believe by palace propaganda) that great prospects lay ahead of anybody who dared to sail to the East. Once the public appetite for adventure and wealth was roused, no European king could have banned adventuring.

That's why Europe succeeded where China failed. That's also why modern China could never turn its back on the world the way it did in the 15th century. It may still be a totalitarian state, and Jiang Zemin may, from time to time, seem to wield the power of the ancient emperors, but the Chinese people are no longer in the dark about the world outside. They have tasted the fruits of globalization, and nobody can turn them back.