Companies could save money by trying a four-day workweek, sharpening employee focus while providing more time for home life. Microsoft tested a four-day workweek for one month in Japan and discovered that productivity increased among sales staff by 40 percent. The experiment did not reduce pay, and every Friday in August was a paid holiday. Management also asked workers to communicate more over an online chat tool rather than use meetings and emails. Sales increased while paper and electricity use declined. “Microsoft Japan does not plan to make four-day workweeks a permanent fixture but it may use them from time to time,” reports Kazuaki Nagata for the Japan Times. “In a bid to eradicate Japan’s notorious corporate culture of long working hours, the administration of Prime Minister Shinzo Abe has been touting the importance of work-style reforms.” Despite long hours Japan’s hourly labor productivity ranks 20th among 36 OECD nations. More than 90 percent of the 2300 employees favored the four-day workweek. – YaleGlobal

Time off may increase employee focus: An experiment with a four-day workweek by Microsoft Japan boosted productivity of sales staff by 40 percent
Kazuaki Nagata
Saturday, November 9, 2019

Read the article from Japan Times about a Microsoft Japan experiment with a four-day workweek and the increase in productivity. 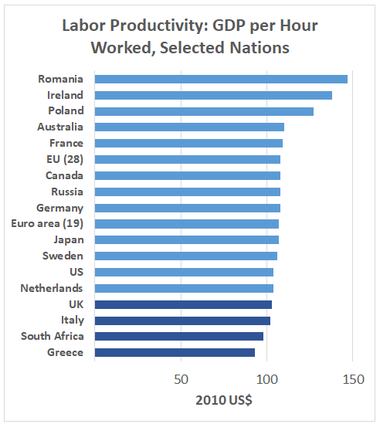 GDP per hour worked from the labor force is a measure of labor productivity, but does not reflect individual capacities, intensity of effort, capital and technology investments, or  economies of scale; the darker shade of blue reflects nations with productivity in decline from previous year for Greece, South Africa, Italy and the UK (Source: OECD, 2018, constant 2010 price and PPP)

Trade Is Not Bad For US Jobs

Tax Reform May Not Bring US Jobs Back

Booming US Growth in Question