Free Trade Has Enriched the World with More than Diverse Goods

Amid the rise in unemployment across the globe, trade is the oft-cited cause for the current malaise. Hence, according to populists, restricting trade should be the cure. But, Director for Trade Policy Studies at the Cato Institute Daniel Griswold says the populists have it wrong. If one really wants to help the poor, fostering trade is the key since it delivers the lowest cost staple goods that make up the bulk of the poor’s spending. Alternatively, if one wants to harm the poor, raising tariffs is certain to do the trick, as the poor pay proportionately more of their salary in import taxes than those at higher pay scales. Indeed, there are far more benefits from trade than not, including raising individuals above the poverty level while encouraging the growth of democracy and civil society through the spread of technology and communication. And while many argue that lower trade barriers leads to the loss of manufacturing jobs, Griswold points out that these losses have been more than offset historically by service-oriented employment. Finally, trade has helped to lower the incidence of war through easier access to natural resources. Heeding Griswold, it’s hard not to be “mad about trade” – the title of his recent book. – YaleGlobal

Free Trade Has Enriched the World with More than Diverse Goods

WASHINGTON: Tune in to cable TV, talk radio, or the blogosphere and you will soon be hit over the head with the message that free trade is destroying America. According to the economic populists on the left and right, the wages, jobs, and futures of Main Street Americans are being sacrificed daily to the gods of globalization.

On trade, as on so much else, the populists have it wrong again. Free trade and globalization are great blessings to American families. Trade is delivering lower prices and more variety to consumers, especially the poor, while creating better paying jobs for the middle class. Beyond US shores, the spread of economic openness is building a more peaceful, democratic and humane world for our children. 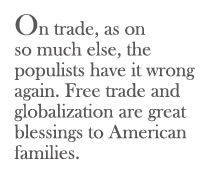 Now may seem an odd moment to tout the benefits of trade for Main Street America. After all, unemployment is nearing 10 percent, manufacturing is in a slump, and global poverty is rising. But those are all the result of the current recession, a downturn that was not caused by trade but by misguided monetary and housing policies that were “Made in the USA.”

During difficult economic times, import competition allows American families to keep their heads above water by delivering lower prices on staples such as food, clothing, and shoes. The prices we pay for goods exposed to global trade tend to rise more slowly than inflation or even fall. The expansion of product variety alone from trade delivers an estimated $400 billion a year in benefits to American families because of increased consumer satisfaction, according to a 2004 study by Christian Broda and David E. Weinstein for the National Bureau of Economic Research.

No consumers benefit proportionally more from trade than the poor, and nobody suffers more from existing trade barriers. The imported fresh fruit and vegetables, T-shirts and discounted sneakers sold at big-box retailers loom especially large in the budgets of poor and middle-class families. 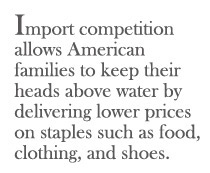 Perversely, the highest remaining US trade barriers are aimed at products that are disproportionately made by poor people abroad and consumed by poor people at home. The $25 billion the US government collects each year through import tariffs is the most regressive tax in the federal arsenal. According to a study by the Progressive Policy Institute, a single mother earning $20,000 a year pays a much higher share of her income for import duties than a manager earning $100,000 a year. Labor unions and other groups that oppose tariff-lowering trade agreements are unwittingly serving a status quo that is punishing the poor.

Despite what the populists tell us, the consumer benefits of trade have not come at the expense of jobs or wages. As a candidate for president in 2007, Barack Obama was echoing CNN’s Lou Dobbs when he told a cheering union crowd in Chicago that importing lower-priced T-shirts from developing countries was not worth the loss of jobs. “People don’t want a cheaper T-shirt if they’re losing a job in the process,” he said. “They would rather have a job and pay a little bit more for a T-shirt.”

Like most politicians, candidate Obama chose to represent a small but noisy special interest at the expense of the large majority of Americans. Only one-third of one percent of American workers are engaged in making clothing and textiles of any kind. That compares to the virtually 100 percent of Americans who buy and wear T-shirts and other clothing. If Americans are forced to pay higher prices because of import restrictions, a small number of jobs would be “saved” but at a huge cost to working families. 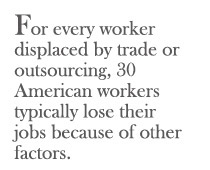 Across the entire US economy, trade accounts for a small share of job displacement. For every worker displaced by trade or outsourcing, 30 American workers typically lose their jobs because of other factors – most commonly technological change, but also domestic competition and changing consumer tastes. Think of the 30,000 workers at Kodak that have been laid off in the past five years, not because of imports, but because of the popularity of digital cameras and plunging film sales. My former calling, the newspaper business, has been hemorrhaging jobs since 2001, not because of unfair trade, but because of Craigslist and changing reader habits. “Job churn” is a fact of life in a dynamic, open economy.

A Big Lie of the trade debate is that we have been surrendering middle-class manufacturing jobs for low-paying service jobs. Since the early 1990s, the US economy has lost more than 3 million manufacturing jobs, but during that same period the economy has added 18 million service-sector jobs that are typically better paying. In fact, since 1991, two-thirds of the net new jobs created in US economy are in sectors such as health care, education, and business and professional service where the average pay is higher than in manufacturing.

Beyond American shores, falling trade barriers and the spread of technology have created a more prosperous, democratic, and peaceful world. Again, this may seem a counter-intuitive argument in the face of daily headlines about a global recession and ongoing violence in the Middle East and Africa, but here too we need to step back and assess long-term trends. 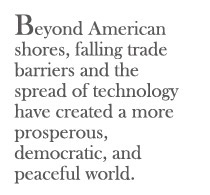 The past three decades of expanding trade and globalization have witnessed dramatic global progress. Between 1981 and 2005, the share of the world’s population living on the equivalent of $1.25 a day dropped by half, from 52 to 25 percent, according to the World Bank. In China alone, the number in absolute poverty fell by 600 million. During this same period, real gains have been made in life expectancy, infant survival, nutrition, and literacy. Child labor rates have fallen by more than half. It is not a coincidence that the most dramatic gains against poverty have occurred in those countries that have most aggressively opened themselves to the global economy.

Meanwhile, as a global middle class has emerged, so too have more democratic forms of government. Trade has spread tools of communication and spurred the growth of civil society as an alternative to centralized government. As a result, the share of the world’s population living in countries that respect civil liberties and the right to vote has climbed from 35 percent in 1973 to 46 percent today, according to Freedom House.

Fewer people are dying in wars today than in past decades, in large part because commerce has replaced military competition. Global commerce has allowed nations to gain access to resources through trade rather than conquest, while deeper economic integration has brought former enemies together and raised the cost of war. Even with the ongoing conflicts in Iraq and Afghanistan, young American adults living today are far less likely to fight and die in wars than their counterparts in the 1940s, ’50s and ’60s.

America and the world face daunting tasks today, as in generations past, but expanding trade is part of the solution, not part of the problem. Americans should have the same warm feelings toward free trade and globalization as they do toward iPods, email, online shopping, a well-fed child going off to school, and peace on earth.

Daniel Griswold is director of the Center for Trade Policy Studies at the Cato Institute in Washington and author of the new Cato book, Mad about Trade: Why Main Street America Should Embrace Globalization. Click here for the excerpt.