The Futures of NATO

The North Atlantic Treaty Organization began in 1949, with 12 members, to curtail possible aggression against Europe. NATO now has 28 members, and Jolyon Howorth, an expert on European security and visiting professor at Yale University, analyzes the alliance’s transformations since the fall of the Soviet Union. “In the 1990s, realists predicted NATO’s imminent demise, pointing out that no alliance in history had outlived the disappearance of the threat against which it was formed,” he writes. The alliance survived that transition as a high-level political agency for managing transatlantic relations and later as a regional crisis management agency, opening to former members of the Warsaw Pact and taking on more global responsibilities for security assistance after the 9/11 attacks. NATO’s members have been divided over new missions, from Kosovo to Libya. Likewise, the United States under Barack Obama and especially under Donald Trump has expressed concerns about burden-sharing with Europe. Paradoxically, increased NATO activity near Russia’s borders may have spurred Russian intervention in Ukraine, reviving NATO’s original role. As Europe explores strategic autonomy, Howorth concludes by recommending that Europe become more self-reliant, taking control of NATO, while the United States gradually steps back. – YaleGlobal

The Futures of NATO

NATO adapted to new roles since the fall of the Soviet Union, but must now prepare for Europe’s self-reliance
Jolyon Howorth
Wednesday, May 3, 2017

NEW HAVEN: As French philosopher and essayist Paul Valéry noted in 1937, “the trouble with our times is that the future is not what it used to be.” The sentiment applies to the North Atlantic Treaty Organization and a mission that’s been in a state of constant flux since the end of the Cold War.

NATO has transformed for at least five futures.

In the 1990s, realists predicted NATO’s imminent demise, pointing out that no alliance in history had outlived the disappearance of the threat against which it was formed. But NATO survived the 1990s as a high-level political agency for managing transatlantic relations. US proposals that the alliance should “go out of area or out of business” reflected a sense in Washington that payback time had come for 40 years of unconditional US security guarantees to Europe. Europeans in general balked at the idea of offering blanket support to US global strategy. NATO’s first post–Cold War future ended in deadlock.

Conflicts in the Balkans, 1991-1999, offered a brief second future for NATO as a regional crisis management agency, a profile encapsulated in the 1999 “new strategic concept” adopted at the 50th anniversary summit in Washington and best articulated, several days previously, by Tony Blair’s Chicago speech on the necessity of humanitarian intervention. In Bosnia (1995) and in Kosovo (1999), NATO conducted its first military operations, seemingly demonstrating that it could go “out of area” and put an end to ethnic cleansing. These operations proved controversial. An international commission of inquiry deemed the Kosovo campaign as “illegal but legitimate.” Moscow subsequently used the campaign as a precedent for Russian unilateral interventions in Georgia and Ukraine/Crimea. NATO’s first “shots in anger” rebounded awkwardly.

Meanwhile, a third future for NATO was devised in the mid-1990s with membership expanded to former members of the Warsaw Pact. This process, conducted in the name of a Europe “whole and free,” saw the alliance progressively advance to Russia’s borders. In 1997, George Kennan, the father of containment, denounced NATO expansion as “the most fateful error of American policy in the entire post-cold war era.” As Kennan predicted, Moscow’s reaction, especially under Vladimir Putin, has been robustly reactive.  In 2016, the eminent Russian and East European expert Richard Sakwa commented acerbically that “NATO exists to manage the risks created by its existence.” 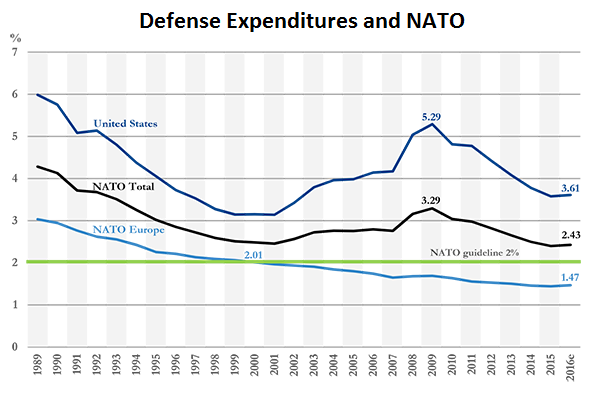 The 9/11 attacks provided a fourth future for the alliance. For the first time, the day after the twin towers fell, NATO invoked “article 5” – an attack on one member-state is an attack on all. The US response was initially ambivalent. The Pentagon, still furious at European leaders for vetoing specific bombing runs during the Kosovo war in the 1990s, had no desire to involve NATO in Afghanistan. Key allies UK and France were cherry-picked to assist.

But once the Bush administration switched its attention from Afghanistan to Iraq, the alliance as a whole was called into service and a fifth future was envisaged to stabilize the former while the US military focused on the latter. NATO took over the UN-mandated International Security Assistance Force, ISAF, in 2003. Almost by default, NATO had in effect “gone global,” thereby giving rise to the brief campaign from 2004 to 2008 to create a global alliance incorporating democracies like Japan, India, Australia and even Israel. During the 2008 election campaign, Republican candidate John McCain advocated NATO’s transmogrification into a “League of Democracies.” That idea, universally rejected by the European allies, fizzled along with McCain’s presidential bid. So, to all intents and purposes, did NATO’s brief experiment with “going global,” as the ISAF experience proved both politically divisive and a military failure. ISAF was disbanded in 2014, and NATO’s future seemed once again up for grabs.

Meanwhile, in 2011, the alliance engaged in a renewed experiment with humanitarian intervention and in mid-March launched “Operation Unified Protector” in Libya. This operation proved as controversial as the Kosovo mission and considerably more counterproductive. Exactly half of the NATO member states were politically opposed to the mission, with only a handful engaging in the airstrikes intended to protect the Libyan population from the predations of Muammar Gaddafi. In mid-April, the mission morphed from protection of the population to regime change, ensuring prolongation for six months until Gaddafi’s death in October. The spillover from this mission destabilized much of North Africa and the Sahel, galvanized radical Islamists from Nigeria to Syria, and precipitated Libya into a still ongoing civil war. Perhaps the most notable aspect of the Libyan operation was the explicit new posture of the United States – a key feature of what came to be known as the “Obama doctrine” – American “leadership from behind.”  European states were expected to take on the heavy lifting.

The notion at the heart of President Donald Trump’s initial assertion that “NATO is obsolete” is a variant on the Obama doctrine and one that goes back to the Cold War period: burden-sharing. The US complaint is that the Europeans are free-riding on American security guarantees and should be cajoled (Obama) or threatened (Trump) into stumping up more resources for their own defense.

This political standoff between Europe and the US has been rendered more complex by Putin’s actions. By annexing Crimea and intervening militarily in Ukraine and by appearing to threaten a number of NATO and EU member-states, particularly the Baltics, Putin has both thrown down the gauntlet to NATO and offered yet another, possibly its sixth, post–Cold War “future,” returning to its original role as a security trip-wire in Europe.

A complexity surrounding this sixth “future” for NATO is that the Europeans have been developing their own “autonomous” security project, the Common Security and Defense Policy.  This was sparked in the 1990s both by European aspirations to become a global actor and by American pressure for the EU to take over responsibility for the stabilization of its Eastern and Southern neighborhoods. That pressure, growing in intensity over the past two decades, has become strident under Trump. This is not just a political football. Many leading US international relations academics have, in recent years, argued a strong case for progressive US disengagement from NATO, accompanied by concomitant European assumption of command responsibilities within the alliance. Libya showcased America’s “leading from behind.”  In a context where the US sees its primary security challenges in the Asia-Pacific region and in the Middle-East and where Europe faces challenges essentially in its own neighborhood, NATO’s status has become a major geostrategic conundrum.

In June 2016, the European Union published a document outlining the European Global Strategy. The objective is for the EU to achieve “strategic autonomy,” while at the same time engaging in ever closer cooperation with NATO. While the document says little about the implementation of these seemingly contradictory projects, the way ahead seems clear. Europe does not need two rival security entities in its relatively limited geographic space. EU-NATO cooperation, in my view, should lead, over the next decade to the Europeanization of NATO. Under this schema, Europe would achieve strategic autonomy through its progressive apprenticeship in leadership via NATO, and the US could reduce its footprint in the alliance and concentrate on strategic challenges elsewhere.

General Dwight D. Eisenhower said at the time of NATO’s creation in 1949: “If NATO is still needed in ten years, it will have failed in its mission.” Perhaps in 2029, its 80th anniversary, NATO can declare “mission accomplished” when Europeans become entirely self-reliant in security terms. That was the initial intention of NATO’s founding fathers.

Jolyon Howorth has been a visiting professor of political science and International affairs at Yale since 2002, dividing his teaching among the Political Science Department, the Jackson Institute and Ethics, Politics and Economics. He has published extensively in the field of European politics and history, especially security and defense policy and transatlantic relations – with 15 books and more than 250 journal articles and book chapters. He is the Jean Monnet Professor of European Politics and Emeritus Professor of European Studies at the University of Bath.

France-Amérique: NATO and the Trump Enigma

Nato and Russia – In Search of Dialogue

So the author proposes the U.S. leave NATO and let the EU take over European security. The problem with the EU -- a bunch of bureaucrats with no true political clout -- is that military forces are traditionally a characteristic of nation states, reflecting the loyalty and obligations of their populaces. There is no NATO, actually; there are only NATO countries that consult with each other and compare and coordinate their national forces. NATO is otherwise just a building with a staff to provide meeting rooms. They work by consensus -- does the EU? The U.S. has gained a historic security connection to Europe. Why end it? By the way, the U.S. GDP for defense is for global pretentions. Its GDP for Europe defense is something like 0.2-0.4 percent. And which is stronger? EU's 3 percent of GDP for deficits, or the silly 2 percent for NATO?

"The U.S. has gained a historic security connection to Europe. Why end it?" you ask. Don't you think the answer lies in your own assertion: "military forces are traditionally a characteristic of nation states, reflecting the loyalty and obligations of their populaces." Why would the US state and populace want to be bogged down in a conflict in Europe especially when more direct threats might be emanating from the Middle East or Asia Pacific? But you are right that it is difficult to believe that EU can take charge of NATO or some variant of NATO particularly at this moment in time.

NATO is a creature of another time. Now NATO countries are aging. They need to retrench and stop being aggressive.

US cannot provide guidance as in denial about the consequences of aging Boomers.