The G-20 and the Future of Capitalism – Part I

The world’s eye will be on the summit of the Group of 20 meeting in London on April 2. As the member nations – from Argentina to the United States – represent 80 percent of world trade, their decision will have an immediate and direct bearing on the global economic recession roiling the world. Doubts and anger emerge in nations that have long embraced capitalistic principles and free and open markets. The first article in this three-part series, from Yale University trade and international finance Professor Jeffrey Garten, uses the device of an imaginary summit communiqué to offer his pessimistic assessment of the outcome of the summit where presidents and prime ministers gathered in London respond to the crisis with platitudes and procrastination. This YaleGlobal curtain-raiser series cautions that finding agreement on global strategies could be hampered by the temptation to engage in multiple and scattershot attempts aimed at protecting highly selective parochial interests, rather than the broad reform that promotes global transparency and sustainable growth. – YaleGlobal

The G-20 and the Future of Capitalism – Part I 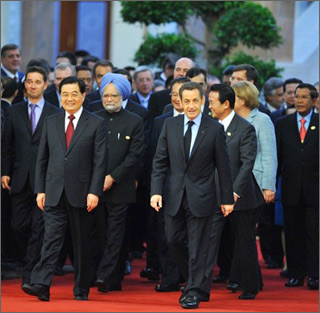 Heading towards deadlock: The G-20 meeting in London has one agenda, but divergent solutions

LONDON: At the April 2 summit of the G-20 in London, civil servants will need to apply all of their vaunted diplomatic talent to drafting summaries of the event.

But suppose that, for once, they didn’t try to paper over the real differences among the participants and instead substituted brutal frankness for the usual euphemisms. If they did, here is what the final G-20 communiqué might look like:

We met amidst severely adverse conditions – including a global banking crisis, deepening worldwide recession, shrinking trade and investment, rising unemployment and mounting political tensions. None of us know the stage of the crisis: Were we at mid-point or near the end? Will the storm last another few quarters or years?

We don’t have a clue. 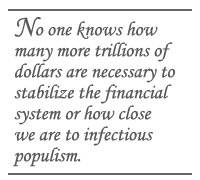 Nor does anyone know how many more trillions of dollars are necessary to stabilize and revive the financial system, nor how close we really are to infectious protectionism and out-of-control populism. And some of us feel that capitalism itself is under threat.

As a result, we took nearly a full day out of our schedules to solve these issues, although some key participants, such as President Barack Obama and China’s President Hu Jintao, met the day before at the bilateral sessions.

Our biggest accomplishment was agreeing that the International Monetary Fund needs substantial new funds. We talked about alternative funding vehicles, but couldn’t agree and ultimately left the details to a working group to refine by June. The discussion was difficult: Led by Indonesia, several developing nations said no country with any self-respect would take IMF funds after the humiliations experienced during the 1997-98 Asian crisis. Be that as it may, said the European Union representative, Hungary and others in Eastern Europe have no choice but to take IMF money, with little coming from their Western European partners. China registered a caveat: It would contribute to the IMF only if the voting structure changed, with more power given to the big emerging nations – a major change that could take many months. 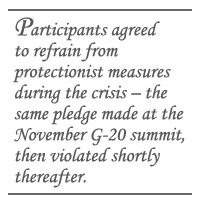 Progress was made on trade. The participants agreed to refrain from protectionist measures during the crisis – after admitting that they had made the same pledge at the first G-20 summit in November, and that 17 nations violated it days afterwards. Then the US insisted that its Buy America provisions should be exempted, as should tariffs on imports that were not sufficiently “green”; Britain demanded the same carve-out for its financial protectionism; and China claimed a sovereign right to promote exports anyway it could. France suggested that the pledge be effective as of six months from now, so that any measures taken before could be grandfathered in.

Brazil proposed that the G-20 push to reignite enthusiasm for the Doha global negotiations, but no one responded. During the awkward silence, President Obama fiddled with his BlackBerry. All agreed to revisit this issue at a later time.

The discussion on bank rescues was disjointed. Obama asked for patience while the US plan was tried. A few eyes rolled. A number of European leaders talked excitedly about capping executive compensation at the top civil-service payment levels. After China suggested that a mission be mounted to Beijing to study how a banking system should function, Prime Minister Gordon Brown anxiously moved on to the next item. 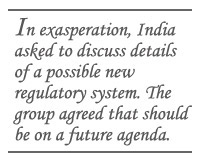 The discussion on global financial regulation did not go so well. German Chancellor Angela Merkel took a swipe at Obama, suggesting that the EU intended to expand regulation to every sliver of the financial system and that the US had better get with the program. The French president joined in, suggesting that that the US had started this mess with lax regulation and that Anglo-American capitalism needed to be shackled, once and for all. Obama, who had yet to mediate regulatory issues at home among the Federal Reserve, Treasury and Congress, warned against hasty moves. In exasperation, India finally asked to discuss details of a possible new regulatory system, and the group agreed that should be on a future agenda.

The discussion on need for more fiscal stimulus was confrontational. The US, halfheartedly joined by Japan, said that Europe should do more. Under no circumstance, said Obama, would America accept a highly disproportionate burden of global stimulus, thereby giving everyone else a free ride. Merkel countered that the US had unleashed the global financial virus and should supply most of the medicine. Turkey eventually saved the day by suggesting that countries pledge to do what was necessary, and all agreed this was an appropriate response

Brown then asked the group to focus on macroeconomic issues, pointing out that a major cause of the crisis – perhaps the most fundamental one – was massive trade imbalances between the US and China, with Americans overspending and Chinese oversaving. He asked how the world could correct its dependence on the overburdened American consumer and put more onus on the Asian consumer. Obama assured the group that he and China’s President Hu Jintao would handle this issue in their bilateral meeting later that day. Brown asked the two to report back to the G-20 with generated ideas. No report was ever made. 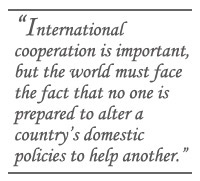 Of great significance was discussion during coffee breaks. India and Saudi Arabia could be heard talking up the virtues of a closed financial system. Prime Minister Vladmir Putin explained to Obama how to make Wall Street tycoons disgorge their bonuses. Worried about the prospects of its massive dollar reserve losing value, China huddled with South Africa and Argentina, explaining why it made sense for the IMF to take the advice of John Maynard Keynes and create an international currency to replace the greenback as the world’s central currency. Merkel confided to her Canadian counterpart that she felt the G-20 was “an unwieldy monstrosity”: If the G-7 couldn’t accomplish anything, how would adding 13 countries help?

Towards the end of the meeting, Obama summed up what he had heard: “International cooperation is important, but the world must face the fact that no one, including the US, is prepared to alter a country’s domestic policies to help another.” Brown pleaded for a more positive statement and formulated this proposition: “International cooperation was important, and we should strive to do more of it.” At this point, Nicolas Sarkozy offered an idea: Why not give the world a sense of momentum by scheduling a follow-up meeting in Paris? Other countries then made competing offers to host the meeting. A date was set – July 10 – but it was impossible to agree on a location so a special committee was appointed to select the location.

The meeting adjourned with a self-congratulatory round of applause.

Jeffrey E. Garten is the Juan Trippe Professor of international trade and finance at the Yale School of Management and held economic and foreign policy posts in the Nixon, Ford, Carter and Clinton administrations.