The G-20 and the Future of Capitalism – Part III

In the third part of our series on the G-20 and the Future of Capitalism, Berkeley economics professor Pranab Bardhan suggests perhaps much to the chagrin of its naysayers, capitalism is here to stay. But chastened by the crisis, it is likely to take on a much milder form. Financial asset growth will slow; producers rather than traders will resume precedence; and financial regulation will increase, though only marginally. What will remain unchanged are the advances of technology and the bargaining power of capital over labor. Being more mobile – and hence better able to exploit global opportunities – capital retains the credible threat of withdrawal. But protectionism is likely to abate as all members of the supply chain realize how long that chain is and how it is in their self-interest not to let it be broken. Social protection could improve as a form of competitive advantage, potentially resolving the battle between technology and demography. China and India, which, he maintains, are wrongly trumpeted as export nations in the press, will maintain their growth at albeit lower levels precisely because such growth has been fueled domestically. In the end, capitalism remains surprisingly resilient despite its sullied reputation. And that resilience should allow capitalism to persevere provided government’s visible hand tames its excesses. – YaleGlobal

The G-20 and the Future of Capitalism – Part III

For all its inequity, instability and immorality, a chastened capitalism is here to stay
Pranab Bardhan
Friday, April 3, 2009 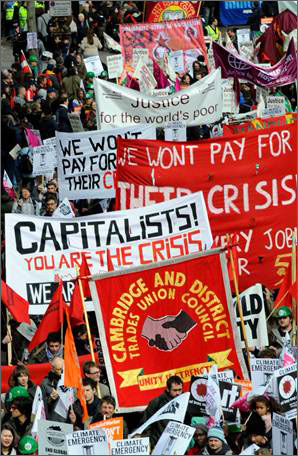 Capital test: Demonstrators in London know where the blame lies and they will have none of it

BERKELEY: As the signs of a deep global recession proliferate, the tone of public commentators and editorial writers on the state of global capitalism is turning apocalyptic. As some question, are we witnessing the end of capitalism as we knew it?

The speed and depth of the damage done in terms of loss of capital value, homes, and jobs as well as the magnitude of capital infusions and government stimuli boggles the mind. Some bemoan the possible demise of a system that in the last few decades produced unprecedented amounts of wealth and lifted many out of poverty in the far corners of the world. Others feel vindicated that after many years, their dire warnings of the risks associated with global capital concentrated in a few hands rang true. These dissenting voices hope that an alternative system, more just and less unstable and community-disrupting, will rise from the ashes.

While the search for such an alternative system that can combine justice and stability with sustained incentives for innovation and respect for individual human rights has eluded mankind for the better part of the last two centuries, one may be on firmer ground in predicting the emergence of only a somewhat modified form of global capitalism in the years to come. My crystal ball is just as cloudy as anybody else’s: No one knows if it will be a “lost decade” or a lost couple of years, but looking beyond the current storm in at least the medium run, certain features of change and in some cases lack of much change are likely to draw attention.

Many people believe that the explosive growth of financial capitalism, way ahead of the real economy – global financial assets were more than three times the value of world output in recent years – will be somewhat tamed now. In the constant search of leverage and undervaluation, the introduction of a whole range of complex financial products and investment vehicles that enhanced the opacity of risk packages in the name of financial innovation will be slowed. There is a general outcry that for too many years the system has been hijacked by an overweening financial oligarchy that got away with compliant monetary policy, lax credit standards and crony credit-rating agencies. It is likely that there will now be a discernible movement back to producers from traders and arbitrageurs. 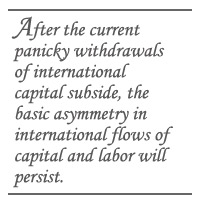 Despite widespread calls for greater international financial regulation, I do not, however, expect more than marginal tinkering, except some enhancement of resources at the disposal of the International Monetary Fund, some minor coordination in the case of banks owning foreign assets and some mild harmonization of taxes. Most regulatory tightening is likely to be at the national level. At that level, the national diversity in the balance of power between industrial and financial capital, between management and large shareholders, and that between capital and labor will shape the variations in regulation.

The ramifications of the spectacular technological advance in communications and 24-hour trading in the financial world will linger; but most policymakers, not just the “born-again Keyenesians,” will be wary in assuming that the market is sufficiently self-correcting in coping with those ramifications.

After the current panicky withdrawals of international capital subside, the basic asymmetry in international flows of capital and labor will persist – with substantially more constraints, cultural as well as legal, on labor. Hence, capital’s threat of exit will remain more credible. This asymmetry will continue to weaken the bargaining power of labor, notwithstanding the muscle-flexing by American trade unions under a more friendly administration in Washington or the street demonstrations in Paris. The conflicting interests of skilled and unskilled workers will continue to weaken the union movement, whereas the recession may actually bring about more consolidation of capital, strengthening it further. The labor share in national income in most countries may not thus show much improvement, and this will particularly be the case if the nature of technological progress continues to be skill-biased. 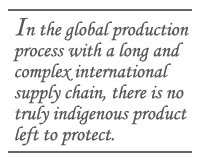 As in all deep recessions the pressure for economic nationalism and trade protection will mount, but compared to the past it cannot go very far now: In the global production process with a long and complex international supply chain, there is no truly indigenous product left to protect, and with components coming from all over the world labels like “made in USA” have lost much of their meaning. Even unskilled workers may soon see that protectionism is like shooting oneself in the foot – if you restrict free trade, you may no longer have the components and materials on which to ply your own trade.

However, the demands for social protection of workers will strengthen, backed in many cases by domestic business interests competing with businesses in other countries that have more state-funded worker protection. We already see this happening in the changing support base for universal health care. The main structural constraint on the increased provision of social protection will be the battle of demography against technology – the ever-growing needs of an aging population against the surplus generated from the innovation capabilities of the young.

Capitalism (not necessarily in its Anglo-American form) will keep on thriving in China and India, though at a less frenzied pace in the immediate future. In any case, contrary to repeated assertions in the financial press, much of their high growth in the last quarter century has been driven by mainly domestic factors. Even at the height of global expansion of trade in the period 2002-07, the increase in net exports contributed only about 15 percent of total real GDP growth in China in that period. Over the last year Chinese exports have fallen from their dizzying heights, and this has caused sizeable job losses in some coastal provinces. But much of the exports from China, as well as India, involve processing of imported materials, and so the net loss in value added is not as large as the gross export figures suggest; in value added terms the high Chinese export to GDP ratio in recent years was about half of the usually reported gross ratio. 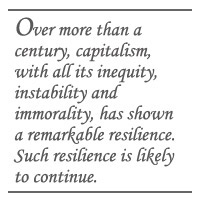 Also, the jobs in the export sector have been relatively small in terms of the total size of the labor force in both countries, more so in China than in India. China also has lot more financial resources to boost consumer demand in the short run and strengthen the social safety net for workers and peasants in the long run. The near-universal healthcare announced as part of the stimulus program, if implemented, will serve both of these goals. High savings in both China and India, not just their stringent regulations and government ownership of banks, have given them relative insulation from external financial contagion.

Smaller developing countries, more dependent on exports, foreign capital and remittances, will suffer much more. There may be increased political instability in some of these countries, as has been the case in earlier large macroeconomic shocks, but this will not make much of a dent in the global capitalist system.

Over more than a century, capitalism, with all its inequity, instability and immorality, has shown a remarkable resilience. Such resilience is likely to continue, but only if politics at the national level can tame capitalism’s excesses and mobilize its surplus to strengthen social protection.

Pranab Bardhan is professor of economics at the University of California, Berkeley, and co-chair of the Network on the Effects of Inequality on Economic Performance, funded by the MacArthur Foundation. He was the editor of the “Journal of Development Economics” for many years.