Global questions of political economy have traditionally revolved around sharing public goods or dealing with crises. Today, however, the world must decide how to distribute the costs of tremendous challenges that are looming over the horizon. Joergen Oerstroem Moeller, visiting senior research fellow with the Institute of Southeast Asian Study, anticipates the world to be buffeted by the magnitude of global warming, inadequate food production, water shortages and scarcity of some minerals. These challenges will lead to, at best, higher prices for food and other crops or perhaps even violent conflict. If the ideal of equity is to be honored and a practical solution implemented, Moeller suggests, these costs must fall in proportion to a country's ability to pay. – YaleGlobal

Environmental changes will cost the world big – it's time to figure out how to split the bill
Joergen Oerstroem Moeller
Friday, October 19, 2007 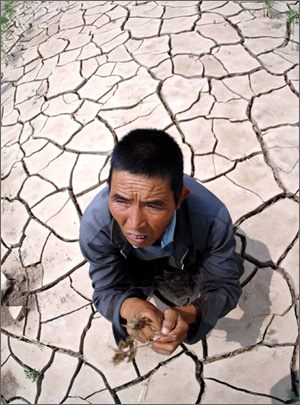 Looking to the heaven: A farmer squats on his cracked cropland in China's

Gansu province. Help has to come from the rich

SINGAPORE: The cards are on the table; the world is warming up to the most brutal economic confrontation seen in many decades, perhaps centuries.

Simultaneously, four issues require answers. All have severe repercussions for distribution of global income, and in all four cases, the solution, if any, will reverberate through the global economy, reallocating economic power and political clout: global warming, rising agricultural prices, water shortage and, probably, but less certain than the other three, rising raw material prices, in particular oil. 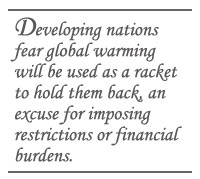 Almost everybody agrees that something must be done to stop or, if possible, roll back global warming. Unfortunately there is corresponding disagreement on how to do it and who should pay the bill. The rich countries are the worst sinners, but the growth rate for emissions is manifold higher in newly industrialized countries, blurring the game. The rich countries grudgingly admit that the largest burden is on their shoulders, but their willingness to pay is a far cry from the expectations among the less rich countries. Developing nations fear global warming will be used as a racket to hold them back, an excuse for imposing restrictions or financial burdens. Hardening this standoff is a global shift of competitiveness in favor of newly industrialized countries; established manufacturing countries are wary of repercussions on competitiveness and dread surrendering control over the global economy to newcomers like China and India.

Economists float the idea of selling rights to emission targets. In theory, it looks fine. Certificates are put on auction, and firms win the right to "pollute" with the highest bid. If we accept the principle of the market mechanism, the highest bids should come from those representing the largest purchasing power, guided by the invisible hand.

But this is a misleading description. Such mechanisms favor existing industries with capital to make the highest bid. The blunt fact is that the plan would preserve industrial structure, complicating any reallocation of production among countries. The rich countries and their industries possess the capital to bid and would win auctions and the right to produce. Emission ceilings would constitute a barrier for rising production in the less rich countries, freezing the world's economic structure for a long time. The plan would reverse traditional policy of helping infant industries with temporary measures to overcome initial hindrances. In theory, the playing field is level; in practice, it's skewed in favor of established producers. 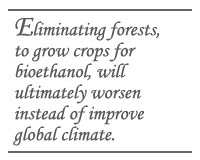 Another proposal - converting agricultural land or forests into crops suitable for bioethanol - has similar flaws. Two are obvious: First, converting forests risks elimination of large forest areas, wiping out the "lungs" of the world, ultimately worsening instead of improving global climate. This can be seen in Southeast Asia where a country like Indonesia has embarked upon such a course to produce palm oil. Second, an inevitable consequence of increasing bioethanol crops is a decrease in agricultural products.

The world is already on a collision course for rising food prices, favored by very few. As formulated recently by Lester R. Brown of the Earth Policy Institute before the US Senate Committee on Environment and Public Works, a contest is underway between 800 million people sitting behind a wheel in their car, many obese, and 2 billion people who struggle to make money for their daily food, many malnourished.

The UN forecasts that in 2016, less than 10 years from now, people in developing countries will eat 30 percent more beef, 50 percent more pork and 25 percent more poultry. Such production requires increasing inputs of grain, even as the world's stocks are at the lowest levels in 30 years. This equation can be solved only by steeply rising prices for grain and meat.

Global warming changes the pattern of food production; many of the well-known food- basket areas will be subject to climate change, dramatically modifying the production outlook. Even with cases of large countries spanning several climate zones, agricultural production will likely not take place in the same locations, calling for investment, mobility of labor and new infrastructures.

Water shortages, irrespective of global warming or not, aggravate this dismal picture. China, already threatened by water shortages, confronted a choice on allocating water to rural districts and cities. Apparently urbanization and industrialization won out, and the obvious consequence is China has been a net importer of food since 2004. Over the last year or so, drought in Australia has emptied the country's most propitious agricultural areas.

The water shortage may, like other shortages, be solved by higher prices, which would lead to higher food prices. In some cases where rivers flow through several nations - the Mekong River, the Jordan and the Nile - nasty negotiations about water rights may destroy prospects for regional cooperation and, in some cases, lead to armed conflict.

The fourth factor, rising raw material prices, is less certain. Manufacturing increasingly demands more input, but technology diminishes input per unit of any final product. The same trend can be seen with oil: Higher energy efficiency and switching to other sources may stop further price increases. No one knows for certain the impact of rising manufacturing versus more efficiency, but newly industrialized countries offer tremendous potential for savings per unit. As a rough estimate, China has improved its energy efficiency three times since 1980, but still has one third of the efficiency of the US and one fifth of Japan's efficiency. India figures are a bit lower than China's, but improve at a slower pace. (India is slightly more efficient than China)

All in all, this augurs a major shift in political power and economic clout. Burden sharing will move to top spot of the global agenda. All nations will attempt to emerge from this "battle" by shifting the burden to other nations. Not all can be winners. National delegations will mobilize political and, to a certain extent, military power to show the other side that there is much to lose.

There will be two obvious losers: First, poor people primarily in developing nations, but also in the US, struggling to foot daily bills. The increasing inequality within nations, visible for the last two decades, will be deeper, aggravating social and political tensions. Questions from the poor about benefits flowing to them from economic globalization will grow louder, sharper and bitter. The second group is nations with agricultural production in one of the climate zones no longer suitable for agricultural production. Several major food producers are already fragile, vulnerable to even small alterations in temperature or rainfall. 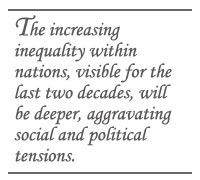 This ugly fight will continue for the next decade, maybe longer. It may overshadow many present conflicts and create new ones. Confrontation between established and rising powers over rights to use resources will last for a foreseeable future - the rest of this century, maybe longer. Compared with similar transitions of power from established powers to rising powers - the UK to the US, the German challenge in the first part of the 20th century - this distributional fight revolves around shortages regarding food, water, clean air and maybe raw materials. Hitherto, we witnessed distribution of benefits, now we face burden sharing.

It is the first time in history that the world confronts a battle over income distribution. Transferring the burden to a group of underdeveloped countries, as was so convenient many times over the past centuries, cannot solve the equation.

The stakes are staggering.