As a growing number of countries flirt with nuclear capabilities, it may be time to reconsider the effectiveness of the current arms-control doctrine. Political scientist Ramesh Thakur asserts that the inconsistencies in the application of non-proliferation policy, as developed by the US and the other four Security Council members, may bring about its collapse. The five nuclear powers, argues Thakur, undermine their stated objective of preventing the spread of nuclear weapons by treating them not only as a currency of power, but even as devices usable for tactical purposes. The failure to practice what they preach may implicitly encourage other actors – be they ambitious states or rogue groups – to pursue weapons development. Total disarmament, as Thakur suggests, may be the only effective approach. – YaleGlobal 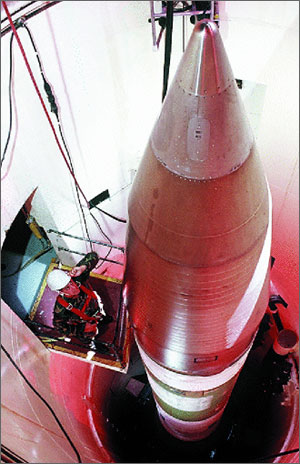 Nuclear weapon in the US arsenal: Lowering the threshold of their use weakens the taboo against them

TOKYO: Unbeknownst to the South Korean government, a group of "rogue scientists" has taken steps toward nuclear weapons production; this news from Seoul is the latest sign of a growing danger. The non-proliferation regime, which - until recently - succeeded in controlling nuclear weapons dissemination, is under severe strain. Already reeling from the defiance of India and Pakistan, both of which blasted their way into the Nuclear Club, the non-proliferation regime may die from a thousand cuts. The blame for the deterioration, however, does not lie exclusively with rogue nations or rogue scientists; the true culprit is the widespread fundamental disregard for the main task of non-proliferation: eliminating the nuclear threat altogether.

The latest revelation, as well as news of similar attempts by countries such as Libya, Iran, and Saudi Arabia, requires the world to take a cold look at reality and consider how best to avoid a non-state nuclear breakout. In order to prevent an unthinkable catastrophe, the nuclear powers would have to consider what so far has been the unacceptable step: total disarmament. 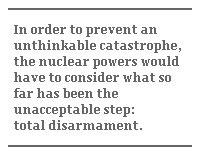 The South Korean experiment with nuclear weapons clearly results from a failing non-proliferation policy. North Korea, for instance, has openly challenged the international community and, thus far, has been successful. Others, like Israel, India, and Pakistan, have also gotten away - albeit with temporary sanction.

The US, having looked the other way when Israel quietly developed its nuclear weapons, has retreated from a series of arms control and disarmament agreements, including the antiballistic missile, nuclear non-proliferation, and comprehensive test-ban treaties. The dismissive attitude toward global regimes is echoed in unilateral changes in US doctrines, allowing for use of tactical nuclear weapons. Previously, their use was unimaginable except against nuclear enemies; today, the US justifies nuclear weapons as counters to all "weapons of mass destruction," including bio-chemical weapons.

Such doctrinal spread may have unhappy consequences for proliferation, for the calculus of potential proliferators is bound to change in response to the new doctrine. It is not possible to convince others of the futility of nuclear weapons when possession and doctrines of use prove their utility for a self-selected few. Lowering the threshold of their use weakens the taboo against them and, thus, inevitably lowers the normative barriers to nuclear proliferation. 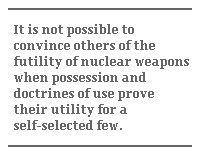 But this in itself is now less worrying to Washington. For yet another effect of 9/11 was a dramatic shift in concern from universal to differentiated nuclear proliferation. Previously, the Non-Proliferation Treaty (NPT) was the centerpiece and embodiment of the non-proliferation norm. This is why sanctions were imposed on India and Pakistan for their nuclear tests in 1998, even though neither had signed the NPT.

The current US concern does not relate to the NPT, but rather, it stems from the proliferators' relationships with Washington. Since Sept. 11, even India and Pakistan have been removed from the list of countries of concern. (Indeed, Pakistan has now been designated a major non-NATO ally.) The US has instead concentrated its attacks on the "axis of evil" countries, who - unlike India and Pakistan - are hostile to the US. Further, the concern is no longer limited to state proliferators, but extends much more broadly to non-state groups and individuals, especially those who might some day contemplate acts of nuclear terrorism.

This is the true meaning of the Bush promise: The US will not allow the world's most destructive weapons to fall into the world's most dangerous hands, as judged solely and unilaterally by Washington. Therein lies the logic of American doctrine of preemption; if necessary, hit the enemy well before it is able to attack.

In turn, this changes the basis of world order as we know it – and that might be the most profound and long-lasting significance of 9/11. How can the most prominent dissident in many global norms claim to be the world's most powerful enforcer of those norms? The answer lies in a conception of world order that ignores the framework of "sovereign equality" adopted since the Treaty of Westphalia (1648). This also explains why some of today's most potent threats come not from the conquering states within the Westphalian paradigm, but from failing states outside it. In effect, Bush is saying that the gap between the fiction of legal equality and the reality of power preponderance has stretched beyond the breaking point. Washington is no longer bound by such fiction. The Bush administration insists that the US will remain a fundamentally trustworthy, balanced, and responsible custodian of world order – but of a post-Westphalian order centered on the United States.

It would be wrong to single out only the US. By what right do the five unelected members of the Security Council claim a permanent monopoly on nuclear weapons? It defies history, common sense, and logic to believe that a group of five countries can keep a permanent monopoly on any class of weaponry. The non-fulfillment of treaty obligations – Article 6 of the NPT (1968) requires negotiation of total nuclear abolition – weakens the efficacy of the antinuclear norm in controlling the threat of proliferation.

The five permanent members of the UN Security Council, who also happen to be the five nuclear powers, must resort to measures of coercion ranging from diplomatic and economic to military. But relying solely on coercion with little basis on norms (morality) and treaties (legality) gives rise to fresh problems.

First, such a dramatic deterioration of the security environment hardens the "rogues" determination to check potential US armed attacks by acquiring lethal weapons. Just as Iraq's emergence as a terrorist hotbed became a consequence (rather than a cause) of war, so too may nuclear weapons proliferation: Some countries may conclude that only nuclear weapons can deter Washington from unilateral wars of choice. Thus, as Washington throws off the fetters on the unilateral use of force and the universal taboo on nuclear weapons, it strengthens others' attraction to those weapons – all while simultaneously weakening the restraining force of global norms and treaties.

Second, the reality of contemporary threats gives rise to significant gaps in the legal and institutional framework designed to combat those threats. For instance, a virtual nuclear-weapons capability existing inside non-proliferation regimes may be executed before international organizations can react defensively. Nonstate actors, another credible threat, remain outside the jurisdiction and control of multilateral agreements whose signatories are states.

Recognizing this, a group of like-minded countries launched a Proliferation Security Initiative to interdict air, sea, and land cargo linked to WMD. Its premise is that the proliferation of such weapons deserves to be criminalized by the civilized community of nations. The initiative signifies a broad partnership of countries that, using their own national laws and resources, will coordinate actions to halt shipments of dangerous technologies and materiel. It also signals a new determination to overcome an unsatisfactory state of affairs and may, therefore, act as a deterrent.

Ultimately, however, the logic of nuclear non-proliferation is inseparable from the logic of nuclear disarmament. Hence, the axiom of non-proliferation: As long as any one country has them, others, including terrorist groups, will try their damnedest to get them. The only way to keep nuclear weapons out of the hands of nasty groups is to remove them from the hands of governments.

Ramesh Thakur is senior vice rector of the United Nations University in Tokyo (Assistant Secretary-General, United Nations). These are his personal views.