The world remains divided about the best way to respond to extremism – fierce military retaliation versus controlled anger that focuses on diplomacy, tolerance and the power of example. This two-part series examines the viability of two responses: Israel’s fierce invasion of Lebanon after the kidnapping of two soldiers and India’s restrained reaction after train bombings in Mumbai that killed more than 200. After more than 30 days of fierce fighting, a UN ceasefire finally stopped the battle in Lebanon. The US and Israel must regroup, not for military combat, but to consider how to negotiate with groups like Hezbollah that empower disadvantaged Muslim citizens, contends Fawaz Gerges, a scholar on the Middle East, in the first article of the series. The organization may have radical goals, but also provides social services and political direction for more than a million people. Violence, destruction of infrastructure and civilian deaths along the Lebanese-Israeli border only strengthened Hezbollah’s standing in the Muslim world, ensuring ample recruits in the years ahead. – YaleGlobal

It’s a mistake to brand a political party with social services, like Hezbollah, solely as terrorists
Fawaz A. Gerges
Tuesday, August 15, 2006 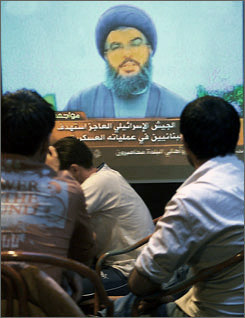 Larger than life: Hezbollah leader Hassan Nasarallah has emerged as the new hero from the ruin of southern Lebanon

NEW YORK: Now that guns have fallen silent in Lebanon and the hard part of maintaining peace has begun, it is time for Israel and the US to reconsider their view of Hezbollah. Hezbollah, or the Party of God, cannot be eliminated militarily, nor is Lebanon just another front in the war on terror, as US President George Bush tends to believe.

In the first place, Hezbollah is not just a militia or conventional army, but a social and political movement deeply rooted in its society, with a big constituency within the Lebanese Shia community that comprises about 40 percent of the country's 4 million people. Hezbollah organizes a welfare system providing schools, clinics, daycare centers and jobs to hundreds of thousands of poor Shia.

Equally important, Hezbollah provides the Shia community, historically disadvantaged and marginalized in Lebanon, a sense of identity and a source of pride. Israel’s military targeting of Shia will deepen feelings of victimization among Shiites and turn them – even further – against Israel and the West.

Liberal Shia were once vehemently critical of Hezbollah’s extremism. In conversations I had in Beirut in the last two weeks, I was surprised by liberal Shia’s defense of the radical organization against its critics. “This war is targeting all Shia, not just Hezbollah,” a progressive Shia female journalist told me last week.

Second, Hezbollah is falsely portrayed by Israel and its friends in the US as a rotten tooth that can easily be plucked out – a terrorist organization that must be wiped out. In fact, Hezbollah is a pivotal political player on the Lebanese landscape. More than a million men and women vote for its candidates in elections. The radical organization is part of the Lebanese political landscape, and there is real dialogue to integrate Hezbollah paramilitary apparatus fully into the army and resolve its dual status.

Hezbollah has two ministers in the cabinet, 14 seats in Lebanon's 128-seat parliament, and a large base of support in the Muslim world.

Third, since the early 1980s Hezbollah has proved itself on the battlefield against Israeli military might. By 2000 it forced Israel to withdraw under fire from a small strip of land in southern Lebanon. This time, after more than three weeks of fighting, Hezbollah proved resilient.

The root causes of the Israeli-Hezbollah confrontation lie in the unresolved Arab-Israeli conflict and stalled peace process. It is unrealistic for Israel to think that it can destroy Hezbollah for good.

Hezbollah leaders made a monstrous miscalculation by kidnapping two Israel soldiers. At most, they had expected a couple days of armed skirmishes and aerial bombings in southern Lebanon but not the all-out war unleashed by Israel. The dominant sentiment was that Hezbollah was too powerful in Lebanon, and that Israel would not dare take the pro-Iranian revolutionary organization head on. Senior Hezbollah leaders subsequently acknowledged that they had not expected Israel to launch all-out war, according to deputy head of Hezbollah’s political bureau, Mahmoud Qomati.

By the third week, Israeli leaders had scaled down demands, recognizing the cost in setting the bar too high in the struggle. The leader of Hezbollah, Sayyed Hassan Nasrallah, speaking on the party’s TV station Al-Manar, reassured supporters that Israel has not made a “single military target” and insisted that he would not accept a “humiliating” settlement. Nasrallah, stern and wearing his trademark black headdress, warned Israel: “If you bomb our capital Beirut, we will bomb your capital – Tel Aviv.” But he also offered an olive branch: “Any time you decide to stop your aggression on our villages and towns and cities and our civilians, we will not fire rockets on any Israeli settlement or city.”

In terms of structure, organization and goals, Hezbollah resembles the Irish Republican Army. Above all, Hezbollah possesses a viable social constituency and has no fear of recruits drying up.

In fact, if Israel succeeds in killing the current generation of Hezbollah fighters, another generation would take its place, more militarized than the current one. There are no shortages of men willing to join the fight against Israel. “We will give our life to the

Sayyed [Nasrallah] at a moment’s notice” is a refrain I heard over and over from Shia teens in Lebanon.

Israel’s displacement of more than 1 million Lebanese people, most Shia, and the killing of more than 900 civilians guarantee an endless flow of recruits for years. Neither the US nor Israel pays adequate attention to this fact. 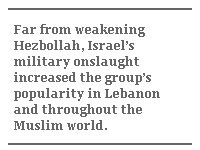 Another misunderstanding is that this is a proxy war against Iran and Syria. This is nonsense. Although armed and financed by Iran and Syria, Hezbollah has become more autonomous since Israel's 2000 withdrawal from Lebanon. Hezbollah, partially integrated into the Lebanese political landscape, could easily generate financial sources from within the country to carry on its social services.

Not only has the charismatic Nasrallah succeeded with an agenda inside Lebanon, he has made Hezbollah into the new vanguard of armed resistance to Israel and America in the eyes of tens of millions of Arabs and Muslims.

A long Israeli military campaign only weakens the democratically elected Lebanese government, making it less capable of expanding its sovereignty over the country. Far from weakening Hezbollah, Israel’s military onslaught increased the group’s popularity throughout the Muslim world.

A national poll conducted in Lebanon two weeks ago by the Beirut Center for Research and Information showed a sharp rise in support for Hezbollah since the Israeli invasion: 87 percent of respondents supported Hezbollah's military response, including 89 percent of Sunnis and 80 percent of Christians. Five months ago, just 58 percent supported Hezbollah’s right to remain armed. Also, 89 percent of the respondents said the US was not an honest broker, not responding positively to Lebanon's needs and concerns.

The carnage in Lebanon weakens pro-Western elements throughout the region. “The Arab people see Hezbollah as a hero because it is fighting Israel's aggression,” said Jordan's King Abdullah II, a key US ally who initially blamed Hezbollah for provoking the crisis.

The ceasefire came just in time to prevent the collapse of the Lebanese government, let alone people’s suffering. The route to peace is not military defeat of Hezbollah – an impossible task – but to broker a comprehensive Arab-Israeli peace treaty and enable the Shia community to integrate within Lebanese institutions. As long as a large segment

of the Shia community remains marginalized in Lebanon, Hezbollah's radical vision will prevail.

A consensus is emerging among the Lebanese political class that the status quo is no longer viable; the legitimate government must be the only agency possessing a monopoly on the use of force. Nasrallah recently hinted that the recent battle was the last that Hezbollah would fight, signaling that Hezbollah leadership could be willing to accept a political settlement that addresses its vital interests. Nasrallah also accepted the UN-declared ceasefire with reservation. In a televised announcement, Nasrallah said that his organization would abide by the ceasefire as long as Israeli troops stopped attacking and withdrew from southern Lebanon.

Instead of inaccurately dismissing the revolutionary organization as “terrorists” and relying solely on military muscle, Israel and the US need to back negotiations that are rooted in a nuanced understanding of the force they are determined to destroy. This entails a concerted effort by the international community, including the US, to assist Israel and its Arab neighbors in reaching a comprehensive historical settlement based on justice and security for all.

Fawaz A. Gerges, author of the recently published “Journey of the Jihadist: Inside Muslim Militancy,” is a Carnegie Scholar and professor of Middle East and International Affairs at Sarah Lawrence College, New York. He has just returned from Beirut.